II.5.1 Mendel’s laws apply in a slightly modified form to the transfer of genes located on sex chromosomes.s

In a great many species of animals and plants with separate male and female sex organs, the gene set contains special pairs of chromosomes, sex chromosomes. The presence or absence of one of these chromosomes or, to be more exact, the number of copies of some of its genes (their gene dose), which is dependent on the presence or absence of one of the sex chromosomes in the cell, determines whether a male or female develops from the zygote. There are a number of types of chromosome determination of sex but, because a great many phenomena connected with their existence are analogous, this chapter will consider only the Drosophila type. In this type, where humans also belong, the male has one X and one Y chromosome in the nucleus of his cells, while females have two X chromosomes and no Y chromosome. The male sex is thus heterogametic, which means that males form two types of gametes, half with chromosome X and half with chromosome Y. In contrast, females constitute a homogametic sex, i.e. all female gametes contain an X chromosome. When a female gamete is fertilized by a male gamete containing an X chromosome, the zygote is of type XX and a female is formed from it; if this is a gamete containing a Y chromosome, the zygote acquires genotype XY and a male is formed. In the Abraxas type, for example in butterflies and birds, the males are the homogametic sex and females are heterogametic. The nature of chromosomal sex determination has a number of important genetic and evolutionary consequences. For simplification, the following text will describe the situation only for the Drosophila type; however, quite analogous laws apply to the Abraxas type.

From the genetic standpoint, it is important that sons inherit their X-chromosome only from their mothers. Consequently, for example, sons cannot inherit from their fathers genetic diseases that are dependent on a gene on the X chromosome. In this case, daughters inherit the relevant gene from their fathers with 100% certainty. Another special feature of the sex X chromosome is that it is present in only a single specimen in the cells of males, i.e. in the hemizygote state. As a consequence, females frequently act as heterozygotes, symptom-free transferers of recessive alleles for genetic diseases, while these diseases are manifested in hemizygote males. The best known examples of these diseases are hemophilia and color blindness (Fig. II.13). 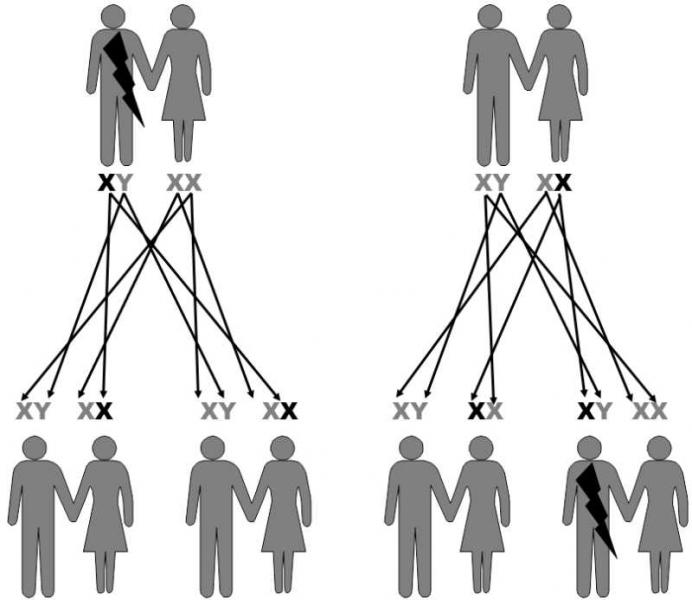 Fig. II.13 Inherited traits bound to the X-chromosome. A number of diseases, including some types of colour blindness and hemophilia are caused by recessive mutations in genes belonging to the X-chromosome. As males inherit their only X-chromosome from their mother, they cannot pass the particular disease on to their sons. In contrast, their daughters inherit the mutation from them in 100% of cases. As most of these mutations are recessive, the daughters do not exhibit the symptoms of the disease, but can pass this mutation on to half their offspring. As the X-chromosome is present in the genome of males in a single copy, i.e. they are hemizygote, the presence of the given mutation always appears in their phenotype.

From an evolutionary standpoint, it is important that the Y chromosome is present only in the cells of males and the X chromosome is present in two specimens in the cells of females and in one specimen in the cells of males. For sufficiently differentiated sex chromosomes, for which, in most species, crossing-over between chromosomes X and Y is to a major degree excluded, it is not possible for genes located on the Y chromosome to appear in the genome of a female under normal circumstances. Genes on chromosome X can be present in both the female and male organism but, because they are present in two copies in female cells, the genes present on an X chromosome spend an average of two thirds of their time in female organisms and one third in male organisms. In many cases, genes have sexually antagonistic effects, i.e. the opposite effects on the biological fitness of males and on the biological fitness of females (Chippindale, Gibson, & Rice 2001). As the genes on an X chromosome spend more time in female organisms, they will encompass more of those that will increase the biological fitness of females at the expense of the biological fitness of males. However, the situation is somewhat more complicated. Recessive genes increasing the fitness of males at the expense of females with two X-chromosomes are not manifested in females, unless their content increases to a degree where homozygote females will appear in the population. However, in males with one copy of the X-chromosome, their favourable properties can be manifested right from their formation. This means that recessive antagonistic genes giving males an advantage will occur more frequently on an X-chromosome than on an autosome. This could explain the fact that 40% of the genes active in spermatogonia are coded on the X-chromosome (Lercher et al. 2003). In contrast, genes on the Y chromosomes quite unambiguously prefer the interests of males. This can be manifested particularly in cases where the effects of the genes have a negative impact on the biological fitness of the maternal organism, in which the male embryo is developing, or when the effects of the genes are manifested at the level, e.g., of behavioural interactions of adult males and females. It was found that an unusually high percentage of genes that affect, for example, tooth size and other potential weapons capable of being used in battles of males for females, are present on Y chromosomes. Here, there is also an excess of genes expressed in the male sex organs or directly in the male sex cells (Olsson & Madsen 2001). Generally, however, Y chromosomes tend to have a low number of genes. According to some theories, this is a consequence of gradual inactivation of genes capable, through affecting the phenotype (e.g. behaviour) of males, of reducing the fitness of females and thus of reducing the average biological fitness of all members of the population (see the model of bluebeards, Chapter IV.9.1).  Another possible explanation could, however, be inactivation of genes through the action of the Muller’s ratchet in sections of a chromosome without genetic recombination (see XIII.3.1.7).

More mutations occur in the organisms of males than in the organisms of females (Kato et al. 1994; Shimmin, Chang, & Li 1993). Consequently, the substitution rate in the genes on Y chromosomes is greater and on X chromosomes is smaller than on other chromosomes, i.e. on autosomes, which spend, on an average, the same time in the organisms of males and females. As Y chromosomes occur only in males and X chromosomes are present more frequently in females than in males, from the standpoint of sex chromosomes, the effective size of the population (see V.3.2.1) is smaller than from the standpoint of autosomes. Amongst other things, this means that a greater proportion of weakly negative mutations and a smaller proportion of positive mutations are fixed on sex chromosomes as a consequence of genetic drift (see V.5) than on autosomes. The absence of recombination between chromosomes X and Y also has the consequence that the entire Y-chromosome, with the exception of the pseudoautosomal area, is inherited as a single haplotype. Consequently, it is strongly affected by the phenomenon of genetic draft, as a consequence of which the fate (fixation or disappearance) of neutral mutations is affected by the fate of selectively important mutations occurring on the same chromosome (see IX.4.2). This leads to a substantial reduction of polymorphism on the Y-chromosome.

Was this information useful for you?
The classical Darwinian theory of evolution can explain the evolution of adaptive traits only in asexual organisms. The frozen plasticity theory is much more general: It can also explain the origin and evolution of adaptive traits in both asexual and sexual organisms Read more
‹ II.5 The way genes are transferred from generation to generation is described by Mendel’s genetic laws. up II.5.2 Genes in the genomes of cell organelles of endosymbiotic origin are mostly responsible for cytoplasmic heredity. ›
Draft translation from: Evoluční biologie, 2. vydání (Evolutionary biology, 2nd edition), J. Flegr, Academia Prague 2009. The translation was not done by biologist, therefore any suggestion concerning proper scientific terminology and language usage are highly welcomed. You can send your comments to flegr