II.8.3 Dissimilar epigenetic modifications of genes in microgametes and macrogametes, i.e. genomic imprinting, cause genes from the father and genes from the mother to play different roles in the ontogenesis of an individual.

Geneticists originally assumed that it makes no difference, from the standpoint of the characteristics of an individual, which of its genes is inherited from the mother and which from the father. However, over time, a substantial amount of information has been accumulated demonstrating that this simple concept is not valid. It was found that some genes are expressed only from the sections of chromosomes derived from the father and others from sections derived from the mother. Genome imprinting is responsible for this phenomenon. Some sections of genes are labelled in the developing sex cells of the parent organism, e.g. by methylation, where this labelling differs in the male and in the female. The given gene is then expressed in the zygote according to how it is labelled. During the differentiation of sex cells, the sex-specific labelling of genes derived from the mother and from the father is “erased” and is replaced on all the chromosomes by sexually specific labelling corresponding to the sex of the individual in whose body the differentiation of sex cells occurs. In some cases, it seems that erasing of the methylation labels on the chromosome set derived from the father already occurs in the fertilized oocyte (Ferguson-Smith & Surani 2001). Genomic imprinting can, of course, take place in hermaphrodites; however, then the DNA of the sex cells will be labelled according to whether differentiation of the gamete occurs in the tissue of male or female sex organs.

Genome imprinting is most obvious in cases where there is a conflict of the biological “interests” of the father and mother in relation to the amount of resources that they are to invest in their future progeny (Burt & Trivers 1998). This situation frequently occurs in species where the embryos are formed inside the female organism, i.e. primarily in angiosperm plants (Hardling & Nilsson 2001) and in live-bearing animals, such as mammals (Moore & Haig 1991). As a female can reproduce with various males in the population during her lifetime, it can frequently happen that individual, simultaneously developing embryos can have different fathers. Consequently, the biological interests of genes derived from the father and from the mother can differ very substantially. It is in the interests of the gene derived from the father that a maximum of maternal resources be invested in the development of the embryo in which it is located. These investments can even occur at the expense of damage to the other developing embryos, which can have a different father and even at the cost of exhaustion or destruction of the maternal organism. The next offspring of the particular female could have a different father, so the genes of paternal origin need not take into account the future reproductive potential of the female. Thus, for example, imprinted genes of an embryo derived from the father can program the formation of a large placenta, from which the embryo would derive nutrients from the body of the mother, or can cause the production of hormones controlling the level of nutrients in the maternal organism, which can be manifested, e.g., in maternal diabetes (Haig 1993b). 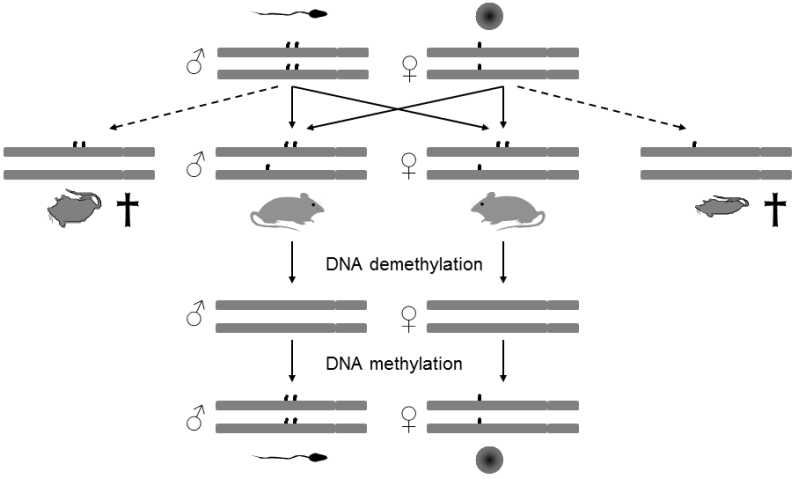 Fig. II.19 Genome imprinting. The DNA of sperm and of oocytes is imprinted on specific sites, i.e. labelled with methylation labels.  The presence of these labels determines whether and how intensively the relevant genes will be transcribed in the given DNA section. For normal development of the embryo, it is necessary that the zygote contain one copy of the relevant genes from the father and from the mother. If, for example, the zygote were to contain both copies of the particular gene from one of the parents or if one set of genes were not imprinted in the proper manner, serious developmental defects could occur, which that could lead to substantial reduction of the viability of the embryo. In normal individuals, development of the sex cells leads first to removal of the original methylation labels on both sets of chromosomes and subsequently to methylation of both sets in a manner that corresponds to the sex of the particular individual.

In contrast, the same genes derived from the mother are frequently inactive and are not expressed. In fact, some imprinted genes derived from the mother can even control the production of receptors that catch and thus destroy the products of imprinted paternal genes. If an embryo is formed in which there is a lack of imprinted genes from the mother or from the father in a certain locus and the genes from the other parent are present in twice the amount, the normal development of the embryo is usually seriously disturbed and some genetically (in this case, actually epigenetically) determined diseases can be formed in human beings. The best known of these in human beings are the Angelman syndrome, caused by the absence of a maternal copy of part of chromosome 15, the Prader-Willi syndrome, caused, on the other hand, by the absence of the paternal copy of the relevant gene, and the Beckwith-Wiedemann syndrome, caused, e.g., also by uniparental origin of part of chromosome 11 or disorders in imprinting this gene (Driscoll et al. 1992; Lalande 1996).

However, genome imprinting can be important in situations where there is no conflict of opposing interests of males and females (Pagel 1999). According to some authors, certain patterns of specific feminine behaviour and specific feminine abilities and skills (e.g. a number of elements of social intelligence) are coded on chromosome X through imprinted genes. These genes are active only when they lie on the chromosome derived from the father. As sons inherit their single X chromosome from their mother, it is ensured that the genes for particular feminine behaviour will be active only in the genome of individuals of female sex.

Attention was drawn to the existence of the phenomenon of genome imprinting primarily by cases where a disorder in cellular division meant that an individual obtained both copies of a certain DNA section only from one parent, rather than from both the mother and the father. In this case, the pattern of the given disorder usually differs according to whether the relevant section was derived from the father or from the mother. For example, women with Turner syndrome, i.e. with only a single X chromosome, differ in their social intelligence and adaptability according to whether their X chromosome is derived from their mother or from their father. In the former case, their behaviour frequently exhibits rather serious abnormalities; in the latter case, their behaviour is quite normal (Skuse & et al. 1997).

Was this information useful for you?
The classical Darwinian theory of evolution can explain the evolution of adaptive traits only in asexual organisms. The frozen plasticity theory is much more general: It can also explain the origin and evolution of adaptive traits in both asexual and sexual organisms Read more
‹ II.8.2 In a number of organisms, mechanisms of epigenetic inheritance are also involved in the transfer of phenotype plasticity traits from one generation to the next. up III MUTATIONS ›
Draft translation from: Evoluční biologie, 2. vydání (Evolutionary biology, 2nd edition), J. Flegr, Academia Prague 2009. The translation was not done by biologist, therefore any suggestion concerning proper scientific terminology and language usage are highly welcomed. You can send your comments to flegr