III.11 Fluctuation tests show that mutations occur randomly and are not environmentally directed.

As I mentioned above, some species are capable of generating a greater number of mutations under certain, usually stress conditions.This allows them to overcome the unfavourable conditions.Some authors are of the opinion that the organism is capable not only of  generating a suitable number of mutations, but that it is also capable of generating just those mutations that allow it to overcome the currently active unfavourable environmental factor.In other words, according to these concepts, organisms are capable of environmentally directed mutations.

The best known experiments that tested this possibility consist in replica plating tests (Ledeberg & Ledeberg 1952)and also various variants of the fluctuation test (Luria & Delbruck 1943).In the replica plating test (Fig. III.6), a bacteria suspension is seeded on a Petri dish and, 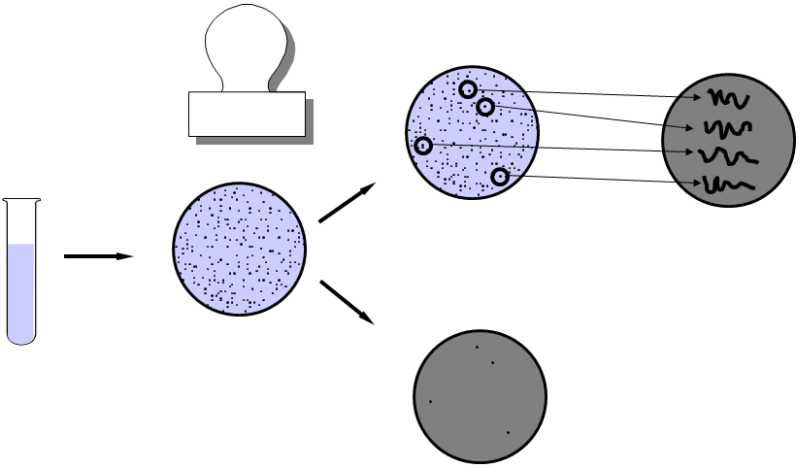 after small colonies are formed, they are imprinted using a large round stamp on a dish whose agar contains a suitable selection agent (e.g. a certain antiobiotic) and also on a dish without the antibiotic.Only colonies of mutated cells grow in the dish with the antibiotic.In the next phase, samples of the colonies are taken corresponding to the positions of the colonies of mutated cells in the dish without the antibiotic, i.e. samples of bacteria that never came into contact with this antibiotic, and their resistance is tested.If the mutations occurred only as a consequence of the action of the selection agent, the bacteria from these colonies should not be resistant.In contrast, if the mutations occurred randomly, bacteria from the original colonies should be resistant.The results of replica plating tests demonstrated that bacteria on the original dish are already resistant and thus that they mutated randomly.

In the fluctuation tests (Fig. III.7), we also determine whether the mutation providing 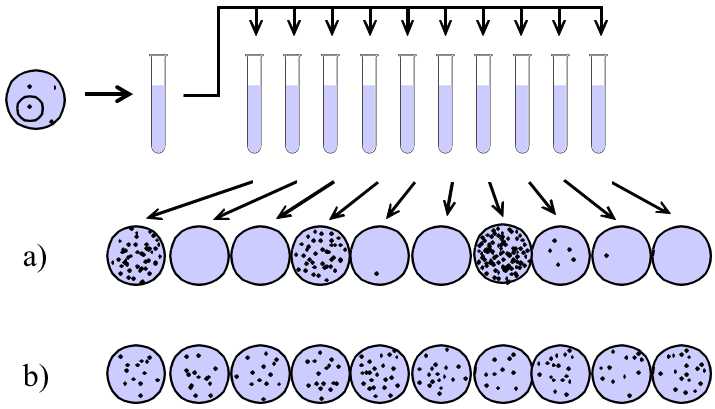 Fig. III.7. Fluctuation test. In this test, an inoculum of genetically identical bacteria resistant to a certain selection agent, e.g. to a certain antibiotic, is first prepared. Then this inoculum is used to inoculate a series of test tubes with liquid medium without this antibiotic and the bacteria are left to grow, e.g. for 24 hours. Finally, a sample of the bacteria from each test tube is inoculated on a Petri dish, whose agar substrate contains the studied antibiotic. Only colonies of resistant bacteria grow on the dishes; therefore the number of colonies on the dish corresponds to the number of mutants, i.e. resistant bacteria, that were originally seeded on the Petri dish. Result (a) corresponds to the situation where the bacteria are mutating in the test tube, while result (b) corresponds to the situation where the bacteria start to mutate on the dishes in the presence of the antibiotic.

resistance against a certain toxic agent occurred before addition of the selection agent or after its addition.The experiment can be performed by growing a larger innoculum of genetically identical bacteria from one cell, adding this innoculum in the same amount to a series of test tubes with fresh nutrient medium and leaving the bacteria to further multiply here, e.g., for 24 hours.Then a sample of bacteria from each test tube is seeded on one Petri dish containing an antibiotic to which all the bacteria were sensitive at the beginning of the experiment.After a certain time, e.g., after two days, we count the colonies of resistant bacteria on the individual dishes (unmutated bacteria, i.e. those sensitive to the antibiotic, do not grow on the dishes).If the mutations occurred only as a reaction to the presence of the antibiotic, then there should be approximately the same number of colonies on all the dishes or, to be more exact, the number of colonies should have Poisson distribution (Fig. III.8).If the mutations occurred spontaneously, i.e. before the bacteria came into contact with the 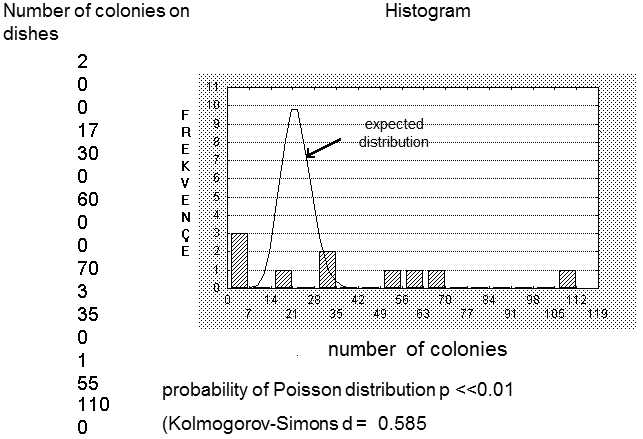 antibiotic, the numbers of colonies on the individual dishes should differ substantially, i.e. should substantially fluctuate.This is a result of the fact that a mutation can occur in the test tube prior to seeding on the dish at any moment; the mutant could multiply exponentially in the particular test tube up to the moment of seeding on the dish.If approximately the same number of mutations occurred in each test tube, the resultant numbers of colonies in the dishes would differ according to when the mutations occurred.If the particular mutation occurred just before seeding on the dish, then a single colony is obtained; however, if the same mutation occurred 3 hours prior to seeding then, for a generation time of the bacteria of, e.g., 30 minutes, the particular mutation can appear as the presence of up to 64 colonies on the dish.As the number of colonies on the dishes actually differed substantially in the laboratory experiments, fluctuation tests were considered until recently to be the strongest proof that mutations always occur randomly, spontaneously, and are not environmentally directed, i.e. induced  by the presence of an antibiotic.s

Was this information useful for you?
You voted 'more or less'.
The classical Darwinian theory of evolution can explain the evolution of adaptive traits only in asexual organisms. The frozen plasticity theory is much more general: It can also explain the origin and evolution of adaptive traits in both asexual and sexual organisms Read more
‹ III.10 The sites of the occurrence of mutations are distributed unevenly along the DNA chain. up III.11.1 Some fluctuation tests demonstrate that mutations can occur even in a non-growing culture. ›
Draft translation from: Evoluční biologie, 2. vydání (Evolutionary biology, 2nd edition), J. Flegr, Academia Prague 2009. The translation was not done by biologist, therefore any suggestion concerning proper scientific terminology and language usage are highly welcomed. You can send your comments to flegr