The results of fluctuation tests and our knowledge of the mechanisms of the formation of mutations indicate that, in general, organisms mutate randomly, and not in an environmentally directed manner.However, in a great many organisms, there exist specialized genetic mechanisms through which the organisms generate a certain, momentarily advantageous type of mutation in specific situations.These mechanisms permit the population of organisms to react adaptively in situations in which they find themselves repeatedly, although not very frequently.Contemporary evolutionary biology assumes that, similar to other adaptive processes or structures encountered in organisms, these mechanisms and necessary molecular apparatuses arise gradually through random mutations during evolution through the action of natural selection.

The hypervariability of the surface protein in the African trypanosome is an example of such a mechanism (Borst et al. 1997).During their life cycle in the organism of their host, these parasitic protozoa regularly and repeatedly encounter attacks by the immunity system.Most of these attacks are directed against the main antigen of the surface coat and the individual trypanosome is practically defenseless against them and is thus rapidly and reliably killed.  The defensive strategy of the protozoa lies in the fact that it has approximately 1000 genes for very different variants of this protein in its genome and, through mutations in the regulation regions of the individual genes, such as duplication translocation to the expression site, ensures that synthesis of the surface antigen is switched from one gene to the other in some individuals in the population.These events occur with relatively low frequency; at every instant in the body of the host, almost 100% of the protozoa express the same surface antigen.However, it is sufficient for at least several mutated cells with the minority antigen to survive the immunity response of the organism against the majority surface antigen.These again multiply in the host so that, sooner or later, it again develops a strong immune response against them.Less than 0.1% of the protozoa mostly survive the individual waves of immune response; however, the host is not able to completely rid itself of the parasite.A similar parasite strategy is also known for bacteria of the Borrelia and  Neisseria genera (Seifert & So 1988; Meyer 1987) and it can expected with certainty that it will be even more widely spread in nature.

Experiments have shown that antigen variability in parasites is actually ensured by hypermutability of specific DNA sections.The molecular mechanism of these mutations is quite well known and it is known that, for example in trypanosomes, they occur with a frequency of 0.01 and in borrelia with a frequency of 0.0001 – 0.001 per cell division.However, in some cases, the increased frequency of certain mutations can be only an apparent cause of a similar  phenomenon and the entire mechanism can function on the basis of some form of natural selection.An example could be the case of the formation of resistance against methotrexate through the multiplication (number of copies) of certain genes.If a gradually increasing amount of this inhibitor enzyme dihydrofolate reductase is added to long-term passage cultures of the protozoa Leishmaniamajor, or even to in vitro passage cultures of mammalian cells, in time a species of the protozoa (mammalian cells) is obtained that will be very resistant to this inhibitor.Study of the genome of these resistant species demonstrated that they have a multiple copies of the gene for dihydrofolate reductase (Schimke 1984; Grondin et al. 1998).A similar mechanism of formation of resistance is active for mosquitoes of the Culexgenus resistant to organophosphate insecticides (Callaghan et al. 1998).It is possible that this multiplication of genes occurs in the cell as a random mutation and is only anchored through natural selection under the condition of selection pressure from the inhibitor.However, it is also possible that a specific mechanism exists in the cells,which is capable of multiplying any genes whose transcription and subsequent translation to the protein molecule occurs at a velocity approaching the maximum velocity for the given gene.For example, if the enzyme dihydrofolate reductase is inhibited by the presence of methotrexate, the cell must synthesize a much greater number of molecules of the enzyme than a cell under normal conditions.Most of the molecules of the enzyme are immediately inhibited, so that transcription of mRNA from the relevant gene is regulated up to maximum possible rate.If the cell is capable of multiplying the gene for dihydrofolate reductase sufficiently so that it manages to compensate the inhibiting effect of methotrexate, transcription of mRNA will no longer have to occur at the maximum velocity and further multiplication of the gene will stop.

A very interesting situation can occur in the case of hypermutability of the variable part of the chains of immunoglobulins in B-lymphocytes (Berek 1992; Berek & Ziegner 1993).Here, the relevant processes occur at the intra-organism level and the relevant mutations are somatic mutations; however, all the processes are controlled by the same laws as similar processes at the inter-organism levels.

It was originally assumed that, in this case, the immune system employs the classical mechanism of Darwinistic evolution, i.e. generation of quite random mutations in the relevant regions of the immunoglobulin genes and selecting mutants with immunoglobulins with greater affinity for a foreign protein.However, there are two unexpected facts.The generation time for lymphocytes is many hours, while the actual process of affinity maturation lasts only a few days.Simultaneously, the number of selective intermediate stages and the number of mutations that must be gradually fixed is so large that it is practically impossible for the whole process to take place during a few cell generations, during which the process of antibody affinity maturation occurs (Manser 1990).In addition, when the individual mutants were studied as they were formed during affinity maturation, it began to be apparent that every mutation that was fixed increased the affinity of the immunoglobulins compared to the former state (Lavoie, Drohan, & Smithgill 1992).If the Darwinistic mechanism were active, we would expect that a substantial percentage of the mutations would be neutral, at the very least. 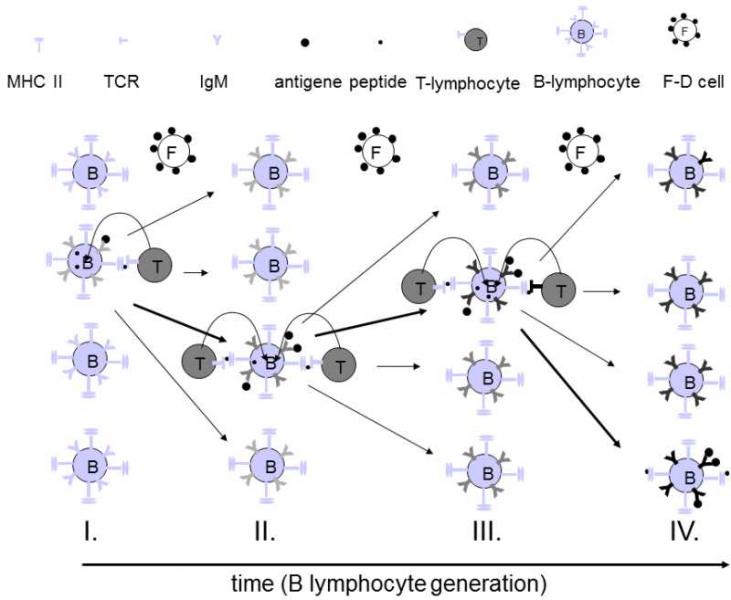 Fig. III.9. Maturation of antibody affinity. B-lymphocytes in the spleen follicles capture, using their surface immunoglobulins, the protein antigen that is slowly released in small amounts by the follicular dendritic cells. The B-lymphocytes internalize the bonded antigen, split it into the individual peptides and transport part of these peptides bound to their class II MHC-antigens to the cell surface. If the internalized protein was actually a foreign substance, it necessarily contains at least some peptides that do not occur in the organism’s own proteins. Thus, the follicles can contain T-lymphocytes (T-helper cells) that recognize some of the presented peptides through their T-cell receptor, i.e. have an affinity for the given peptide located at the binding site of the MHC-antigen. As soon as the T-lymphocyte recognizes the foreign peptide, it supplies a growth factor to the relevant B-lymphocyte and the B-lymphocyte can begin to divide. If the surface immunoglobulins of a certain B-lymphocyte bind only or at least preferentially the self proteins of the organism, then they present only or at least preferentially the self peptides and thus cannot receive assistance from the T-lymphocyte. Clones of the T-lymphocytes with receptors capable of recognizing the self peptides of the organism died during passage through thymus or were later inactivated.  Similarly, B-lymphocytes with immunoglobulin with subnormal affinity for the antigen bond only a small amount of antigen, acquire only a subnormal amount of the growth factor and cannot reproduce. Reproduction of lymphocytes is accompanied by frequent mutations in the hypervariable parts of the genes for immunoglobulin, changing the affinity of the immunoglobulin for the antigen and its cross-reactivity with the body’s own proteins. The mutated B-lymphocytes with the highest affinity for the antigen and the lowest cross-reactivity with the body’s own proteins capture most of the antigen for the other B-lymphocytes, present the greatest amount and the greatest proportion of foreign peptides and thus obtain the greatest amount of growth factor from the T-lymphocytes. They reproduce the most and a new mutant appears in time amongst their progeny, with even greater affinity for the foreign protein and even lower cross-reactivity with its own proteins. During a number of these selection steps, mutants are selected with immunoglobulin exhibiting affinity for the given antigen that is several orders of magnitude higher than that of the original B-lymphocyte clone. This scenario is, of course, somewhat simplified and corresponds approximately to knowledge available in the mid-1990’s. It is possible that substantial changes will occur in the future

So far, this was an example of classical Darwinistic evolution of which we have, however, already stated that it cannot adequately explain the process of affinity maturation because of the inadequate number of generations of lymphocytes and absence of neutral mutations.The authors of the alternative model (Fig. III.10) assume that the cells must mutate in the quiescent state, i.e. when they 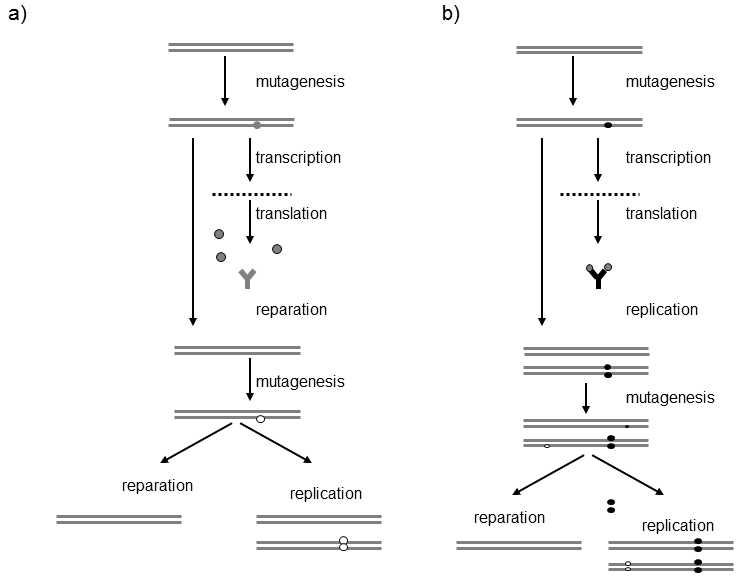 Fig. III.10. Model of fixation of adaptive mutations during maturation of antibody affinity.  The model assumes that mutation in the hypervariable parts of the genes for immunoglobulin occurs in only one, specifically in the DNA (+)-chain, i.e. the template for mRNA synthesis. Surface immunoglobulin of the B-lymphocyte is formed during transcription and translocation on the basis of the mutated DNA (+) chain. If the immunoglobulin has higher affinity for the antigen or lower cross-reactivity with the body’s own antigens (a), the B-lymphocyte gains the growth factor from the T-lymphocyte (see Fig. III.7). As soon as the lymphocyte undergoes nuclear division and its DNA undergoes replication, the relevant advantageous mutation is fixed in one of the pair of lymphocytes as both the DNA chains will contain the relevant mutation. If the mutation was neutral or disadvantageous from the standpoint of affinity and cross-reactivity, the B-lymphocyte  does not obtain the growth factor from the T-lymphocyte and thus cannot replicate its DNA or divide. Instead, after a certain time, it repairs the mutations in the DNA (+)-chain according to the original sequence in the DNA (-)-chain, new mutations are generated in the DNA (+)-chain and the whole cycle is repeated. This model still remains hypothetical in 2008 and it is quite possible that the entire process actually occurs through a completely different mechanism.

are not dividing and, in addition, those mutations that do not lead to increased antigen affinity must be repaired.One of the mechanisms through which the lymphocytes could achieve these goals is as follows:The lymphocyte is capable of somehow generating mutations solely in the (+)-chains of the DNA of the gene for immunoglobulin, i.e. in the chain from which the mRNA for immunoglobulin is transcribed.After some time, both DNA chains are fitted together and the sequence of nucleotides in the (+)-chain is repaired according to the sequence in the (-)-chain.However, if one of the mutations is manifested in an increase in the affinity of the immunoglobulin for the antigen, then the B-lymphocyte obtaines the growth factor from the auxiliary T-lymphocyte and divides before the mutation in the (+)-chain can be repaired.As soon as replication occurs in the given DNA section, the mutation is definitively fixed in one of the two daughter cells and cannot be repaired.

This hypothetic model is only one of a number of possible models (Steele, Rothenfluh, & Blanden 1997).It will be interesting in the future to learn which mechanism was actually chosen by evolution to enable the immune system to avoid the greatest drawbacks of Darwinistic evolution, the inability to generate targeted (environmentally directed) mutations.

Was this information useful for you?
You voted 'yes'.
The classical Darwinian theory of evolution can explain the evolution of adaptive traits only in asexual organisms. The frozen plasticity theory is much more general: It can also explain the origin and evolution of adaptive traits in both asexual and sexual organisms Read more
‹ III.11.1 Some fluctuation tests demonstrate that mutations can occur even in a non-growing culture. up III.13 The possibility of environmentally directed mutations alone would still not suffice for Lamarckian evolution. ›
Draft translation from: Evoluční biologie, 2. vydání (Evolutionary biology, 2nd edition), J. Flegr, Academia Prague 2009. The translation was not done by biologist, therefore any suggestion concerning proper scientific terminology and language usage are highly welcomed. You can send your comments to flegr