III.7 Spontaneous and induced mutations can be differentiated according to their causes

Spontaneousand induced mutations can be differentiated according to the causes of their formation.The existence of induced mutations was already demonstrated in the 1920’s, when the effect of radiation on organisms was first studied.Since then, it has been shown that a great many physical and especially chemical factors can cause the formation of mutations in organisms.The exact mechanisms of their action are known for a great many factors, i.e. the specific course of the chemical reaction that leads to replacement of one nucleotide by another, to insertion, deletion or fission.

In fact, the existence of spontaneous mutations was doubted for some time.Some biologists assumed that all mutations are actually caused by external effects, mutagens, occurring in the environment.However, it was gradually demonstrated that there are some categories of mutations that are actually spontaneous.The most typical example consists in mutations that occur through inclusion of the incorrect nucleotide during DNA replication as a consequence of statistically random transitions of individual bases to less common structural forms, i.e. tautomeric transitions (Cox 1976).The individual bases are present in these forms for only a short time (10–5–10–4 s), after which they spontaneously return to the usual form (Fersht 1980).Bases in the unusual forms can form hydrogen bonds with the wrong nucleotides so that, during replication, the wrong nucleotide is included in the synthesized  chain with a certain, non-zero probability.For example, the enol form of T pairs with C (instead of with A) and the imino-form of C pairs with A (instead of with G) (Fig. III.5).The 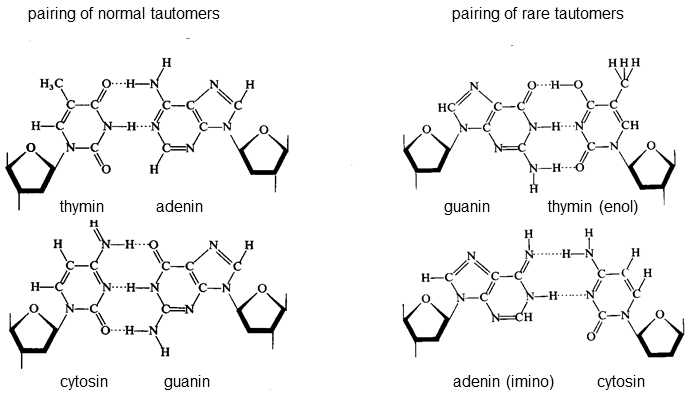 enzyme DNA-polymerase exhibits 3’-5’-nuclease activity, so that it is mostly capable of eliminating these mutations; a large part of the remaining mutations are repaired by subsequently acting  specialized repair systems, which are capable of differentiating which of the unpaired nucleotides is located in the newly synthesized chain and thus which must be repaired.However, some mutations are not repaired and remain a permanent part of the DNA.It is assumed that the frequency of mutations in human beings is 10–10 /nucleotide/cell cycle.During a human lifetime, mutation affects each 4th base in the DNA of brain cells and each base is replaced on an average of 5x as a result of repair processes (Holmquist & Filipski 1994).s

Was this information useful for you?
The classical Darwinian theory of evolution can explain the evolution of adaptive traits only in asexual organisms. The frozen plasticity theory is much more general: It can also explain the origin and evolution of adaptive traits in both asexual and sexual organisms Read more
‹ III.6 Mutations can be differentiated as positive, negative and selectively neutral on the basis of their effect on the biological fitness of the organism. up III.8 Evolution apparently optimized the frequency of spontaneous mutations ›
Draft translation from: Evoluční biologie, 2. vydání (Evolutionary biology, 2nd edition), J. Flegr, Academia Prague 2009. The translation was not done by biologist, therefore any suggestion concerning proper scientific terminology and language usage are highly welcomed. You can send your comments to flegr