IV.2 All types of selection can exist in two basic forms – soft and hard

From the standpoint of microevolution, soft selection is apparently a more effective evolutionary factor than hard selection (Fig. IV.1).While a species can extricate itself from the effects of hard selection 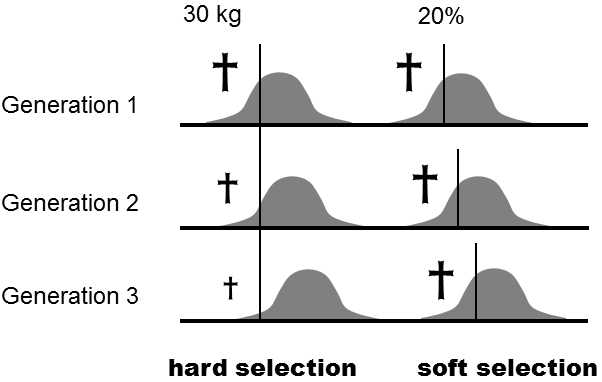 (for example, by increasing its bodily dimensions above a certain critical value), it cannot escape from soft selection; a constant percentage of individuals will be eliminated in every generation without regard to an increase in the mean value of the critical parameter.However, hard selection can be effective over prolonged period of time in a changing environment or in an environment whose properties oscillate in the medium-term.Similarly, from the standpoint of macroevolution, hard selection which, under certain circumstances, can lead to the extinction of a particular species, can apparently be of substantial importance.

Was this information useful for you?
The classical Darwinian theory of evolution can explain the evolution of adaptive traits only in asexual organisms. The frozen plasticity theory is much more general: It can also explain the origin and evolution of adaptive traits in both asexual and sexual organisms Read more
‹ IV.1 At the very least, natural selection comprises environmental selection and sexual selection up IV.2.1 Haldane’s dilemma applies only to hard selection ›
Draft translation from: Evoluční biologie, 2. vydání (Evolutionary biology, 2nd edition), J. Flegr, Academia Prague 2009. The translation was not done by biologist, therefore any suggestion concerning proper scientific terminology and language usage are highly welcomed. You can send your comments to flegr