VII.2.4 Gene flow reduces differences in the frequency of alleles between populations.

where m is the intensity of the gene flow, namely the fraction of those copies of a given allele in the subpopulation that were introduced via migration within one generation. Thus the change in frequency

attains the value pn after n generations, where

The gene flow thus acts to gradually reduce the differences in allele frequency between subpopulations and, if no other evolutionary mechanisms act in the opposite direction, such as selection, drift, evolutionary drives or mutations, the frequencies would ultimately be the same in the whole metapopulation (Fig. VII.4). 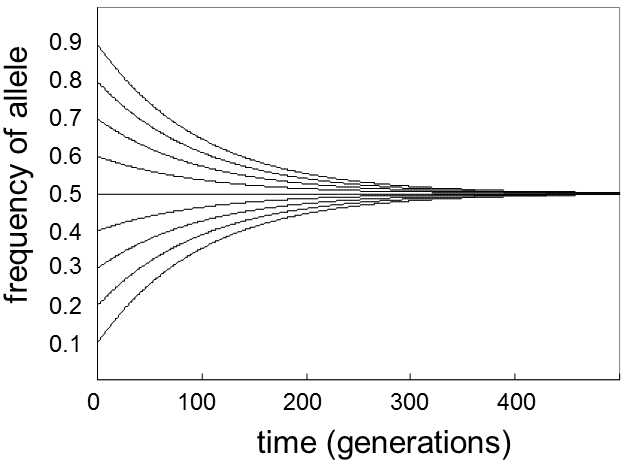 Was this information useful for you?
The classical Darwinian theory of evolution can explain the evolution of adaptive traits only in asexual organisms. The frozen plasticity theory is much more general: It can also explain the origin and evolution of adaptive traits in both asexual and sexual organisms Read more
‹ VII.2.3 Emergence and disappearance of local populations within a metapopulation may contribute to both higher and lower genetic polymorphism of the population. up VII.2.4.1 Even very low-intensity gene flow can prevent population diversification by genetic drift. ›
Draft translation from: Evoluční biologie, 2. vydání (Evolutionary biology, 2nd edition), J. Flegr, Academia Prague 2009. The translation was not done by biologist, therefore any suggestion concerning proper scientific terminology and language usage are highly welcomed. You can send your comments to flegr