VII.3 The shifting balance theory highlights the fact that adaptive evolution will more easily occur in a structured population with suitable gene flow intensity than in an unstructured one.

Relatively strong barriers to adaptive evolution exist in unstructured populations. This is because, in order to modify the phenotype of organisms – a prerequisite for a change in the environmental niche – the population must often pass through intermediate stages during which the organisms are already less adapted to utilize the old niche but not yet perfectly adapted to utilize the new niche. Another major obstacle to a population’s adaptive response to selection pressure lies in the genetic architecture of the phenotype traits, namely in the fact that alleles that, in their dominant status or in combination with particular alleles in other loci, help to create a particular trait very frequently in their heterozygotous state or, in combination with other alleles in other loci, participate in the creation of a completely different trait. The shifting balance theory formulated by Sewal Wright (Wright 1931; Wright 1982) in the 1930’s assumes that adaptive traits that cannot be fixed in a large unstructured population can be more easily fixed in a large structured population, i.e. in a population consisting of a large number of genetically and environmentally partly isolated small populations (Fig. VII.5). 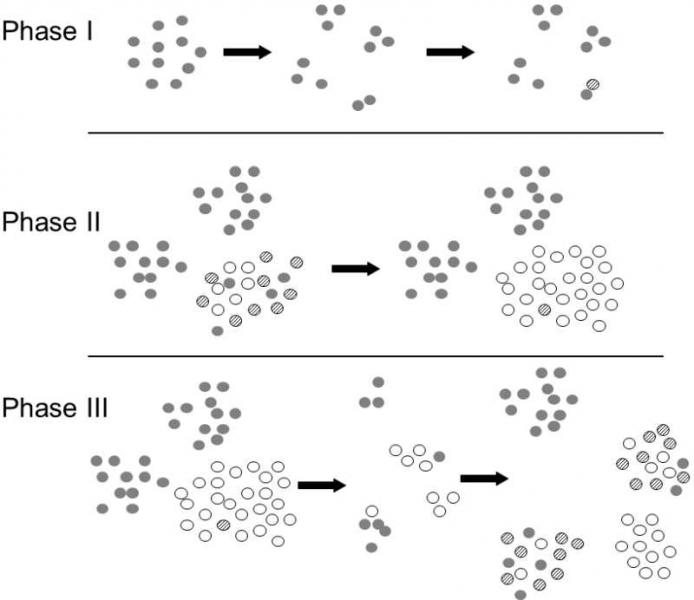 Dividing the population into a series of relatively isolated partial populations will, amongst other things, change non-additive genetic variability into additive genetic variability (Wade & Goodnight 1998)(see also II.7) which can, indeed, serve as the material for directional selection. Wright believed that evolution of an adaptive trait in a structured population has, in a certain sense, three stages. During the first stage, genetic drift in some small populations causes a shift in allele frequencies in favour of alleles that, in a particular combination, can determine a useful phenotype. During the second stage, the relevant alleles, and thus the relevant phenotype, are fixed in some of these populations through natural selection. In the third stage, group selection through migrants infecting other populations or establishing new populations causes the relevant alleles to spread newly throughout the metapopulation until they finally become generally fixed. Gene flow plays a crucial role in all three stages. In the first and second stage, high-intensity gene flow reduces the likelihood of useful trait fixation; in the third stage, on the contrary, it increases this probability. The validity of this model has repeatedly been confirmed by a number of theoretical (Barton & Rouhani 1993, 12322)and empirical studies (Katz & Young 1975; Wade & Goodnight 1991). However, some studies (Schamber & Muir 2001)did not confirm the conclusions of Wright’s shifting balance theory quite as clearly and the theory is therefore still a subject of discussion (Coyne, Barton, & Turelli 1997; Coyne, Barton, & Turelli 2000). Its opponents mostly argue that the theory is too complex and that the rise of adaptive traits through directional selection can be explained by even the simplest model of Darwinian selection in a large unstructured population. Its advocates, on the other hand, respond by arguing that the simplicity or complexity of a theory cannot be the final criterion of its accuracy (Peck, Ellner, & Gould 2000)and that Wright’s theory can explain even the fixation of alleles that, according to the simple neo-Darwinian model of selection, should not become fixed in large unstructured populations.

Was this information useful for you?
The classical Darwinian theory of evolution can explain the evolution of adaptive traits only in asexual organisms. The frozen plasticity theory is much more general: It can also explain the origin and evolution of adaptive traits in both asexual and sexual organisms Read more
‹ VII.2.5.1 Gene flow may spatially limit the range of the species. up VIII POLYMORPHISM ›
Draft translation from: Evoluční biologie, 2. vydání (Evolutionary biology, 2nd edition), J. Flegr, Academia Prague 2009. The translation was not done by biologist, therefore any suggestion concerning proper scientific terminology and language usage are highly welcomed. You can send your comments to flegr