If pseudopolymorphism is not taken into consideration, i.e. the presence of neutral mutations, that do not in any way appear in the phenotype of the organisms (i.e. if the location of zones on an electrophoretogram is not considered to constitute part of the phenotype), it is found that two groups of polymorphic genes exist.The first group consists in genes that occur in the population with great frequency in one standard form and in much lower frequency, usually less than 1%, in minority forms.For these alleles, it is generally assumed that they occur only temporarily here or that they are maintained as a result of the dynamic equilibrium of two processes – mutation pressure, i.e. constant formation of new alleles from the majority standard allele during mutagenesis, and selection, i.e. constant disappearance of the mutated alleles from the population.Polymorphism, caused by the temporary presence of rare alleles in the population, will be termed Type I polymorphism and will be discussed primarily in Chapter IX, devoted to the evolution of the DNA sequence and proteins.

However, for the second group of genes, it is difficult to say which allele is standard and which is mutated as they all, or at least a great many of them, occur in the population in high frequency (Fig. VIII.1).This type of polymorphism is maintained over long periods in the population through the action of 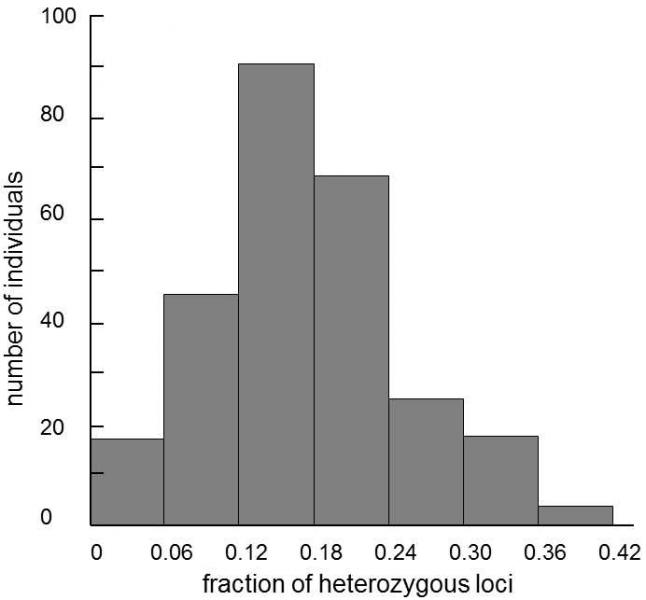 Fig. VIII.1. Intra-population polymorphism. The fraction of heterozygote individuals is a good measure of intra-population polymorphism. This parameter reflects both the number of alleles occurring in the population and the evenness of their occurrence. The histogram depicts the distribution of the portion of heterozygote loci in 257 starfish of the Ophiomusium lymani species. Data from Ayala and Valentin (1974), modified according to Dobzhansky et al. (1977).

specific mechanisms and is of incomparably greater importance from the viewpoint of evolutionary and ecological processes.Here, it will be termed Type II polymorphism and will constitute the subject of this chapter.

Was this information useful for you?
The classical Darwinian theory of evolution can explain the evolution of adaptive traits only in asexual organisms. The frozen plasticity theory is much more general: It can also explain the origin and evolution of adaptive traits in both asexual and sexual organisms Read more
‹ VIII.2 Almost all genes are present in many variants in the population, yet most differences between the variants are caused by neutral mutations up VIII.4 Type II polymorphism can be maintained in the population only by specific mechanisms ›
Draft translation from: Evoluční biologie, 2. vydání (Evolutionary biology, 2nd edition), J. Flegr, Academia Prague 2009. The translation was not done by biologist, therefore any suggestion concerning proper scientific terminology and language usage are highly welcomed. You can send your comments to flegr