VIII.5 Polymorphism can enhance efficient use of the available resources while simultaneously changing the evolutionary potential of a population

The existence of polymorphism within a population is of substantial importance both from the perspective of ecological processes and also from the microevolutionary and macroevolutionary viewpoints.From an ecological perspective, it is important that a polymorphic population is capable of utilizing very varied resources and consequently of utilizing its environment more economically.A polymorphic species is also less vulnerable to random fluctuations in the environmental conditions, as at least part of the population can survive even during drastic changes. 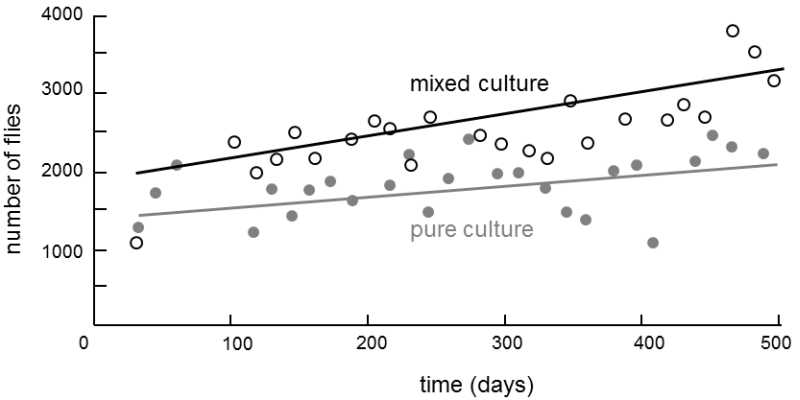 need not wait for the formation of new mutations and can use the already-present variability.As the fate of isolated new mutations immediately after their formation is determined primarily by accident (see V.3.1), it is far more advantageous if potentially suitable variants occur in the population with sufficient frequency right at the beginning.In addition, in case of cyclic changes in the environment, it is ensured that the genetic composition of the population can readily return to the original state after the environmental conditions go back to their original values (Fig. VIII.12).According to some 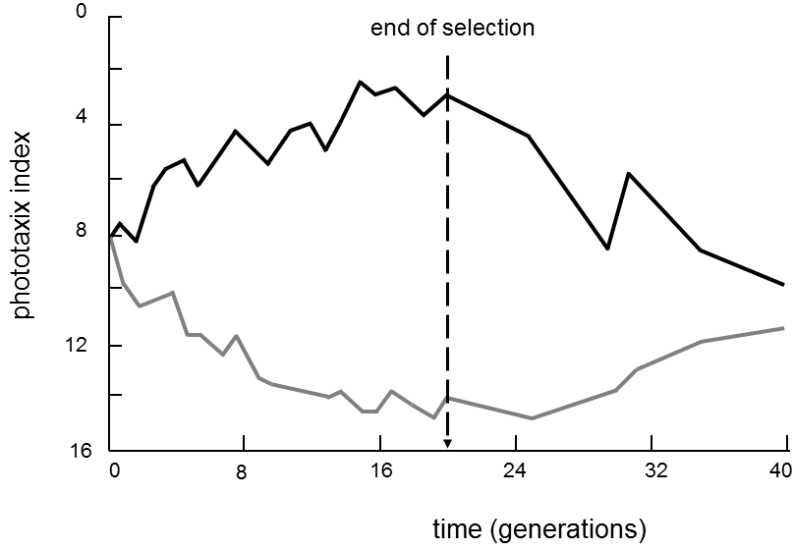 Fig. VIII.12. Return of the average phenotype to the original values after termination of selection. A population of drosophila was divided into two parts, one of which was subjected to long-term selection for positive phototaxis (movement towards a light in a Y-maze) and the second to negative phototaxis (movement into darkness). During twenty generations, the population diverged substantially in this trait. After termination of selection, the average phenotypes in both populations returned to the original value during the subsequent twenty generations. Data from Dobzhansky and Spassky (1969), modified according to Dobzhansky et al. (1977).

theories, it is this reversibility of microevolutionary changes that is mainly responsible for the greater evolutionary success of sexually reproducing species (Williams 1975), (Flegr 2008 ). In asexual species, the composition of the gene pool of the population follows even temporary environmental changes.Thus, all the alleles that are essential for their bearers under normal conditions can be very easily lost from the population during short-term changes.This can understandably be very disadvantageous for an asexual species in the medium term.

From the perspective of long-term or even permanent changes in the environment, and thus, for example, from the perspective of macroevolutionary processes, the impact of polymorphism on the progress and rate of evolution can be quite the opposite (Flegr 1998).Due to the phenomenon of genetic homeostasis andepistatic interactions, the effectiveness of natural selection is greatly limited in polymorphic sexually reproducing populations (see IV.9.2).Thus, populations and species react to the action of selection pressure only through a shift in the frequencies of individual alleles that are already present in the gene pool, while the fixation of new alleles through selection is greatly limited.Thus, a genetically polymorphic species remains selectionally frozen and anagenetic changes can occur only following a drastic reduction in the polymorphism, for example, in connection with a long-term drastic reduction in population size(see V.2.2).

Was this information useful for you?
The classical Darwinian theory of evolution can explain the evolution of adaptive traits only in asexual organisms. The frozen plasticity theory is much more general: It can also explain the origin and evolution of adaptive traits in both asexual and sexual organisms Read more
‹ VIII.4.5 A large part of polymorphism in a population seems to be maintained as a result of various epistatic interactions. up IX DNA SEQUENCE EVOLUTION ›
Draft translation from: Evoluční biologie, 2. vydání (Evolutionary biology, 2nd edition), J. Flegr, Academia Prague 2009. The translation was not done by biologist, therefore any suggestion concerning proper scientific terminology and language usage are highly welcomed. You can send your comments to flegr