X.3.1.1 Coacervates may exhibit growth and metabolism, but these are only analogies of the corresponding biological processes

Coacervateis a sort of primitive physical model of protocells (Oparin 1980; Miller, Schopf, & Lazcano 1997).Its most important property is the existence of a semi-permeable membrane that separates the inner and outer environment of the coacervate.Structures of the coacervate type are formed relatively easily in colloidal solutions with various chemical compositions through the effect of hydrophobic and hydrophilic interactions.If coacervates contain, in their interior, molecules exhibiting enzymatic activity (in experiments actual enzymes are used) and the medium contains the relevant substrate, for which the coacervate membrane is permeable, in contrast to the reaction products, then the reaction product must be gradually accumulated inside the coacervate.Water enters the interior of the coacervate through the effect of osmotic pressure until it becomes unstable and breaks and divides into a number of daughter coacervates.However, the basic problem is that the molecule with enzymatic activity is not reproduced during this cycle, so that these molecules gradually become more dilute during the division of coacervates.Thus, the cycle of growth and division of coacervates (Fig. X.2) is only a superficial analogy of the self-reproduction cycle of living organisms and it is not at all clear how a system capable of actual biological evolution could be developed on this basis.In addition, the coacervate hypothesis implicitly assumes the existence of a molecule with enzymatic activity but does not provide any idea about how these molecules could be formed. 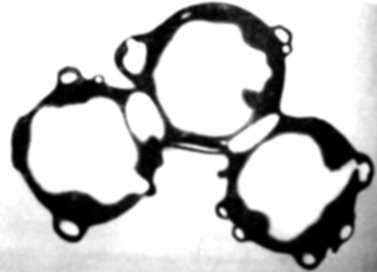 Fig. X.3. Microspheres. Hollow regular or irregular species are formed by dissolving or repeated dissolving and drying proteinoids. The shape and size of the species depend on the composition of the initial mixture of aminoacids and solvents. According to Sekerka (1980)

Was this information useful for you?
The classical Darwinian theory of evolution can explain the evolution of adaptive traits only in asexual organisms. The frozen plasticity theory is much more general: It can also explain the origin and evolution of adaptive traits in both asexual and sexual organisms Read more
‹ X.3.1 Systems containing proteins, but not nucleic acids, could have been present at the beginning up X.3.1.2 Microspheres exhibit enzymatic activity but not reproduction and heredity, and can thus not become the subject of biological evolution ›
Draft translation from: Evoluční biologie, 2. vydání (Evolutionary biology, 2nd edition), J. Flegr, Academia Prague 2009. The translation was not done by biologist, therefore any suggestion concerning proper scientific terminology and language usage are highly welcomed. You can send your comments to flegr