X.3.2 Systems containing nucleic acids, but not proteins, could have been present at the beginning

This hypothesis apparently has the most advocates at the present time.This is also sometimes termed the gene hypothesis of the origin of life.The hypothesis assumes that the original structure that was already capable of biological evolution could have been a nucleic acid or a chemically similar substance (Kolb, Dworkin, & Miller 1994; Miller 1997; Nelson, Levy, & Miller 2000; Orgel 2000). This nucleic acid apparently did not originally have any metabolic activity and also did not have any information for synthesis of proteins or other compounds, but was capable of self-replication under suitable conditions.The best-known variant of the gene hypothesis of the origin of life assumes that the original polymer was RNA (Hirao & Ellington 1995; James & Ellington 1995; Hager, Pollard, & Szostak 1996).Consequently, this hypothesis is frequently termed the RNA world hypothesis (Gilbert 1986).

Non-enzymatic synthesis of the complementary nucleic acid chain is very ineffective but, at the very least, possible in principle (Orgel 1992; Joyce 1984; Kanavarioti 1994)(Fig. X.6).It can be imagined that, in an environment containing a sufficient number of precursors (activated nucleotides), in which periodic temperature changes also occurred, a cycle of replication of oligonucleotides (short nucleic acid segments) could have emerged.At high temperatures, the double-helix oligonucleotide molecules could have been denatured to form the individual helixes; at low temperatures, the complementary nucleotide settled on these helixes and combined covalently, through a momentarily unclear mechanism, to form a new helix that was complementary to the original helix.Following repeated increase and decrease in temperature, the entire cycle of denaturation and replication of the oligonucleotides was repeated. 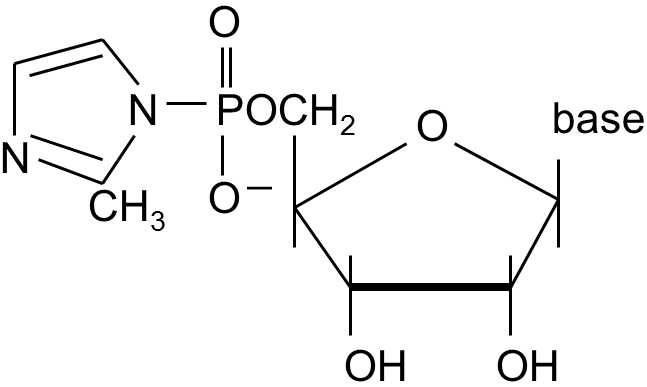 Fig. X.6. Nonenzymatic replication of a nucleic acid. Suitably activated monomers of nucleic acids can spontaneously specifically fit to a complementary nucleotide of the polynucleotide chain and subsequently create a linear polymer without participation by any enzyme at all. The scheme depicts the formula of mononucleotid-5’-phospho-2-methylimidizole, i.e. a compound that is capable of acting as a nucleic acid precursor. However, in this case, it is necessary that the first chain (template) contain a substantial predominance of cystine. According to Joyce (1984).

It is not difficult to imagine that the secondary or tertiary structures of some oligonucleotides could exhibit affinity for certain molecules located in the environment, for example, for some proteinoids, and that their interactions with these molecules could be in some way advantageous from the viewpoint of the autoreplication cycle.For example, the bonding of the proteinoid or a peptide to the oligonucleotide could change the density of the complex and, as a consequence of this change, the complex could be relocated to a different place in the environment, for example, to a place with high temperature.This could lead to its denaturation and dissociation into two complementary chains and the proteinoid.This again changed the density of the chains and they returned to the colder areas, where their self-replication could occur and, in time, also association with new proteinoid molecules.An oligonucleotide with affinity for a proteinoid thus attained a certain degree of independence on temperature changes in the environment, providing it with a clear advantage over its competitors, i.e. the other oligonucleotides.

Was this information useful for you?
The classical Darwinian theory of evolution can explain the evolution of adaptive traits only in asexual organisms. The frozen plasticity theory is much more general: It can also explain the origin and evolution of adaptive traits in both asexual and sexual organisms Read more
‹ X.3.1.3 Hypercycle models enable testing of whether spatially defined structures constitute a necessary condition for biological evolution up X.3.2.1 Ribozymes and coenzymes can be the relics of a time of “life without proteins”, a time when nucleic acids performed all biological functions, including catalytic functions ›
Draft translation from: Evoluční biologie, 2. vydání (Evolutionary biology, 2nd edition), J. Flegr, Academia Prague 2009. The translation was not done by biologist, therefore any suggestion concerning proper scientific terminology and language usage are highly welcomed. You can send your comments to flegr