XI.4 Diploid organisms contain at least two copies of each gene, yet the mechanism of formation of a new gene from one of the copies is rather complicated

The period in the development of living systems, in which the evolution of new genes occurs, is not entirely clear.According to some opinions, most new genes are formed in the initial stages of evolution in single-cell organisms similar to modern bacteria.Later stages of evolution tended to be characterized by changes in the means of regulation of expression of the existing genes rather than by the formation of new genes (Wagner 2000).According to this concept, especially the evolution of multicellular organisms tended to occur from the very beginning as the accumulation of changes in the genes regulating ontogenetic processes rather than by the formation of new genes.s

However, compared to haploid organisms, diploid organisms have a great advantage in that there are at least two copies of each gene in the nucleus.At first glance, it might seem that the reserve copy of each gene could become a substrate for the formation of a new gene at any time.However, the situation is somewhat more complicated (Lewis & Wolpert 1979)(Fig. XI.2). 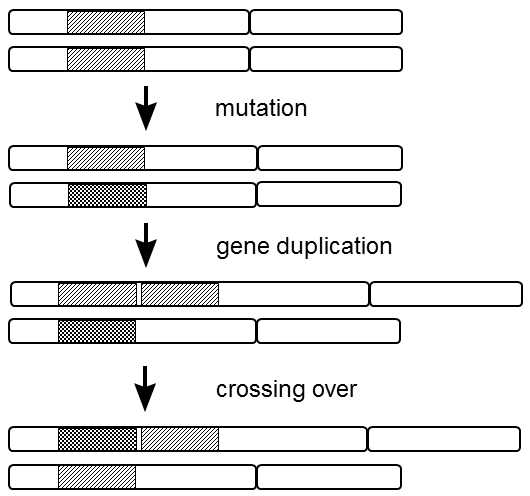 Fig. XI.2 Mechanism of formation of a new gene in diploid organisms. In the first stage, accumulation of mutations leads to the formation of the allele of a certain gene determining the formation of a protein with a new function. Initially, the allele is propagated most frequently by selection in favor of heterozygotes exhibiting both the old and the new function. As the frequency of new alleles increases, homozygotes carrying only two new alleles are more and more often created by genetic segregation of chromosomes during meiosis. These homozygotes have lower biological fitness as they lack the protein with the original function. Selection pressure arises for duplication of the old gene, i.e. for formation of a new locus. When the frequency of chromosomes with the particular duplication increases sufficiently, it is very probable that recombined chromosomes will be formed, bearing the old allele in one locus and the new allele in the other locus. The spreading of these chromosomes is strongly supported by natural selection, as their carriers will have proteins with the old and the new function, similar to the original heterozygotes, and simultaneously will not split off the less viable homozygotes.

The existence of diploidy is closely connected with the existence of sexual reproduction. Without this, it could not be maintained in the long term; nominally diploid nonsexually reproducing organisms would, over time, be converted into functionally haploidl organisms through gradual accumulation of loss mutations.During their life cycles, sexually reproducing organisms pass through a haploid phase, in which the presence of an inactivated allele could be theoretically manifested.In actual fact, however, the traits of the gamete tend to be controlled by the genes of the diploid genome of the parent organism rather than the genes of the actual haploid genome of the gamete, so that the presence of an inactive allele mostly does not affect the viability of the gamete.However, even under these conditions, “reserve” copies of the genes are not freely available for the formation of new genes.Of course, one of the copies in the cell can cease to fulfill its original biological function as a consequence of a mutation and may begin to fulfill a different function.From the viewpoint of the two genes, the carrier of the mutated allele is actually a heterozygote.If the mutated allele is capable of fulfilling a new, useful function, then, in comparison with a homozygote containing both originally unmutated alleles, a heterozygote is at a selectional advantage.If a mutated allele is present in the population in low frequency, it is basically present only in this heterozygous state, so that its frequency in the population gradually increases through natural selection.As soon as its frequency increases over a certain level, homozygotes with two copies of the mutated allele and no original allele begin to appear more frequently in the population due to segregation of chromosomes during sexual reproduction.These homozygotes can be completely or partly unviable, creating consistent selection pressure against the homozygous carriers of the mutated allele, which can be highly advantageous in the heterozygote state.This selection pressure can finally lead to duplication of the particular gene, leading to the formation of a new locus for the particular gene.In time, quite logically, recombination occurs in the section between the old and the new locus, in which the old and new allele of the particular gene end up on a single chromosomeAt the latest, from this point, there is no sense in speaking about the alleles of a single gene, but rather of two different genes, the old and the new.The carriers of a chromosome with both genes are then at a clear advantage, without regard to whether they have the particular gene in the heterozygous or homozygous state.

Thus, the mechanism of the formation of a new gene in a diploid organism is more complicated than the mechanism of formation of a new gene in a haploid organism; however, this occurs more readily and with much greater frequency.The formation of a new gene in a haploid organism requires two highly improbable, mutually independent events:duplication of a certain gene that, in itself does not bring the organism any advantage, and mutation in one of the copies of the duplicated gene, which changes the biological function of the product of this gene.The first step is not necessary in a diploid organism (all the genes are present in the cell in two copies), the second step has the same probability as in a haploid cell, and the third and fourth steps, i.e. duplication of the gene and recombination between the two loci, are highly probable, as both selection pressure is active in this direction and this happens in a situation where the mutated allele is present in the population in reasonable frequency, maintained by selection in favor of heterozygotes.

Was this information useful for you?
The classical Darwinian theory of evolution can explain the evolution of adaptive traits only in asexual organisms. The frozen plasticity theory is much more general: It can also explain the origin and evolution of adaptive traits in both asexual and sexual organisms Read more
‹ XI.3 Extra copies of genes usually originate from gene or genome duplication up XI.5 New genes can originate from interspecific (horizontal) gene transmission ›
Draft translation from: Evoluční biologie, 2. vydání (Evolutionary biology, 2nd edition), J. Flegr, Academia Prague 2009. The translation was not done by biologist, therefore any suggestion concerning proper scientific terminology and language usage are highly welcomed. You can send your comments to flegr