The cell cycle is an aggregate of processes through which two or more daughter cells are formed from one parent cell.Temporally, this is delimited as the interval from the instant of commencing one cell division to the commencement of the next cell division.In unicellular, asexually reproducing organisms, the cell cycle is identical with the life cycle, while, in sexually reproducing organisms and multicellular organisms, the life cycle is more complicated and includes more or even a great many cell cycles.Duplication of DNA in a process of replication is a fundamental event in the cell cycle.DNA replication can occur (and in prokaryotes fundamentally occurs) simultaneously with cell growth.After a certain limiting size is attained, the cell divides into two or more parts, each of which takes part of the genetic material with it.Under these conditions, however, there is a danger that cell division will occur prematurely, i.e. at the time prior to completion of DNA replication.In this case, one of the daughter cells would bear incomplete genetic information and it or its progeny would be destined for death following dilution or consumption of the molecules that it would not be able to synthesize anew as a consequence of the absent genetic information.It can be assumed that, in the initial stages of evolution, cell division could occur through a quite primitive mechanism and thus division of the genetic information could still have been imperfect and irregular.Consequently, such a situation occurred relatively frequently.The efficiency of cell division was quite low and the average number of cells that were viable over a long time per cell division was probably much less than two (but obviously greater than one).

The most primitive mechanism reducing the risk of formation of cells with incomplete genetic information seems to consist in increasing the ploidy of the cell.If the genome is present in the cell in a great many copies then, even in random division of the genetic material between two daughter cells, it will be highly probable that both products of the cell division, i.e. both daughter cells, will be viable.However, in actual fact, this mechanism is not effective in the long run.Loss mutations must necessarily gradually accumulate in the individual copies of the genome; the cell is not capable of controlling which copies of the particular genes are functional and which are not and thus, after a certain time, while the probability that one entire copy of the genome will be transferred to both daughter cells remains high, the probability of transferring one entire functional copy decreases to zero.A further complication lies in the fact that, on random segregation of the genetic material, there is a gradual increase in the population in the fraction of cells with constantly increasing DNA content in the nucleus.Cells with reduced DNA content in the nucleus would most probably not be fully functional (viable) and thus would sooner or later be eliminated by natural selection.For both of these reasons, it follows that a simple increase in the ploidy is not sufficient for ensuring transfer of complete genetic information to the daughter cells and the cell must have specific mechanisms created for this purpose.

One of the mechanisms that effectively assist in regular distribution of the genetic information to the daughter cells consists in joining of the individual replicators, DNA molecules corresponding to the individual genes, into larger structural units, i.e. the formation of primitive chromosomes.If the daughter cell takes away a copy of one chromosome, it will be automatically ensured that it will have a copy of all the genes contained in this chromosome.In typical modern prokaryotic organisms, most genes are concentrated on a single chromosome.The independent plasmids bear only the “luxury” genes that are not essential for the life of the organism under normal conditions, or genes that the particular species gained (e.g. through interspecies transmission) only recently and whose usefulness has not yet been tested by natural selection (Campbell 1981; Amabile-Cuevas & Chicurel 1992).In eukaryotic organisms, the genome is usually separated into several, frequently a great many chromosomes.Sometimes it is assumed that a greater number of chromosomes are connected with the greater genetic complexity of eukaryotic organisms and difficulties associated with managing such a large amount of DNA within one continuous molecule.The fact that the length of chromosomes in various species can differ dramatically in various species and also in the genome of a single species, however, indicates that the reasons for separation of cellular DNA into a greater number of chromosomes will probably be different.This could consist in evolutionary adaptation permitting the generation of genetically different progeny during sexual reproduction, by mixing together the chromosomes derived from two different parent organisms.Through differences in the numbers of chromosomes in the karyotypes of the individual species, evolution could regulate the intensity of this mixing and thus the degree of intraspecies variability and subsequently also the microevolutionary plasticity of the individual species in dependence on the variability and heterogeneity of their environment.

The condition for actual long-term functioning of mechanisms ensuring regular distribution of genetic information amongst daughter cells consists in commencement of cell division only when all the genetic information has been fully reproduced and also provision is made for even distribution of complete copies of the genome amongst daughter cells.Periodic alternation of phases in which cell division is prohibited and phases in which, to the contrary, cell division is permitted, forms the basis for a regular eukaryotic cell cycle (Fig. XII.1).In the typical case, four basic phases alternate in this cycle, i.e. phase 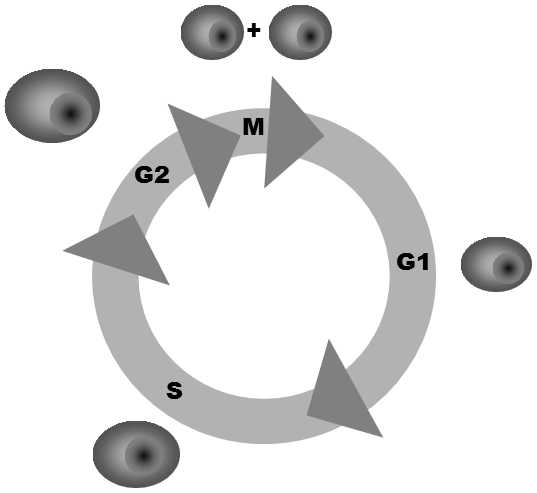 G1, in which the genome is present most frequently in the cell (i.e. in diploid cells) in 2 copies, phase S, in which DNA replication occurs, phase G2, in which the genome is most frequently present in the cell in 4 copies, and phase M, during which the nucleus and then, usually immediately, the whole cell divide.The length of the phases differs substantially; some phases (G1 and G2) can have zero length in practice, so that the cell will commence nuclear and then cell division immediately after completing DNA replication or enter phase S immediately after the cell division.In some organisms, the nuclear division cycle need not occur simultaneously with the cell division cycle.

The cycle of alternation of haploid and diploid phases apparently occurs in all eukaryotic organisms to a great degree independently of this basic cycle; its existence is closely connected with the almost universal occurrence of sexual reproduction (in the sense of amphimixis) in eukaryotes.During amphimixis, it is apparently advantageous or even necessary to reduce the number of copies of the genome in the sex cells to one, possibly so as to a prior reduce intra-gamete competition of alleles of a single gene originally derived from different parents.At a certain stage in sexual reproduction, fusion, i.e. syngamy, occurs of two sex cells bearing a single copy of the genome, i.e. two haploid gametes.The newly formed zygote is then necessarily diploid and, prior to entering the normal asexual cell cycle, can either renew its haploid state and further cyclically alternate between the haploid (in the G1-phase) and diploid (in the G2-phase) states, or can remain diploid and alternate between the diploid state (in the G1-phase) and the tetraploid state (in the G2-phase) for the time of its sexual reproduction.It is necessary to state that the ploidy of the cells is even greater in a great many differentiated tissues of multicellular organisms.

Was this information useful for you?
The classical Darwinian theory of evolution can explain the evolution of adaptive traits only in asexual organisms. The frozen plasticity theory is much more general: It can also explain the origin and evolution of adaptive traits in both asexual and sexual organisms Read more
‹ XII EVOLUTION OF ONTOGENESIS AND THE LIFECYCLE up XII.1.1 Cells in the haploid and diploid phases of their life cycle differ in terms of function; there may be a link to the differences in the roles of the haploid and diploid phases in the life cycle of the particular species ›
Draft translation from: Evoluční biologie, 2. vydání (Evolutionary biology, 2nd edition), J. Flegr, Academia Prague 2009. The translation was not done by biologist, therefore any suggestion concerning proper scientific terminology and language usage are highly welcomed. You can send your comments to flegr