XII.3 Restoring diploid status through the fusion of two haploid cells, today mostly associated with the process of sexual reproduction, can facilitate repairing of DNA damage and some types of mutations

We do not yet know the reasons for the emergence of amphimixis.In contemporary eukaryotic organisms, syngamy occurs during sexual reproduction in the vast majority of cases.In the past, this need not have been necessary; the exchange of genetic information or its transfer from one individual to another one need not have been associated with reproduction at all and could have emerged in connection with completely different processes.One of the functions of amphimixis could be repair of damaged DNA or repair of mutations (Long & Michod 1995; Bernstein 1979; Bernstein et al. 1985).The fusion of two foreign haploid cells facilitates the repair of damaged sites in the DNA molecule.Much of this damage (e.g. breakages, nucleotide depurination, formation of dimers of bases), in cases where both complementary chains in the given DNA section are not affected, can be repaired even within the haploid cell, but in some cases only at the price of formation of a mutation.For example, replacement of a depurinated nucleotide by an intact nucleotide at damaged sites can renew the physical and chemical integrity of the DNA but, because the reparation apparatus inserts new nucleotides in place of the damaged nucleotides frequently quite at random, sections are formed in the DNA molecule where some nucleotides do not pair together.If this section is located in the genome of a haploid cell, it is not possible to determine which nucleotides in the given site were the original ones and mutations are formed in the cell in subsequent repair of unpairing sections or subsequent replication.Similar difficulties occur if these sections occur in a diploid cell in which diploidization occurred through replication of already damaged DNA.In this case, the presence of mutations will no longer be indicated by the occurrence of noncomplementary bases; however, prior to replication, sections with originally nonpairing bases could be labeled as suspicious for the future by a chemical label, e.g. methylation (Foster 1999).If a similar process occurs in a diploid cell formed by fusion of two haploid cells, homologous DNA molecules will be damaged in the majority of cases in different places so that it will be possible to renew the structure of the damaged DNA or DNA labeled as suspicious of the occurrence of a mutation according to the sequence of nucleotides of the corresponding site of the other, undamaged copy of the given area (Fig. XII.2). 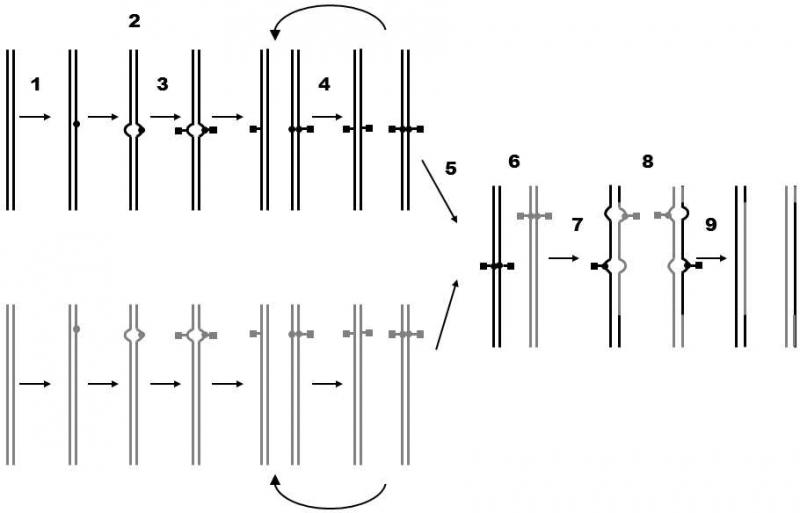 A number of indirect indications confirm the key importance of amphimixis and other processes currently connected with sexual reproduction in DNA reparation.For example, it was found that the intensity of recombination, specifically the number of crossing-overs, is positively correlated in the cell with the degree of damage to the DNA by a physical or chemical mutagen.

For organisms with low genetic complexity, i.e. for example, for organisms that occurred in the initial stages of evolution, the existence of similar mechanisms for the repair of damaged sites was apparently not of vital importance.A small genome can be permanently maintained in functional condition even by the simple action of negative selection, i.e. death of the individual with the damaged genome.However, from a certain genome size, the mutation load in the population or species, i.e. the number of genetic deaths required to eliminate individuals with damaged genomes, would be so high that it would exceed the reproduction potential of the population and the population or even the species would die out (Ridley 2000).From this genome size, amphimixis apparently became an essential part of the life cycle of the particular species, although it need not necessarily be part of every cell cycle.

Was this information useful for you?
The classical Darwinian theory of evolution can explain the evolution of adaptive traits only in asexual organisms. The frozen plasticity theory is much more general: It can also explain the origin and evolution of adaptive traits in both asexual and sexual organisms Read more
‹ XII.2 Diploid genome status can be restored not only by DNA replication but also by the fusion of two haploid cells up XII.4 Amphimixis created the conditions for the proliferation of ultraselfish genes and caused the transition from Darwinian to Dawkinsian evolution ›
Draft translation from: Evoluční biologie, 2. vydání (Evolutionary biology, 2nd edition), J. Flegr, Academia Prague 2009. The translation was not done by biologist, therefore any suggestion concerning proper scientific terminology and language usage are highly welcomed. You can send your comments to flegr