XII.7.3 Involvement of epigenetic processes in ontogenesis results in repetition and, in some cases, to the contrary, skipping over of evolutionarily older developmental stages during ontogenesis, and to the persistence of some rudimentary organs in adults

Some epigenetic processes are evolutionarily very old and occur in phylogenetically quite distant groups of organisms.Through the effect of anagenesis undergone by the given species, the phenotype of the relevant adults can differ drastically; nonetheless, very similar or even identical epigenetic processes can occur in them during ontogenesis.One of the consequences of this fact is that organs or their basis can develop in the embryo during ontogenesis, which were present in the phylogenetic ancestor of the particular species, but are no longer present in the body structure of modern organisms or are present only in the form of rudimentary organs (Fig. XII.9, XXVII.5).These 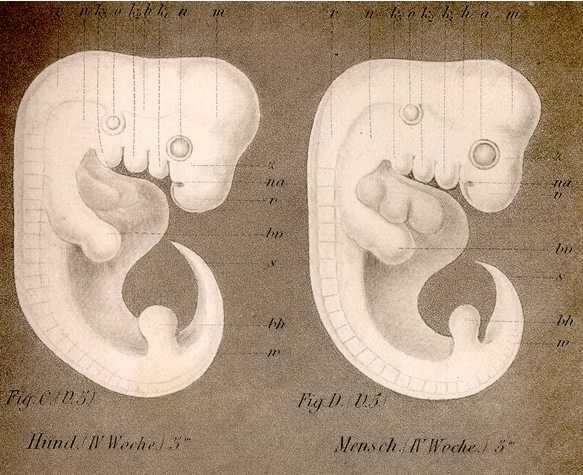 Fig. XII.9 The similarity of vertebrate embryos. The original Haeckel drawings of the embryos of a dog (on the left) and a human being (on the right) show the similarity between the early embryos of various species of vertebrates. The presence of a tail is apparent on the human embryo, where this is not present under normal conditions in later phases of development and, of course, in individuals after birth.  According to Haeckel (1879).

organs have thus lost their importance for the functioning of the adult organism, but can frequently be of irreplaceable importance for the functioning of epigenetic processes that control the formation of other organs during ontogenesis.This fact led to the formulation of Haeckel’s recapitulation theory.This theory, also called the recapitulation rule or biogenetic law, basically states that ontogenesis is repeated phylogenesis (see also XXIII.6.1).In this inadmissibly simplified form, this rule is, of course, not valid because the appearance of individual stages of the developing embryo can certainly not tell us anything about the appearance of the sequence of phylogenetic forebears of the particular species.On the other hand, information on the developmental stages of the embryo can certainly provide us with very important information on the phylogenesis of a certain taxonomic group.If the foundations of a certain organ are present in the embryo at some stage of development, it can be assumed with absolute certainty that this organ was actually present in a phylogenetic ancestor of the studied species.The opposite is, of course, not true.An organ that was present in phylogenetic ancestors and did not have any function in epigenetic developmental processes or its function was somehow replaced during evolution need not be formed at all during the ontogenesis of its progeny.Similarly, the order in time of establishment of the individual organs in embryogenesis need not exactly correspond to the order of formation of these organs during phylogenesis.If the individual epigenetic processes in which the foundations of certain organs play a role are functionally mutually unrelated, the order of formation of the individual organs can be different from the order in which they were formed in phylogenesis.

The body structure of an adult organism thus contains rudiments of organs that do not have any functional importance for the given species.The reason for the evolutionary survival of these rudiments could be their irreplaceable role in some epigenetic process functioning in the ontogenesis of the particular species.However, in some cases, the reasons for the existence of rudiments can be quite different; a role can be played here, for example, by the fact that the particular rudiment does not benefit its carrier, but also does not harm it and insufficient  mutations have been accumulated by genetic drift to prevent its formation during ontogenesis.It will apparently also frequently occur that the particular rudiment does not fulfill the main function for which it emerged in evolution, but performs some auxiliary function that it began to fulfill only secondarily some time in evolutionary history.Digestion of food does not occur in the appendix of humans as in ruminants; however, the microflora of the appendix are apparently important for the synthesis of some vitamins.

Was this information useful for you?
The classical Darwinian theory of evolution can explain the evolution of adaptive traits only in asexual organisms. The frozen plasticity theory is much more general: It can also explain the origin and evolution of adaptive traits in both asexual and sexual organisms Read more
‹ XII.7.2 Epigenetic processes are a natural source of genetic and environmental canalization up XII.7.3.1 The embryogenetic stage, in which the members of the same animal phylum resemble each other most, is called the phylotypic stage; earlier and later stages in various species of the same phylum can differ substantially ›
Draft translation from: Evoluční biologie, 2. vydání (Evolutionary biology, 2nd edition), J. Flegr, Academia Prague 2009. The translation was not done by biologist, therefore any suggestion concerning proper scientific terminology and language usage are highly welcomed. You can send your comments to flegr