XIV.2.2 Morphological anisogamy may be a defence against the proliferation of cytoplasmic ultraselfish genes

The fact that the microgamete generally does not contribute its cytoplasm to the future zygote constitutes a very important difference between macrogametes and microgametes. The fact that, during gametogenesis or during the fusion of the microgamete with the macrogamete, however at the latest following formation of the zygote, cellular organelles containing their own genome, i.e. plastids and mitochondria, derived from the paternal (however, in some taxons, from the maternal) line are usually eliminated (Birky 1995).Some evolutionary biologists are of the opinion that the necessity of eliminating extranuclear genetic elements is the main reason for formation of microgametes (Hurst & Hamilton 1992).

It has been known for a very long time that extranuclear genes substantially affect the properties of a great many cells. It is, at the very least, striking that this effect very frequently does not bring the cells or organisms any adaptation advantage and is useful only for the carrier of a certain extranuclear genetic element at the expense of individuals that do not carry the given element.In a great many cases, the coding of the properties provides an advantage only for the actual element or for the organelle and is detrimental for its cell.

Killer-factorsin yeasts are a well-known, but not very typical, example because of their potential importance in interspecies competition. These are cytomplasmic genetic elements that encode a toxin killing yeast cells and simultaneously encodes the protein that provides the cell in which it is synthesized with resistance against the action of that toxin (Polonelli & Morace 1986; Boone et al. 1986).The killer-factor spreads rapidly in a population of yeasts.Yeasts that do not have it are rapidly killed when a yeast that contains this factor comes into their vicinity.The presence of the killer-factor is otherwise in no way useful to the yeast (outside of the area of intraspecies or interspecies competition).To the contrary, the necessity of synthesizing a large amount of extranuclear nucleic acid, envelope proteins (most  killer factor species have their nucleic acid protected by a special capsid) and finally also the toxin and resistance factor represent a substantial energy load for the cell.Factors causing male sterilityin fruit flies and pollen sterility in some plants are similar examples that also spread in the population without bringing their hosts any advantage (Rieseberg 1994).

The reason for this special behavior of extranuclear genetic elements is now clear.A competitive battle is constantly occurring in any genome between the various alleles of the individual genes.If these are nuclear genes, the individual alleles do not have much choice of strategy that they can elect in competition.With a few exceptions, most alleles can spread in the population only when they are capable of affecting the properties of their carriers so as to provide them with a selection advantage over the other members of the population.There are only a very few nuclear genes that have gained the ability in evolution to “cheat” the fair system of even distribution of genes derived from both parents during nuclear division (see Chap. VI).These genes are capable, for example, of causing gene conversion, overwriting a copy of the gene located on a homologue chromosome according to their own sequence.Another possibility is to destroy the homologue (to be more exact, homeological) chromosome derived from the other parent and cause that the organism be capable of producing viable germ cells with a certain chromosome derived only from one of the parents.The organism thus has reduced fertility, half of the gametes it produces are not viable, but the aggressive gene is contained in all the viable gametes and thus in all the progeny of the particular individual.For example t-alleles spread in the population of domestic mice in this way (Vanboven et al. 1996).s

A different situation occurs if the gene is encoded on an extra-nuclear element, for example in the mitochondrial DNA.Under these conditions, during sexual reproduction through fusion of two full-value cells, any gene would be capable of spreading very rapidly in the population.Thus, it would be exposed to a strong selection pressure to “disobey the law”, in this case the law of “fair” distribution of the genetic material derived from the father and from the mother during meiosis and thus become an outlaw gene.For example, the gene can “learn” to somehow destroy its competitors, copies of the same gene on other genetic elements.Our contemporary knowledge indicates that extranuclear outlaw genes greatly complicate the functioning of unicellular sexually reproducing organisms.Various types of outlaw genes are formed in mitochondria and other genetic material containing elements that carry on a relentless struggle against one another, with detrimental consequences for the cells of this unicellular organism.

The formation of microgametes is a very effective mechanism for stopping the spreading of outlaw genes located on extranuclear genetic elements.The fact that the microgamete transfers only nuclear material into the zygote, that it does not bring cytoplasmatic elements or subsequently destroys these elements, substantially reduces the possibility of the negative effect of outlaw genes derived from both parents within the zygote (Fig. XIV.2). 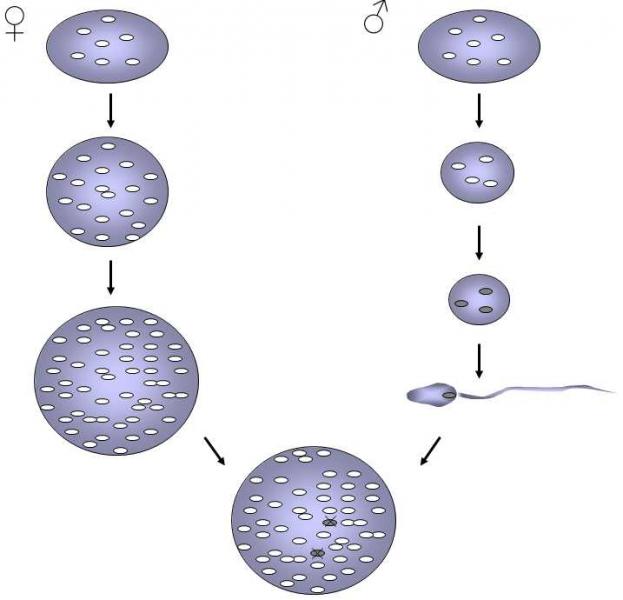 Was this information useful for you?
The classical Darwinian theory of evolution can explain the evolution of adaptive traits only in asexual organisms. The frozen plasticity theory is much more general: It can also explain the origin and evolution of adaptive traits in both asexual and sexual organisms Read more
‹ XIV.2.1 Morphological anisogamy may be the outcome of the simultaneous effect of two antagonistic selection pressures up XIV.3 Multicellular organisms exhibit a cycle of alternating gamete and multicellular organism stages; natural selection can operate both among gametes and among multicellular individuals ›
Draft translation from: Evoluční biologie, 2. vydání (Evolutionary biology, 2nd edition), J. Flegr, Academia Prague 2009. The translation was not done by biologist, therefore any suggestion concerning proper scientific terminology and language usage are highly welcomed. You can send your comments to flegr