XIV.8.1.5.1 Promiscuity can also be a consequence of the influence of a sexually-transmitted parasite on its host’s behaviour

Female (and male) promiscuity is, however, sometimes explained in an entirely different way.This need not in any way be behavior advantageous for its bearer, the promiscuous female, but may consist in behavior controlled by a parasite and advantageous only for this parasite.

Control of the behavior of a host by a parasiteis apparently a very common phenomenon (see XIX.6.5).There are a great many parasites whose transmission from one host to another occurs at the moment of copulation or during behavior directly or indirectly connected with reproduction of the host species.Promiscuity could provide certain advantages for the host species; however, for the sexually transmitted parasite, it is the most important parameter influencing the effectiveness of its spreading in the population, thus a question of life and death.If a mutation occurs in a parasite that allows it to affect the nervous system of the host organism in a way so that it will behave in a more promiscuous manner, this will greatly increase the chance for the parasite that it will spread in the population horizontally from one individual to another. It is understandable that such a mutant very rapidly predominates in a population of parasites.A parasite can achieve the required result in various ways, either by direct intervention in the nervous system of the host or through its endocrine system, through production of suitable hormones or their analogues, or very indirectly, for example in that it causes itchiness of the sexual organs of its host (Dawkins 1976). 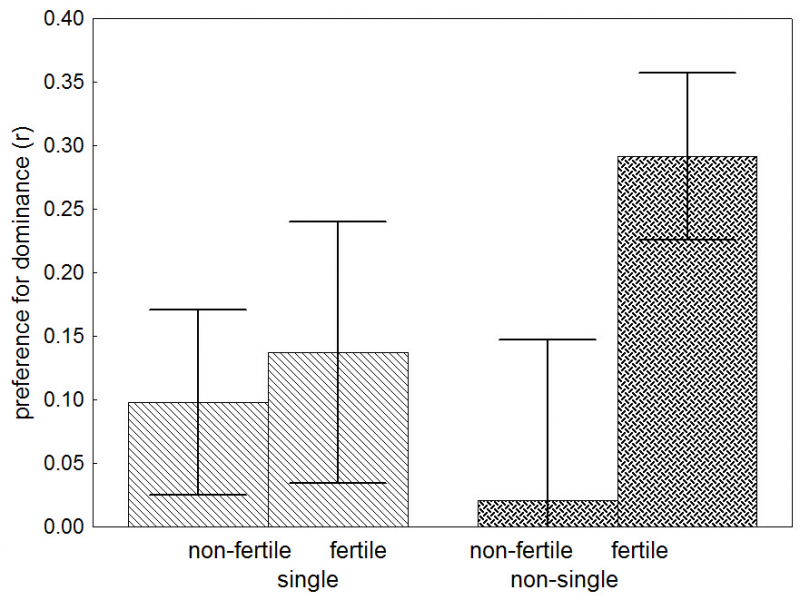 Fig. XIV.13 Preference for smell of dominant men. The attractiveness of smell of body odour samples of 48 male students was  rated by single or partnered women (65 female students) in the fertile and non-fertile phases of their cycle. The high if the columns indicates the mean coefficient of correlation between dominance and attractiveness of smell of men. In accordance with the theory of mixed mating strategies, preference for dominant men (for good genes) varies with relationship status, being much stronger in fertile women in stable relationships than in fertile single women.According to Havlíček et al.  (2005).

The parasite need not be transmitted during the actual copulation.It is, at the very least, suspicious how frequently the mouths come into contact as part of the precopulation behavior of various species (mutual feeding, licking, kissing).In general, it can be stated that we kiss one another because it is pleasant.This undoubted fact is, however, uninteresting from an evolutionary standpoint.What requires an explanation is who and why programmed our nervous system so that kissing is pleasant.One of the surprising answers could be – a parasite.

Was this information useful for you?
The classical Darwinian theory of evolution can explain the evolution of adaptive traits only in asexual organisms. The frozen plasticity theory is much more general: It can also explain the origin and evolution of adaptive traits in both asexual and sexual organisms Read more
‹ XIV.8.1.5 Under certain circumstances, sexual promiscuity can be a strategy benefiting both males and females up XIV.8.2 Haplodiploid organisms exhibit extreme cases of intersexual conflicts ›
Draft translation from: Evoluční biologie, 2. vydání (Evolutionary biology, 2nd edition), J. Flegr, Academia Prague 2009. The translation was not done by biologist, therefore any suggestion concerning proper scientific terminology and language usage are highly welcomed. You can send your comments to flegr