XVI.1 Behavior may easily and repeatedly change during an individual’s life; the resulting plasticity of behavior enables adaptation of the phenotype to a changeable environment

The environment of organisms is more or less heterogeneous in time and space. In one particular place, it periodically or irregularly changes itself, mostly much faster than the individual species would be able to adapt to these changes through natural selection. Therefore, in many species, specific mechanisms have appeared that, to some extent, enable the phenotype to adapt according to the actual environmental conditions during an individual’s lifetime. In response to the available resources, unicellular organisms can activate gene systems, the products of which provide for processing of a particular nutrient or its transport to the cells; plants often very sensibly adapt their morphology, for example the size and shape of their root systems, or size, shape and number of leaves in accordance with the conditions of the particular location. Adaptive phenotype plasticity also occurs to some degree in animals. When threatened by predators, some species of daphnia produce tall crests on their heads to protect themselves from predation (Agrawal, Laforsch, & Tollrian 1999). Likewise, some carp fish species react to certain chemical signals indicating the presence of fish predators in the tank by increasing their body height, which may protect them from the predators (Brönmark & Miner 1992). Even humans have the ability to react to increased muscular stress by strengthening particular muscles and to an elevated supply of UV- rays by producing protective pigments in the skin. Many of the changes mentioned are reversible and a vast majority of them are restricted to the particular individual in which there were induced and do not affect its offspring. Considering that some of the factors invoking the particular phenotype changes remain in the environment longer than only one individual’s life-span, certain mechanisms have developed during evolution, allowing the transmission of the acquired phenotype modifications from one generation to the next (Agrawal, Laforsch, & Tollrian 1999)(see II.8.2). If the individuals in the successive generations no longer encounter the original signal, the appropriate phenotype modification gradually fades and the original phenotype is restored.

Behavior is the most easily modifiable compound of a phenotype. Typically, behavioral changes do not require physical changes; although some changes probably occur in the brain microanatomy. This means that the relevant phenotype changes may be immediate, easily reversible and relatively undemanding as far as energy exertion and other resources are concerned. Rebuilding the body, on the other hand, may represent a deep and long-term impact for the energetic balance of the organism. Of course, the abilities of individual organisms to adapt their behavior according to the actual state of the environment differ greatly.  Generally, the quantitative and qualitative potential for adaptation of behavior to the requirements of the environment are related (in evolution) to the development of the central neural system, the organ designated for behavior control. After eliminating the differences following from the evolutionary history of the studied taxons, e.g. when comparing development of the central neural system within pairs of sister taxons, the crucial factor consists in the character of the niche the particular species occupies in nature. Organisms living in quickly, acyclically and unpredictably changing surroundings exhibit greater behavioral plasticity than species living in a homogenous, stable environment. For many species, intraspecific relations are the most important factor in their environment; this factor is proportionately reflected in the development of the neural systems of the various species. Comparative studies mostly demonstrate that the development of the neural system, generally the development of the neocortex in mammals, correlates well with the extent of the social network of the given species. (Kudo & Dunbar 2001)(Fig. XVI.1). 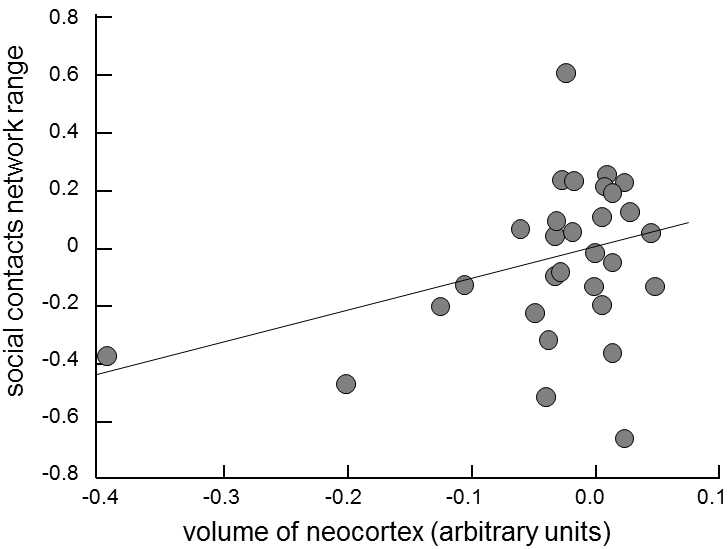 Was this information useful for you?
The classical Darwinian theory of evolution can explain the evolution of adaptive traits only in asexual organisms. The frozen plasticity theory is much more general: It can also explain the origin and evolution of adaptive traits in both asexual and sexual organisms Read more
‹ XVI EVOLUTION OF BEHAVIOR up XVI.2 During evolution, some taxons have developed mechanisms for behavior control that enable the individual to react to an environmental influence that the species has never experienced before ›
Draft translation from: Evoluční biologie, 2. vydání (Evolutionary biology, 2nd edition), J. Flegr, Academia Prague 2009. The translation was not done by biologist, therefore any suggestion concerning proper scientific terminology and language usage are highly welcomed. You can send your comments to flegr