XVI.3.1 Only phenotype changes that influence the effectiveness of behavioral patterns actually found in members of a species can be fixed by means of natural selection

Members of a species cannot develop fins before they have started to swim (leaving the exaptation phenomenon aside). At first sight, this principle may seem to contradict the   modern theory about the non-existence of directed (adaptive) mutations (see III.11), but it is necessary to keep in mind that the subject of a new mutation and the subject of a new phenotype trait are mostly two different phenomena. While a mutation arises in one-step process, the origin – or rather development – of a phenotype trait is usually a process taking many steps, requiring fixation of a number of mutations for its realization. Accomplishment of such a many-step process would not be possible unless the individual steps were secured by natural selection, i.e. if the bearers of the individual mutations contributing to the given trait before the formation of another useful (advantageous) mutation did not first predominate in the population in consequence of their heightened fitness. One isolated advantageous mutation can occur accidentally and, as the results of fluctuation tests show, in the vast majority of cases it actually occurs without any relation to the existence or non-existence of a relevant selection pressure. In any case, a chain of several consecutive mutations leading to the origin of a certain phenotype trait (e.g. a fin) can develop only if a particular selection pressure affects a population over a prolonged time (Fig. XVI.3). 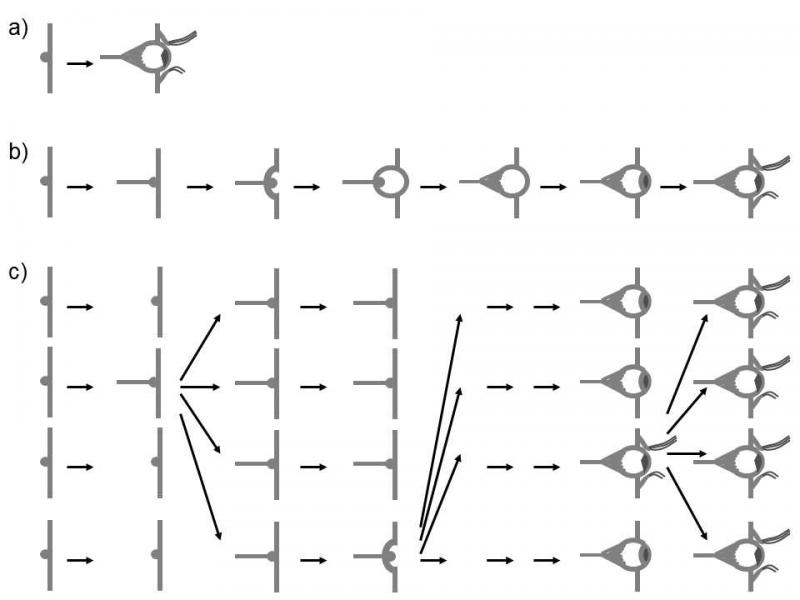 Fig. XVI.3 Complex organ evolution. The diagram shows three alternatives of evolution of a complex organ, the chamber eye in this case. The first alternative, chamber eye evolution in one step (a), is practically out of question, since it would require simultaneous occurrence of a number of evolutionary changes in one individual. The second alternative, i.e. gradual evolution of the complex organ via accumulation of individual evolutionary changes without the involvement of selection (b), is also rather implausible. Individuals carrying the previous mutation would be quite rare in the population and it is therefore much more likely that their offspring would die out as a result of genetic drift without breeding even before it would have acquired the next necessary mutation. On the contrary, the third alternative, i.e. gradual accumulation of useful partial mutations with the involvement of selection, which spreads the evolutionary change to all the individuals in the population in each step (c), represents a highly efficient mechanism capable of producing even the most complex organs in a relatively short time.

This shows that adaptive learned behavior in animals can be of great importance in biological evolution. When a population creates a new adaptive behavioral pattern, e.g. when the members of a certain bird species learn to feed on shelled snails instead of seeds, the genetic fixation of the pattern that was formerly transmitted by imitating and learning is only a question of time. It is also only a matter of time before it becomes more effective through accumulation of the appropriate morphological and physiological changes in the phenotype of the members of the populationby means of natural selection.

Was this information useful for you?
The classical Darwinian theory of evolution can explain the evolution of adaptive traits only in asexual organisms. The frozen plasticity theory is much more general: It can also explain the origin and evolution of adaptive traits in both asexual and sexual organisms Read more
‹ XVI.3 The Lamarckian model of evolution assumed that changes in the behavior of animals precedes changes in their phenotype up XVI.3.2 Learned behavior may accelerate the adaptive evolution due to the Baldwin effect and genetic assimilation ›
Draft translation from: Evoluční biologie, 2. vydání (Evolutionary biology, 2nd edition), J. Flegr, Academia Prague 2009. The translation was not done by biologist, therefore any suggestion concerning proper scientific terminology and language usage are highly welcomed. You can send your comments to flegr