XVI.5.4 In the real world, where the players sometimes make mistakes, the Tit for Tat strategy is not the optimal one; other strategies win

Organisms live in the real world, not in the world of idealized models. One of the basic differences between models and reality is the fact that the real world is always more or less unpredictable (stochastic) and errors happen there with a certain probability. An individual can, by mistake or accidentally, betray its opponent or, to the contrary, cooperate in error, or its behavior can be misinterpreted in the same way by the opponent. In the real world, Tit for Tat is not an optimal strategy and can be forced out of the population by other strategies. An example of a strategy that is more successful in the unpredictable real world is “Generous Tit for Tat”, sometimes also called “Firm but Fair” (Nowak & Sigmund 1992). This strategy forgives sporadic betrayal with a certain probability (30 %), i.e. it responds by cooperation in the next round of the game. If two bearers of the Tit for Tat strategy play against one another and one of them betrays by mistake, it launches a long series of mutual punishment and both opponents fail to profit. On the contrary, if this situation occurs for two bearers of the Generous Tit for Tat strategy or one Generous Tit for Tat bearer and one Tit for Tat bearer, the mutual punishment series will be terminated quickly as soon as the Generous Tit for Tat bearer responds to the betrayal by cooperation in the next round.

From the viewpoint of game theory, even the Generous Tit for Tat strategy is not an evolutionarily stable strategy in the stochastic world, because its temporary success enables the always cooperate strategy to spread and this allows the successful return of thealways betray strategy. So the game does not have a stable solution, and the representation of individual strategies in the population circulates constantly. It seems so far that the only evolutionarily stable strategies are those that do not direct their behavior according to the opponent’s behavior in the last round, but according to how they behaved in the last round and what profit they got from it. A fairly successful, even though not evolutionarily stable strategy of this kind is a strategy named Pavlov (Nowak & Sigmund 1993). It is directed by a simple rule: repeat your behavior from the last round, if it was successful (i.e. you betrayed and the opponent cooperated or you both cooperated), change your behavior if you lost in the last round (i.e. you cooperated and your opponent betrayed or you both betrayed).  The Pavlov strategy, similar to the Generous Tit for Tat, does not allow the always cooperate strategy to spread in the somewhat unpredictable world, but it enables the always betray strategy to spread. Existing results show that even the simplest so-far described evolutionarily stable theories have to be capable of learning, i.e. they must have memory and the ability to remember the results of a number of previous rounds when choosing a strategy for a new round (Wakano & Yamamura 2001). Experiments performed using experimental games with human volunteers have shown that, actually, in a normal population, people mainly follow strategies similar to the Generous Tit for Tat as well as the Pavlov strategy (Fig. XVI.6). At the same time, it has been shown that the actually used strategies were somewhat complicated and also more successful than the Generous Tit for Tat or Pavlov and that the players used information from a number of previous rounds in the strategies (Wedekind & Milinski 1996). 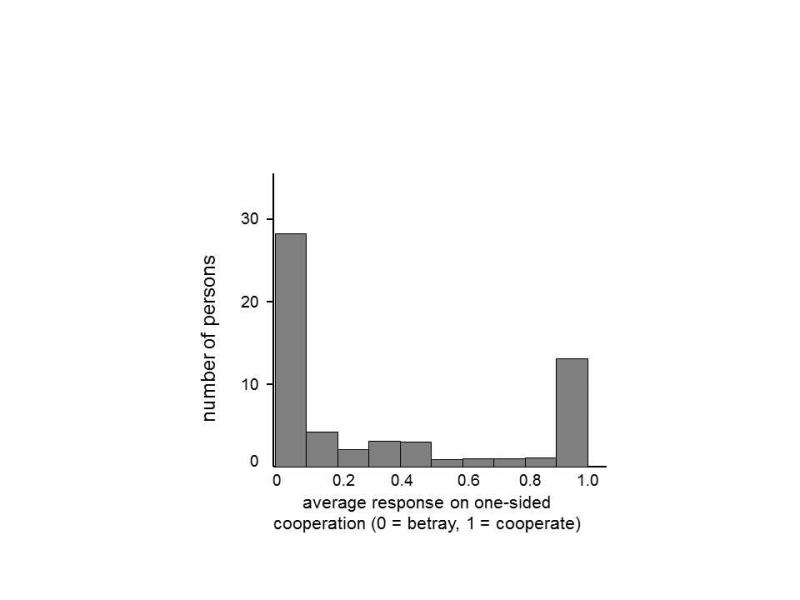 Fig. XVI.6 Incidence of strategies similar to the generous tit-for-tat and Pavlov strategies in a student sample. First year biology students from the University of Bern (N = 58) repeatedly played the prisoner’s dilemma game for money. They were not familiar with the theory of the experimental game. In a situation where, in a certain round, one player betrayed while his opponent cooperated, a large group of students almost always cooperated in the next round, opting for the generous tit-for-tat strategy, while another, approximately twofold, group of students almost always betrayed, opting for the Pavlov strategy (see side bars of the histogram). Even in the three other possible situations (i.e. bilateral cooperation, bilateral betrayal, unilateral betrayal by the opponent in the previous round), the behavior of members of both groups was almost always in accordance with the relevant strategies. The results of theoretical analyses show that generous tit-for-tat is more advantageous in a situation where the two players alternate in each round as to who is the first to reveal his choice, while Pavlov is more useful when both players reveal their choice at the same time. Yet, during the experiment, the players did not change their favorite strategy and, in each variant of the game, adhered to either generous tit-for-tat or Pavlov. After Wedekind and Milinsky (1996).

Was this information useful for you?
The classical Darwinian theory of evolution can explain the evolution of adaptive traits only in asexual organisms. The frozen plasticity theory is much more general: It can also explain the origin and evolution of adaptive traits in both asexual and sexual organisms Read more
‹ XVI.5.3 In evolution, the fact that the same individuals can interact repeatedly during their lifetimes under similar conditions is of essential importance up XVI.6 When choosing their behavior, organisms do not go by the sum of expense and profit, expressed in units of fitness, but by a similar sum of negative and positive emotions ›
Draft translation from: Evoluční biologie, 2. vydání (Evolutionary biology, 2nd edition), J. Flegr, Academia Prague 2009. The translation was not done by biologist, therefore any suggestion concerning proper scientific terminology and language usage are highly welcomed. You can send your comments to flegr