XVII.3 Memes can spread much more efficiently in the population than genes

If we ignore the modern ability of humans to sequence and synthesize genes and the possibility of natural, but, in multicellular organisms, relatively rare horizontal transmission of genes, genes can be transmitted under natural conditions only during reproduction.In contrast, memes can be transmitted in various forms and through various pathways.The most important difference in the spreading of genes and memes is apparently that a meme can be transmitted, not only vertically, from parents to offspring, but also horizontally, within a population between related and completely unrelated individuals.In fact, the spreading of a successful meme need not even respect the borderlines between biological species, as the members of one species can imitate the behavior of some other species.For example, 10 various species of birds gradually learned how to open milk bottles from tits.It has been confirmed in experiments that dogs are capable of obtaining useful information by observing the behavior of humans (Fig. XVII.5).Thus, spreading of memes is far more effective than spreading of 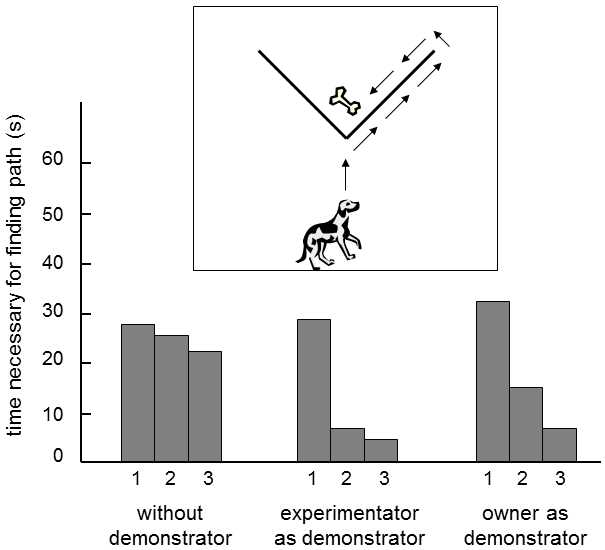 Fig. XVII.5 Learning the behavior of a different species of animal by imitation. Dogs were given the task of finding the fastest route to their favorite object placed around the corner of a wire fence 1 metre tall (see the illustration). Each dog had three tries (columns 1, 2 and 3), where the average time that the dog required to solve this problem was monitored in each of them. Three groups of dogs were studied: dogs that had to solve this task without help, dogs that were shown the route around the fence by the experimenter after the first successful attempt, and dogs that were shown the route by their owner after the first successful attempt. It is apparent from the graph that the possibility of following the path of a human around the fence to the object and back greatly assisted the dogs to rapidly solve the task. According to Pongrácz et al. (2001).

genes.As a new allele of a certain gene can become fixed in the population only in that the carriers of other alleles will transmit their alleles to their progeny with lower effectiveness than the carriers of the new alleles so that, after a certain, frequently quite large number of generations, they become extinct, a new, useful variant of a meme can very easily spread at the expense of other variants of the relevant meme in the entire population during the lifetime of a single generation.

Was this information useful for you?
The classical Darwinian theory of evolution can explain the evolution of adaptive traits only in asexual organisms. The frozen plasticity theory is much more general: It can also explain the origin and evolution of adaptive traits in both asexual and sexual organisms Read more
‹ XVII.2.2 Emergence of symbolic speech created the conditions for the participation of memetic drive in cultural evolution up XVII.3.1 New memes can emerge both randomly and in a targetted way, which means that cultural evolution can also employ Lamarckian mechanisms ›
Draft translation from: Evoluční biologie, 2. vydání (Evolutionary biology, 2nd edition), J. Flegr, Academia Prague 2009. The translation was not done by biologist, therefore any suggestion concerning proper scientific terminology and language usage are highly welcomed. You can send your comments to flegr