The individual variants of genes (alleles) compete together in biological evolution as to which will be successfully transmitted to further generations.In cultural evolution, the individual meme variants compete similarly.However, in this case, the competition is not limited only to transmission to the next generation, but also includes effective spreading within a single generation.The meme that is copied (imitated) most often by the members of the population or the members of other species will be most successful.There are various reasons why some memes are imitated more frequently than other memes.Frequently, those memes that are advantageous for their host, bring it some benefit, are copied.However, this is far from being the only reason.Some memes spread because they are easier to copy than other memes, and others because their carriers frequently have a dominant position in the group and the behavior of dominant individuals is usually preferentially copied (Benskin et al. 2002)(Fig. XVII.6).Some memes preferentially spread because they enforce their spreading by some 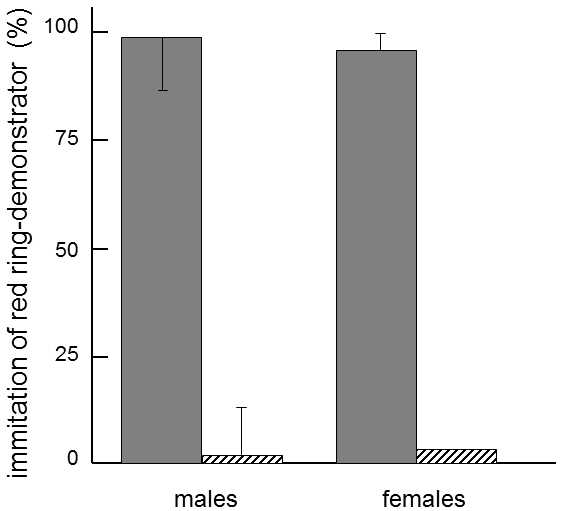 Fig. XVII.6 Preferential imitations of higher-ranking individuals in zebra finch.  In the experiment, first the male or female of zebra finch (Taeniopygia guttata) could observe from their cage how a pair of zebra finch males (demonstrators), one of which had green and one red rings on its legs, obtained food from a black and white feeding box. Each male had feeding boxes of both colors; however, one of them had a closed hole so that the male could actually obtain grain from only one of them. In the subsequent phase of the experiment, the zebra finches (observers) could choose a white or black feeding box themselves. It was found that they almost always preferred feeding boxes of the same color as that from which the male with the red rings originally fed (grey column), while they practically ignored the feeding box from which the male with the green rings obtained food (hatched column). The graph depicts the medians of the 3 experiments and also the interquartile range. The authors assume that the greater “authority” of the males with the red rings follows from the fact that a red beak in zebra finch is an indication of good state of health and thus a high position of the individual in the social hierarchy. According to Benskin et al. (2002).

specific mechanisms.For example, the meme for destruction of heathens, either through physical liquidation or conversion to the faith will probably spread faster than the meme for religious tolerance.Analogously, the meme prohibiting the believers of some religions to use contraception will also be successful (Kirk et al. 2001).In the latter case, the effectiveness of the spreading of the particular religion is ensured by cooperation between memes and genes.The carriers of the relevant meme have more children than the carrier of other memes and these children will, with great probability, also inherit the relevant meme from their parents.s

Was this information useful for you?
The classical Darwinian theory of evolution can explain the evolution of adaptive traits only in asexual organisms. The frozen plasticity theory is much more general: It can also explain the origin and evolution of adaptive traits in both asexual and sexual organisms Read more
‹ XVII.3.1 New memes can emerge both randomly and in a targetted way, which means that cultural evolution can also employ Lamarckian mechanisms up XVII.4.1 The spreading of memes with exclusively vertical transmission, i.e. parent to offspring, can be accompanied by the spreading of some genes, which may closely link cultural evolution with biological evolution ›
Draft translation from: Evoluční biologie, 2. vydání (Evolutionary biology, 2nd edition), J. Flegr, Academia Prague 2009. The translation was not done by biologist, therefore any suggestion concerning proper scientific terminology and language usage are highly welcomed. You can send your comments to flegr