XX.2.1 The nominalistic concept assumes that species do not objectively exist in nature and are only artificially delimited by humans – taxonomists

The nominalistic concept of species assumes that a natural property of all biological objects lies in their variability.Nominalists consider that only individuals and not taxons realistically exist.According to nominalists, the sharp boundary between species is basically artificial and, similar to higher taxons, is only a matter of convention.

If the discussion between nominalism and realism is limited to the aspect of the existence of an objective boundary between species at a single level in time, specifically at the present time, most of the available empirical data will tend to throw doubt on the nominalist concept.While the delimitation of the boundaries between individual colors in a spectrum is a matter of convention and various cultures have resolved this task with different results, when delimiting the boundaries between species living in a certain territory, mostly not only scientists working independently using different methodical approaches, but most scientists and nonscientists, i.e. representatives of pre-industrial ethnic groups living in the particular area, will tend to agree in terms of rough characteristics (Gould 1979).This is, of course, only an argument against cultural relativism and it can, in addition, be objected that both the scientist and the “savage” are members of the same species and have, for example the same sensory organs and the same architecture of their brain structure.It will probably not be possible to perform a real experiment any time in the near future; nonetheless, it seems highly probable that a sufficiently motivated Martians equipped with the corresponding Martian instrument (e.g. a DNA sequencer) would differentiate terrestrial organisms into a similar system.Nothing personal, but the occasional excursion of molecular biologists into the field of systematic biology does not differ much from the above described hypothetical experiment.

The discovery of evolution led to extension of the discussion between nominalists and proponents of other concepts about the boundaries between the species over time. The nominalist concept assumes that daughter species are formed in evolution more or less through continuous development from parent species, where the specific moment from which an individual in a particular related line can be considered to be a member of a new species is only a matter of convention.In contrast, a different concept of species assumes that, at a certain historical moment, a new species is formed in a particular related line, and is qualitatively different from the parent species.The decision as to which concept to favor is fundamentally complicated by the fact that a species is a set of a great many individuals and a great many related lines and no just a single entity.Individuals can differ substantially within a single species.Even if we were to come to the conclusion that a fundamental change occurs at a particular moment in a particular related line, which allows us to consider the particular individual to be a member of a different species, the frequency of the individuals with the particular property in the population is a continuous quantity that can gradually change over time or even fluctuate irregularly (Fig. XX.2).This means that the nominalist concept of species developing and splitting apart in time is quite legitimate and has a great many proponents at the present time. 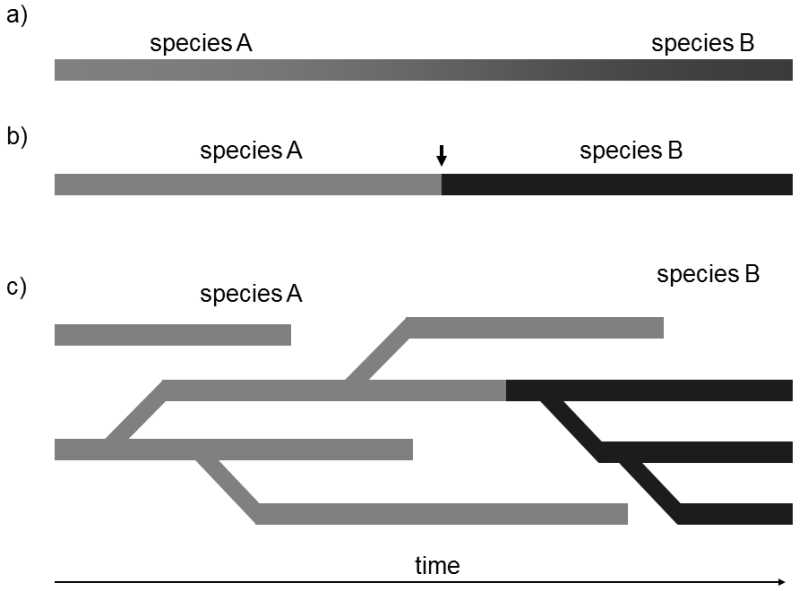 Fig. XX.2 The problematic nature of the realistic concept of a species in time. Generally, anagenetic changes accumulate gradually within a certain developmental line, so that the boundaries between maternal and daughter species must be delimited by convention (a). In some cases, an anagenetic change can occur in one geneaological line in certain generations that would justify us in immediately considering the altered individuals to be a new species (b). However, species are almost always formed by a greater number of geneaological lines and generally also a greater number of mutually more or less isolated populations. In this case, under all circumstances, the boundaries between the maternal and daughter species again become a matter of convention over time, as it is necessary to subjectively decide on the number of individuals with the new phenotype in the population that are sufficient for the population to be considered to constitute a new species

Was this information useful for you?
The classical Darwinian theory of evolution can explain the evolution of adaptive traits only in asexual organisms. The frozen plasticity theory is much more general: It can also explain the origin and evolution of adaptive traits in both asexual and sexual organisms Read more
‹ XX.2 There are several, principally different, theoretical concepts of species up XX.2.2 The realistic concept of species assumes that species and the boundaries between them are objectively present in nature, independently of man’s will ›
Draft translation from: Evoluční biologie, 2. vydání (Evolutionary biology, 2nd edition), J. Flegr, Academia Prague 2009. The translation was not done by biologist, therefore any suggestion concerning proper scientific terminology and language usage are highly welcomed. You can send your comments to flegr