XX.3.1 The typological definition of a species is built around the fact that individuals from a single species bear more resemblance to each other in their phenotype than individuals belonging to different species

The typological definition of species is not easy to defend theoretically but nonetheless is used most frequently in practice.This is primarily a result of the fact that the commonest task faced by the taxonomist is that of determining the species of a particular individual, i.e. deciding whether a certain individual belongs in a particular predefined species.Even in cases when the goal of the taxonomist at the particular moment is not to assign an individual to a known species, but to define the boundaries of new species, an attempt to assign all the studied individuals to known species is the first and an absolutely necessary step.

Most species are defined as typological species, i.e. on the basis of phenotype traits characteristic for their members, i.e. on the basis of properties that occur in the members of the given species and simultaneously are not present in the members of other species.In species with separate sexes and sexual dimorphism, with several developmental stages in their life cycles or with phenotype-differentiated casts, traits occurring in any of the life forms of this species can be used.Both morphological traits and physiological, biochemical and ethological traits can be used to define the boundaries between species.However, morphological traits are used most frequently to define species and, in these cases, they are designated as morphological species.If a large number of mostly mutually interchangeable traits are used to define species rather than a small number of key traits and the species are delimited by the exact methods of numerical phenetics, then the species are sometimes designated as phenetic species.

Some species are monotypical, i.e. they are represented by a single form in their entire area of occurrence.Other species are polytypical; they occur in several and frequently a great many phenotypically different forms within their area of occurrence or at a single site.In the first case, the species can be defined by a list of the traits that its members must have; in the second case, however, the individual traits are usually mutually interchangeable, so that membership in a certain species tends to be determined by the presence of a certain combination of traits and not the simple presence or absence of one particular trait or a single combination of traits.In the most complicated cases, a decision cannot be made on the membership of an individual in a particular species on the basis of its phenotype, as the presence of a certain combination of traits simply determines the probability with which a particular individual will belong to a certain species.If, for example, an individual bears a combination of alleles that occur only very rarely in one species and, on the other hand, relatively frequently in another species, it can be assumed that it will more probably be a member of the latter species.If a larger number of individuals from the same population is available, the frequency of the occurrence of the individual forms of various traits can be found and thus the species membership of these individuals can be determined with greater certainty (Ayala 1983)(Fig. XX.5). 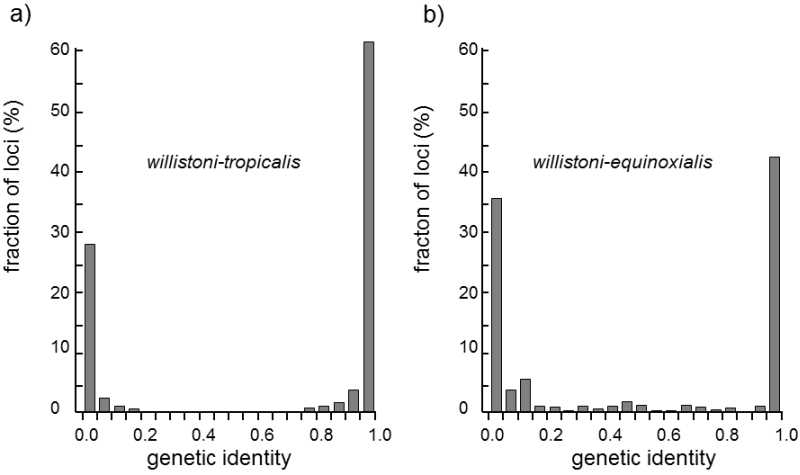 Fig. XX.5 Genetic differentiation between cryptic drosophila species. The coefficient of genetic identity, which reflects the fraction of identical genes in two populations, was determined for a population of two cryptic species of drosophila on the basis of study of the allozymes and the distribution of the frequency of these coefficients for the individual loci was plotted on the graph. It is apparent from the graph that a large portion of the loci either bear only an identical allele in both compared species, or bear different alleles for each species However, part of the loci in both species bear identical alleles in some populations and different alleles in other populations. Nonetheless, even in these cases, the frequencies of the relevant alleles differ substantially in both species. Consequently, it is generally possible, on the basis of knowledge of the pairs of alleles in some loci, to assign a individual to a certain species with great probability. According to Ayala (1983).

Was this information useful for you?
The classical Darwinian theory of evolution can explain the evolution of adaptive traits only in asexual organisms. The frozen plasticity theory is much more general: It can also explain the origin and evolution of adaptive traits in both asexual and sexual organisms Read more
‹ XX.3 Theoretical concepts of species are reflected in the way in which individual species are defined in taxonomic practice up XX.3.1.1 For a morphological species, the existence of cryptic species poses a considerable problem ›
Draft translation from: Evoluční biologie, 2. vydání (Evolutionary biology, 2nd edition), J. Flegr, Academia Prague 2009. The translation was not done by biologist, therefore any suggestion concerning proper scientific terminology and language usage are highly welcomed. You can send your comments to flegr