Analysis of the extensive data set relating to marine bivalves and snails has shown that, at times of background extinction, species with planktonic larvae had much smaller extinction rates than species with direct life cycles (Jablonski 1986)(Fig. XXII.10). The two types of organisms can be distinguished 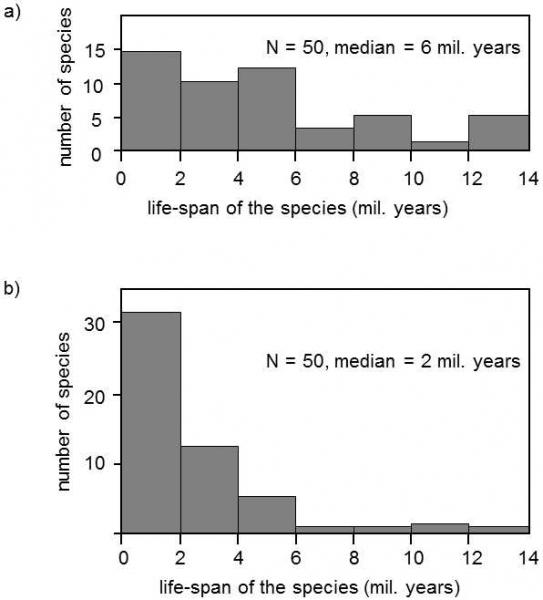 on the basis of morphological traits.It is not entirely clear whether this long-term trend is connected with the greater rate of speciation in species with direct life cycles, i.e. with greater spatial structuring of the population, or with the greater geographic ranges of species with planktonic larvae.It is characteristic that the differences in the average time of survival of groups of organisms disappears at least in some mass extinction events, for example during the mass extinction at the boundary between the Mesozoic and Tertiary (Jablonski 1986).

Was this information useful for you?
The classical Darwinian theory of evolution can explain the evolution of adaptive traits only in asexual organisms. The frozen plasticity theory is much more general: It can also explain the origin and evolution of adaptive traits in both asexual and sexual organisms Read more
‹ XXII.6.3 The likelihood of extinction is inversely correlated with the size of the geographic range of species; however, this correlation may disappear during periods of mass extinction up XXII.6.5 Planktonic species with dense, spatially unstructured populations are more sensitive to background extinction than benthic organisms; the viral theory of background extinctions offers a potential explanation ›
Draft translation from: Evoluční biologie, 2. vydání (Evolutionary biology, 2nd edition), J. Flegr, Academia Prague 2009. The translation was not done by biologist, therefore any suggestion concerning proper scientific terminology and language usage are highly welcomed. You can send your comments to flegr