XXVI.1 The character of cladogenesis within an evolutionary line is determined by the means and rate with which speciations and extinctions alternate

The rate of cladogenesis can differ substantially in the individual evolutionary lines (Fig. XXVI.1). 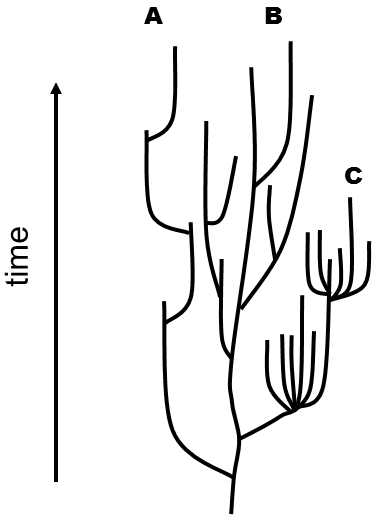 Fig. XXV.1 Topology of a phylogenetic tree. The cladogenesis of the various branches within a single phylogenetic line can differ substantially. Speciations occur rarely in branch A, where the old species rapidly becomes extinct after the emergence of a new species. Speciation occurs randomly within any branch in branch B where, in some cases, the old species dies out first and, in other cases, the new species is the first to become extinct. Most of the species become extinct in branch C without even undergoing speciation; however, at a certain moment, radiation, i.e. rapid repeated splitting off of new species, occurs in some species.

In some developmental lines, new species are formed preferentially or even exclusively from a particular parent species, while in others speciation can occur and thus the phylogenetic line branches evenly, i.e. with similar probability for all the species in the particular line.In some cases, most of the species of a certain line die out soon after their formation and only some undergo multiple repeated speciations; in other cases, there are no substantial differences in the frequencies of these events within the particular line.Very frequent speciation and extinction occur in some phylogenetic lines, while both types of macroevolutionary events are rare in others.In some lines, the number of speciations predominates over the number of extinctions in a certain period, while elsewhere the numbers of these two events are balanced.Simultaneously, the character of cladogenesis is quite hereditary within a single line.Comparative studies have shown that the shorter branches of a phylogenetic tree tend, on an average, split into shorter branches than their longer sister branches (Savolainen et al. 2002).This is very important from the viewpoint of species selection (see XXVI.3).

Was this information useful for you?
The classical Darwinian theory of evolution can explain the evolution of adaptive traits only in asexual organisms. The frozen plasticity theory is much more general: It can also explain the origin and evolution of adaptive traits in both asexual and sexual organisms Read more
‹ XXVI MACROEVOLUTION up XXVI.1.1 The character of cladogenesis within a phylogenetic line can change in time. ›
Draft translation from: Evoluční biologie, 2. vydání (Evolutionary biology, 2nd edition), J. Flegr, Academia Prague 2009. The translation was not done by biologist, therefore any suggestion concerning proper scientific terminology and language usage are highly welcomed. You can send your comments to flegr