XXVI.7.5 The existence of an evolutionary trend has also been used to explain the emergence of characteristics that harm their bearer and can, under certain circumstances, cause the extinction of the species

The existence of evolutionary trends has often even used to explain the empirically not very substantiated but, in the past, generally accepted fact that some changes occurring in accordance with an existing trend can, in an evolutionarily younger species, even lead to the emergence of excessive traits, i.e. traits whose presence negatively affects the fitness of the individual and, apparently, can lead to the extinction of the particular species or even the entire phylogenetic line.The emergence of extremely large antlers in the giant Pleistocene deer Megaloceros giganteus is a textbook example of such negative consequences of an evolutionary trend.It was long thought that these deer (called Irish elk in older texts) became extinct because an evolutionary trend led to such an increase in the size of their antlers that they prevented movement in a forested landscape.In actual fact the reasons for this extinction were different and the size of its antlers very exactly corresponded to the size of the antlers that an elk of this size should have (Gould 1974).The size of antlers does not increase linearly with an increase in body size but rather faster.This phenomenon is termed growth allometry and is valid to a greater or lesser degree for all body organs in all species of organisms (Fig. XXVI.11). 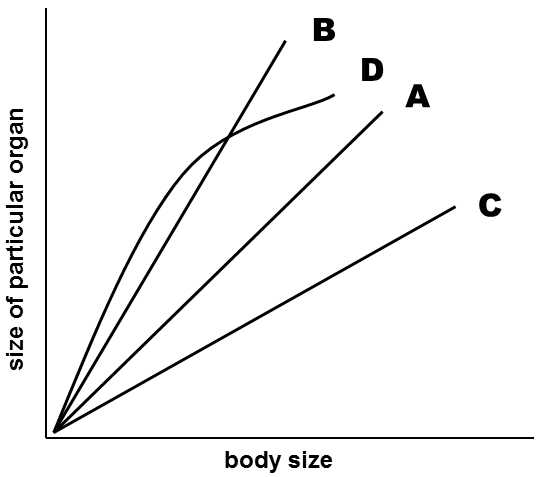 The dependence of a change in organ size (y) on changes in the size of the body (or some other organ) (x) is described by the allometric equation, which is generally written in the forms

where a, b and k are constants characteristic for the particular organ of the given species or the phylogenetic line.Changes in the relevant constants can occur during the phylogenesis of a certain line, so that the character of the allometric dependence can change.

The general existence of growth allometry in a three-dimensional world is basically a logical phenomenon, as the growth of the individual organs and the effectiveness of their functioning can be limited in some cases by their area, in other cases by their cross-section and in still other cases by their weight or volume.Thus, when the body dimensions of an organism increase, it is almost impossible for all the organs and all the morphological structures of the body to increase or decrease in size in direct proportion to the change in body size.If, for example, the radius of the brain were to increase in proportion to the body height, then its volume would increase nonlinearly with the body height (to the third power) so that, for example, the diameter of the veins that would supply it with blood would have to be disproportionately larger than would correspond to a linear increase in body size.In giant deer, there is probably an allometric dependence between the size of the body and of the antlers; put more simply, if the body dimensions of a deer increase by 10%, the head will carry antlers that are 20% heavier.The antler size in deers is not determined by some independent evolutionary trend but rather by selection in the first instance.If there were actually a trend towards an increase in antler size in evolution, then this would most certainly be an enforced trend (Simpson 1961), as a consequence of an increase in the body size of deer species.

The formation of excessive organs as a manifestation of an evolutionary trend is not considered to be very probable at the present time.Basically, doubt has been thrown on all known textbook examples over time and different explanations have been suggested.The main argument against the existence of this phenomenon consists in the fact that any species whose members are known from the paleontological record was relatively successful in evolution.If a species with a particular excessive trait survived in the environment for a relatively long time, it is strange that the presence of the trait would begin to be detrimental after some time and that it would become extinct.In my view, this argument is not very convincing.The species could become extinct at the time when changes that were incompatible with the presence of the particular trait occurred in the environment.For the giant deer, similar to other large ruminants of the late Pleistocene (woolly rhinoceros, mammoths, etc.), the afforestation of the originally open landscape could have been such a change. In addition, the presence of excessive structures need not, in itself, be the immediate cause of extinction; however, it may mean that a smaller population of the particular species remains in the territory in question.However, this increases the chance that the species could more readily become extinct through a fluctuation in the environmental conditions or the effects of chance.In order to decide whether an evolutionary trend could be the cause of the extinction of a species or phylogenetic line, it would be necessary to perform a series of comparative studies including a greater number of species, and the length of existence of the species with excessive structures and without them would be compared employing, for example, the method of evolutionary contrasts (Harvey & Pagel 1998).Similar studies have been performed for birds and were concerned with traits that were fixed, not by an evolutionary trend, but by sexual selection.It has been found that species with striking secondary sexual traits are actually more susceptible to extinction than species without these traits (Mclain, Moulton, & Sanderson 1999).Understandably, a basic obstacle to performance of similar studies for excessive traits is the means of identification of what is really an excessive trait and what is actually a useful and possibly optimum adaptation to the life style of the particular species.The long teeth of saber-toothed tigers were also long considered to be an excessive trait formed as a result of a “blind” evolutionary trend.In actual fact, this was a useful adaptation for killing large prey; saber teeth emerged at least four times during evolution and the relevant phylogenetic lines were evolutionarily quite successful, i.e. existed for a long time in nature (Gould 2002).

Was this information useful for you?
The classical Darwinian theory of evolution can explain the evolution of adaptive traits only in asexual organisms. The frozen plasticity theory is much more general: It can also explain the origin and evolution of adaptive traits in both asexual and sexual organisms Read more
‹ XXVI.7.4 An evolutionary trend could be the consequence of presence of specific evolutionary constraints up XXVII. CRITICISM AND DEFENCE OF EVOLUTIONARY THEORIES ›
Draft translation from: Evoluční biologie, 2. vydání (Evolutionary biology, 2nd edition), J. Flegr, Academia Prague 2009. The translation was not done by biologist, therefore any suggestion concerning proper scientific terminology and language usage are highly welcomed. You can send your comments to flegr