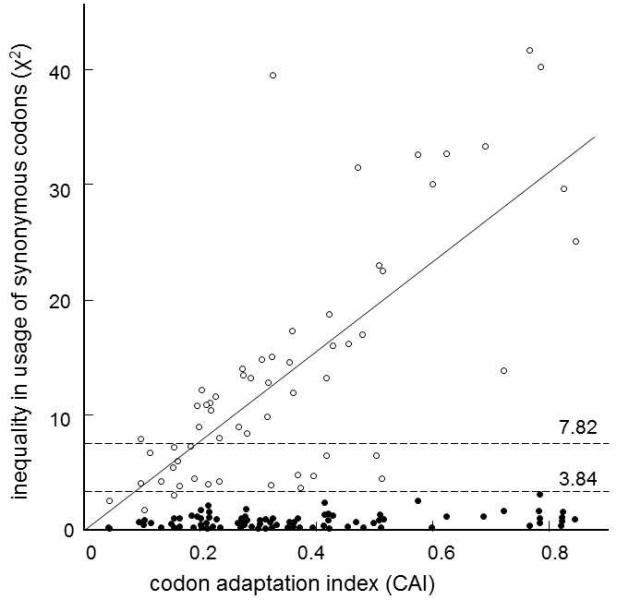 Comparison with the situation in natural populations has actually shown that relatively the greatest amount of nonsynonymous molecular polymorphism is exhibited by species that tend to form small populations, both for endosymbiotic bacteria in insects (Abbot & Moran 2002)and island species and bird populations (Johnson & Seger 2001).In case of vertically (i.e. from parents to progeny) transmitted endosymbiotic bacteria of the genus Buchnera, it was found that almost all the studied genes developed basically at a faster rate than similar genes in typically horizontally (between unrelated individuals in the population) transmitted bacteria, such as E. coli.Simultaneously, there was a much greater fraction of nonsynonymous nucleotide substitutions amongst the mutations in Buchnera than in E. coli.In contrast to other organisms, there was practically no correlation between the degree of expression of a certain gene and the inequality in the use of the individual synonymous codons in the genes of endosymbionts (Fig. IX.1).All these results demonstrate that a large fraction of mutations fall in the category of neutral mutations in relatively small populations of these endosymbiontic bacteria, which are, in addition, periodically exposed to a short-term reduction in numbers, i.e. passage through a bottleneck, during reproduction of their host.

Was this information useful for you?
The classical Darwinian theory of evolution can explain the evolution of adaptive traits only in asexual organisms. The frozen plasticity theory is much more general: It can also explain the origin and evolution of adaptive traits in both asexual and sexual organisms Read more
‹ IX.1 At the DNA level, selectively neutral mutations seem to represent a large portion of evolutionary changes up IX.3 Substitution rate for neutral mutations tend to be much higher than substitution rate for selectively significant mutations; nevertheless, in genes exposed to intense positive selection, fixation of selectively significant mutations can prevail ›
Draft translation from: Evoluční biologie, 2. vydání (Evolutionary biology, 2nd edition), J. Flegr, Academia Prague 2009. The translation was not done by biologist, therefore any suggestion concerning proper scientific terminology and language usage are highly welcomed. You can send your comments to flegr