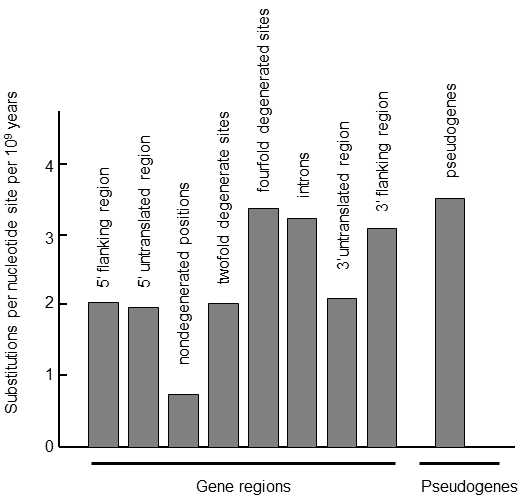 The main reason for reduction of the rate of fixation of nonsynonymous mutations is negative selection (purifying selection), removing from the population mutations that reduce the fitness of their bearers.The vast majority of all mutations fall in this category in a sufficiently large population.Some genes are capable of tolerating a large number of changes without greatly affecting the functioning of the relevant protein.These proteins change very rapidly in evolution.On the other hand, other genes are very conservative and any change in their sequence is greatly manifested in the functioning of the protein and thus in the fitness of the particular individual (Fig. IX.3). 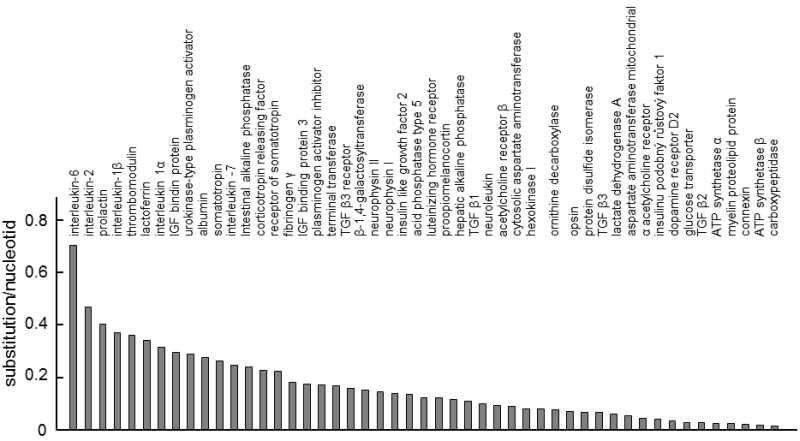 Fig. IX.3. Differences in the rate of evolution between proteins. The graph shows how many synonymous substitutions correspond to the nucleotide for the 49 proteins for which the authors of the study had the sequences from primates, ungulates and rodents at their disposal. It is apparent that the rate of evolution of the individual proteins differs substantially. Data according to Ohta (1995a), modified according to Page and Holmes (2001).

If the intensity and character of selection pressures, to which its representatives are exposed, change during the evolutionary history of a certain taxon, then the intensity of selection acting on the individual genes also changes.If a gene is exposed to more intense selection in a certain period, this is generally manifested by a reduction in the substitution rate for selectively significant mutations.In this case, at a molecular level, a reduction in the overall substitution rate and also a reduction in the ratio of the number of nonsynonymous mutations to the number of synonymous mutations are observed.In both cases, we must relate the numbers of synonymous and nonsynomous mutations to the numbers of positions in which synonymous or nonsynonymous mutations can occur in the given gene.In highly conservative genes exposed to intense negative selection, synonymous mutations substantially predominate and this ratio is thus much lower than 1.From an evolutionary standpoint, the genes for proteins that have a great many functions and that, e.g., interact physically with a large number of other proteins, are very conservative (Fraser et al. 2002).This ratio approaches a value of 1 in DNA sections that usually do not have any function, e.g. in pseudogenes, i.e. in unused and usually incomplete or otherwise damaged copies of genes.In contrast, in genes that are, or were in the past, exposed to intense positive selection, i.e. selection for evolutionary change, nonsynonymous mutations can predominate and this ratio can substantially exceed a value of 1.Genes participating in some way in the co-evolutionary battle amongst parasites and hosts, for example the genes for the components of the immune system, change especially rapidly (Endo, Ikeo, & Gojobori 1996)(Fig. IX.4).Genes that 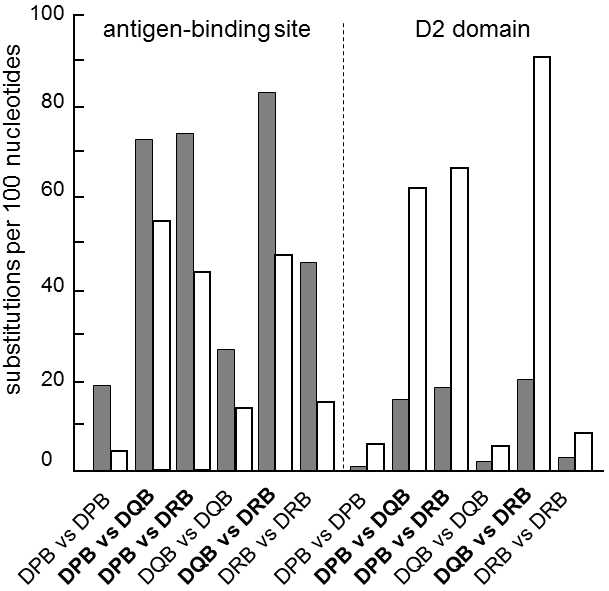 participate in interactions between members of the same species during reproduction, for example receptors on the surface of gametes, proteins expressed in the somatic tissues of the reproductive organs, etc. also develop rapidly (Lee, Ota, & Vacquier 1995; Vacquier 1998; Singh & Kulathinal 2000).This trend is especially important in taxa with polyandrous species in which both intense competition amongst sperms and also stronger genetic conflict between males and females occurs (Panhuis et al. 2001).The ratio of fixed nonsynonymous and synonymous mutations is usually greater than one in these proteins.This situation is encountered in approximately 0.5% of all the proteins that have so far been sequenced.

Was this information useful for you?
The classical Darwinian theory of evolution can explain the evolution of adaptive traits only in asexual organisms. The frozen plasticity theory is much more general: It can also explain the origin and evolution of adaptive traits in both asexual and sexual organisms Read more
‹ IX.2 The substitution rate of neutral mutations does not depend on population size; the share of selectively neutral mutations in total mutations, and thus also the overall rate, is, however, higher in small populations up IX.4 Accumulation of neutral mutations in phylogenesis can be used as a molecular clock, allowing biologists to date phylogenetic events ›
Draft translation from: Evoluční biologie, 2. vydání (Evolutionary biology, 2nd edition), J. Flegr, Academia Prague 2009. The translation was not done by biologist, therefore any suggestion concerning proper scientific terminology and language usage are highly welcomed. You can send your comments to flegr