IX.4.2 Different genes in the same organism develop at different rates, even if the analysis only comprises selectively neutral traits

There are very substantial differences in the rate of the molecular clock between the individual genes of a single species.Sequences of pseudogenes change fastest, i.e. genes that have lost their function because of mutation in the regulation or coding region, and thus are not expressed in the cells or are expressed in the form of an inactive product.The untranscribed or untranslated regions of functional genes, including intron regions, exhibit high substitution rate.Exon regions develop most slowly (see Fig. IX.2).In genes coding, for example, ribosomal RNA, sections forming the double-helix secondary structure change most rapidly (Ben Ali et al. 1999), as only complementariness to the relevant base in the opposing parts of the chain and not the kind of pairing bases is generally important here from the standpoint of functioning of the molecule. 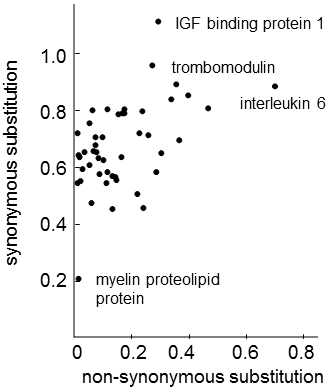 It is apparent that the intensity and character of selection, to which the relevant gene or relevant section of the gene is exposed, is the decisive parameter affecting the substitution rate.Substitution rates differ substantially for the individual genes of a single organism and differences in these rates vary over a great many orders of magnitude.There are primarily very drastic differences in the substitution rates of nonsynonymous mutations.In contrast, the substitution rates for synonymous mutations vary in a much narrower range of values (Fig. IX.7).This is because the rate and probability of fixation of nonsynonymous mutations, i.e. mutations that lead to a change in the primary structure of the coded proteins and can thus be substantially manifested in changes in the fitness of their carriers, is determined by the intensity of the selection pressures active in the evolution of the relevant gene.These selection pressures understandably differ substantially for various genes (and various parts of these genes).However, there is a strong positive correlation between the rates of fixation of nonsynonymous and synonymous mutations.The source of this correlation is primarily the effect of genetic draft, a process that is also called thehitchhiking effect orgenetic hitchhiking.Because of the existence of this process, neutral mutations become fixed in the gene or are eliminated from the population together with selectively significant mutations (Braverman et al. 1995; Charlesworth & Guttman 1996).Thus, if a certain gene becomes the object of selection at a certain time, whether positive selection, i.e. towards evolutionary change, i.e. fixation of new mutations, or negative selection, i.e. towards evolutionary invariability, i.e. towards elimination of most new mutations, the rate of fixation of selectively significant and selectively neutral mutations is changed for it.The practical impact of this effect on the usefulness of the molecular clock in phylogenetics is that we must always attempt to analyze those genes that were not subject to changes in selection pressure in the past, even if we use only selectively neutral traits for the analysis.

Was this information useful for you?
The classical Darwinian theory of evolution can explain the evolution of adaptive traits only in asexual organisms. The frozen plasticity theory is much more general: It can also explain the origin and evolution of adaptive traits in both asexual and sexual organisms Read more
‹ IX.4.1 When using the molecular clock in phylogenetics, it is necessary to bear in mind that it ticks at a different rate for individual genes, individual taxa and even for the same gene and the same taxon in time up IX.4.3 The substitution rate and the ratio of synonymous and non-synonymous mutations for different genes can change irregularly during evolution ›
Draft translation from: Evoluční biologie, 2. vydání (Evolutionary biology, 2nd edition), J. Flegr, Academia Prague 2009. The translation was not done by biologist, therefore any suggestion concerning proper scientific terminology and language usage are highly welcomed. You can send your comments to flegr