IX.4.3 The substitution rate and the ratio of synonymous and non-synonymous mutations for different genes can change irregularly during evolution

The molecular clock is a stochastic clock.Thus, it cannot be expected that the constant number of mutations would be always fixed in a particular gene over the same time.However, if mutations were fixed mainly by genetic drift, the number of substitutions over time T in various species that diverged from a common ancestor at a certain moment should have Poisson distribution with an average of uT (where u is the mutation rate).The variation coefficient R(T), expressing the ratio of the variance and the average should thus be equal to 1.In actual fact, this variation coefficient is greater than 1 for most studied taxa (Ohta 1996; Kreitman 1996).This means that the rate of the molecular clock differs in time and for the individual lines more than would follow from the simple model of random accumulation of neutral mutations.Similarly, the ratio of fixed synonymous and nonsynonymous mutations fluctuates in time.

Study of changes in the substitution rate in the genes for 8 mammal hormones over a longer period of time actually demonstrated that this rate fluctuates substantially and highly irregularly for the individual genes (Wallis 2001)(Fig. IX.8).Overall, 62% of the substitutions in the genes occurred in a time 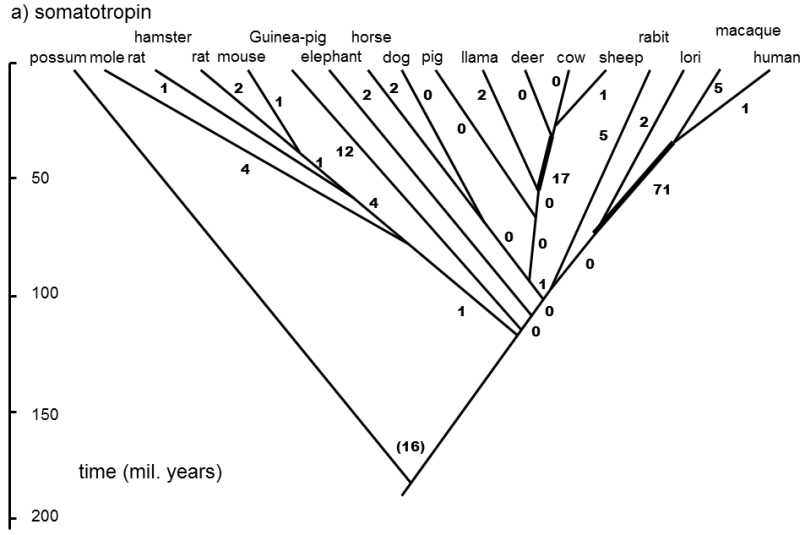 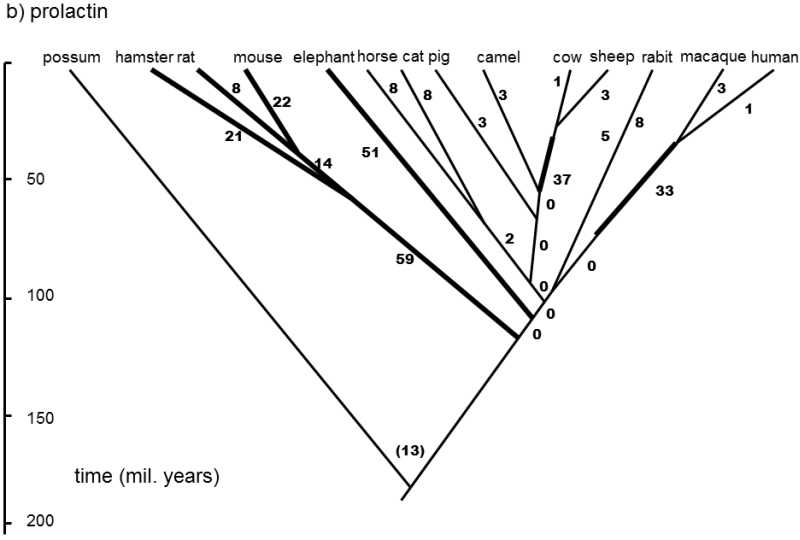 period encompassing only 15% of the monitored period.The substitution rate increased by up to 50x in some cases in a period of accelerated evolution.Simultaneously, the episodes of accelerated evolution did not agree in time for the individual proteins.These and similar results indicate that, when the molecular clock is used to study phylogeny, it is necessary to study the accumulation of mutations in several, where feasible in a great many genes, between which there is neither a genetic linkage nor a functional connection.

A number of theories have attempted to explain the great scatter in the rate of the molecular clock (Cutler 2000).It is most frequently assumed that most mutations are actually not neutral but slightly negative (see V.5).In this case, the substitution rate would be affected by a number of demographic factors and could fluctuate substantially over time.Other theories assume that changes in the mutation rate can occur in certain phases of development of a taxon or during a certain time period (Page & Holmes 2001).

Was this information useful for you?
The classical Darwinian theory of evolution can explain the evolution of adaptive traits only in asexual organisms. The frozen plasticity theory is much more general: It can also explain the origin and evolution of adaptive traits in both asexual and sexual organisms Read more
‹ IX.4.2 Different genes in the same organism develop at different rates, even if the analysis only comprises selectively neutral traits up IX.4.3.1 Step changes in substitution rate can be related to a change in the gene function or to a change in the number of its copies in the genome ›
Draft translation from: Evoluční biologie, 2. vydání (Evolutionary biology, 2nd edition), J. Flegr, Academia Prague 2009. The translation was not done by biologist, therefore any suggestion concerning proper scientific terminology and language usage are highly welcomed. You can send your comments to flegr