IX.5 There is a great deal of selectively neutral genetic polymorphism at the molecular level in natural populations

where xi  is the frequency of the i-th allele in the population.Thus, a population containing a large number of alleles with the same frequency has the largest H value.The average heterozygosity index for the given population can be calculated on the basis of the heterozygosity indices as the arithmetic mean for the individual genes.If the heterozygosity index is calculated on the basis of sequence data, it is also sometimes called thegene diversity index.The nucleotide (aminoacid) diversity index (B) can also be calculated on the basis of sequence data; this corresponds to the average number of nucleotide (aminoacid) differences between all the pairs of alleles in the sample divided by the length of the sequences of the relevant alleles.The average number of pair differences Π can be calculated for the whole population or, to be more precise, for the population sample, as

As was mentioned at the beginning of the chapter, the results obtained by the methods of molecular biology indicate that the individual members of a particular species differ in the occurrence of various nucleotides in a great many positions on their genes and thus the gene pool of all species of organisms contains an enormous amount of genetic polymorphism.A considerable part of this polymorphism in the gene pool of a species and the gene pools of the individual populations apparently exists because it is selectively neutral and selectively neutral traits can persist in the population for a very long time.Most selectively neutral traits are eventually eliminated from the population by genetic drift or genetic draft; however, mutation processes generate new polymorphisms by that time.Mutations in all parts of the genome that do not code any protein, especially in pseudogenes, i.e. inactivated genes, and thus nonfunctional copies of genes, are usually considered to be selectively neutral.The category of neutral mutations apparently also includes a large part of mutations in introns and also part of synonymous mutations, i.e. nucleotide substitutions, for example in the third positions of a large percentage of nucleotide triplets.Because of the degeneracy of the genetic code, i.e. that fact that, in a great many cases, 2-6 various triplets mostly differing in the nucleotide in the third position code the same aminoacid, the substitution of a nucleotide here does not lead to substitution of an aminoacid in the coded protein.However, in absolute values, even these categories of mutations need not and apparently do not have zero selection coefficients (Akashi 1995).In the case of introns, a change in the primary sequence can lead to a change in the efficiency of their splicing at the RNA level or changes in the secondary structures of the introns can also directly affect the intensity and rate of transcription of the relevant genes.For synonymous mutations, a change in the synonymous codon can affect the rate of the transcription, as the individual tRNA serving for translation of the synonymous codons are not present in the cell in the same number of copies and translation of mRNA occurring with participation of rarer tRNA is necessarily slower (see also XI.6.2.5).The fact that the primary structure of the gene affects not only the primary structure of the resulting proteins but, through the effect on the secondary structure of the DNA and mRNA, also the processes of regulation of DNA transcription and break-down of the relevant RNA, may be important.Thus, synonymous mutations do not affect the aminoacid sequence of the relevant protein but can substantially affect its concentration in the cell.Studies performed on drosophila did actually show that unevenness in the use of the individual synonymous codons is negatively correlated with divergence in synonymous mutations between related drosophila 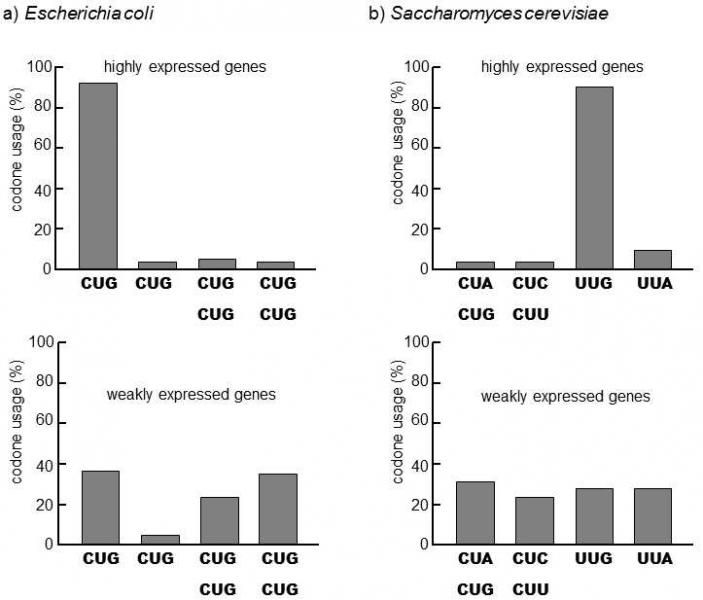 Fig. IX.14. Uneven use of the individual synonymous codons for leucine in strongly and weakly expressed genes. It is apparent from the graph that the use of the individual synonymous codons is far less even in strongly expressed genes than in weakly expressed genes. The most probable explanation is that it doesn’t much matter in poorly expressed genes if codons, whose relevant tRNA is present in a small number of copies in the cells, are used for coding leucine. The occurrence of these codons retards the translation of the particular mRNA, which could be detrimental in the case of strongly expressed genes. The efficiency of the selection is very high for the bacteria E. coli and the yeast S. cerevisiae, i.e. in species forming large populations. As a consequence, even synonymous mutations slightly reducing the rate of translations can be a subject of natural selection. Data according to Ikemura (1981, 1982), modified according to Li and Graur (2001).

species (Fig. IX.14)(Sharp & Li 1989). As the degree of unevenness in the use of synonymous codons is also positively correlated with the intensity of expression of the individual genes, it is apparent that stronger negative selection acts against synonymous mutations in more intensely expressed genes compared to genes that are not expressed strongly (Fig. IX.15) (Akashi 1994). 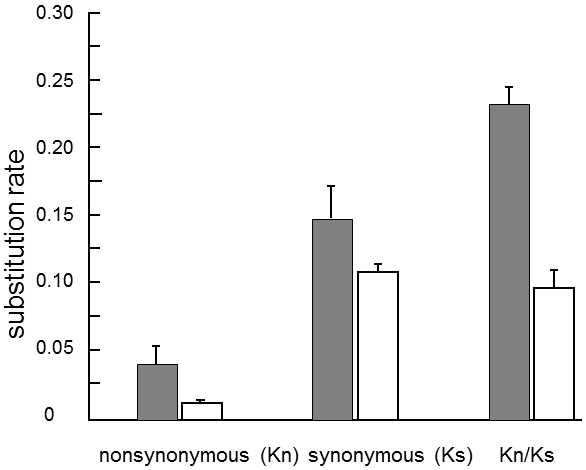 Was this information useful for you?
The classical Darwinian theory of evolution can explain the evolution of adaptive traits only in asexual organisms. The frozen plasticity theory is much more general: It can also explain the origin and evolution of adaptive traits in both asexual and sexual organisms Read more
‹ IX.4.6 Difficulties in calibrating the molecular clock pose another serious obstacle to its use up IX.5.1 The amount of polymorphism in DNA sequences should be proportionate to the effective population size ›
Draft translation from: Evoluční biologie, 2. vydání (Evolutionary biology, 2nd edition), J. Flegr, Academia Prague 2009. The translation was not done by biologist, therefore any suggestion concerning proper scientific terminology and language usage are highly welcomed. You can send your comments to flegr