IX.5.3 Part of molecular polymorphism in populations is maintained through selection for heterozygotes and frequency-dependent selection

Selection, specifically selection in favor of heterozygotes and also various forms of frequency-dependent selection (see Chap. VIII) are also responsible for the prolonged survival of part of molecular polymorphism in the gene pool of the population.This can maintain, in the population, both mutations affecting the  fitness of their bearers and also selectively neutral mutations occurring in genetic linkage with selectively significant mutations (see II.6).For a number of decades, experimental studies and a great many discussions between neutralists and selectionists have been concerned with the fraction of molecular polymorphism that is maintained in the population by mutation pressure and the fraction that is maintained by these two selection mechanisms.

If the biological fitness of heterozygotes, i.e. individuals that have two different alleles in a certain locus in their two gene sets, is greater than that of either of the two homozygotes, the two alleles will be maintained in the population for a long time with nonzero frequency, even if the fitness of the two homozygotes differs substantially.The phenomenon of elevated fitness of heterozygotes is quite common (Novotná a spol. 2008).However, at the present time, it is apparent that selection in favor of heterozygotes cannot be the main mechanism of maintenance of molecular polymorphism in the population.The amount of molecular polymorphism is too great.It can be calculated that, if a substantial part were maintained in the population by selection in favor of heterozygotes, the fitness of homozygotes formed, e.g., through reproduction amongst relatives or parthenogenesis, would have to be so low that they would not be able to reproduce at all (Lewontin 1974).Similarly, it is apparent that polymorphism is encountered to a similar degree in haploid organisms, where the males are haploid.

One of the ways of determining to what degree, and under what conditions, the individual categories of mutations are maintained in the population because of their selection neutrality and to what degree other mechanisms are active, consists in comparison of the distribution of the actual frequencies of the same alleles in various populations with the distribution that we would expect in case of validity of the neutral model, i.e. the model that assumes only the action of genetic drift.The relatively small scatter in the frequencies of the individual alleles of a great many polymorphic genes tends to indicate that other mechanisms are operative in a great many cases (Lewontin 1974; Kelly & Wade 2000) (Fig. IX.16).This is especially true for genes whose alleles are distinguished on the basis of 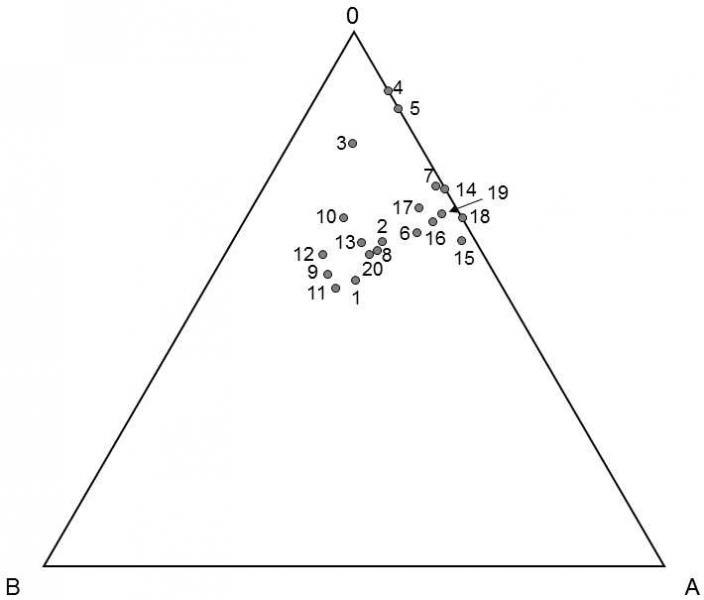 Fig. IX.16. Frequency of the individual alleles of the ABO-system in various ethnic groups. Each axis corresponds to one allele of the ABO-system (no differentiation is made between A1 and A2). The points on the graph form a clearly visible cluster in the area with a frequency of approx. 20% allele A, 15% allele B and 65% allele 0. The points deviating most from these ratios, e.g. with zero frequency of allele B, usually correspond to small, geographically very isolated ethnic groups. 1-3 Africans, 4-7 (Red) Indians, 8-13 Asians, 14-15 Australians, 16-20 Europeans. Data according to Jacquard (1970), modified according to Lewontin (1974).

alozyme analysis (see XXIV.3.6).Frequency-dependent selectionis apparently the most probable candidate, as it can maintain a stable frequency of different alleles in the population for a long time, while the same or a similar frequency of the given allele is established in independent populations.In some cases, for example, in the case of the Rh-factor in humans, the scatter in the frequency is, to the contrary, substantially greater than would follow from the neutral model (Lewontin 1974).Once again, in this case, frequency-dependent selection is the most probable candidate for explanation of this phenomenon; however, here the selection coefficient corresponding to the individual alleles is apparently dependent on the external conditions at the site of occurrence of the particular population (Flegr et al. 2008).

Was this information useful for you?
The classical Darwinian theory of evolution can explain the evolution of adaptive traits only in asexual organisms. The frozen plasticity theory is much more general: It can also explain the origin and evolution of adaptive traits in both asexual and sexual organisms Read more
‹ IX.5.2 By virtue of genetic draft, polymorphism in DNA sequences is directly proportionate to the intensity of genetic recombination in the corresponding part of the genome up IX.5.4 Different mechanisms can maintain genetic polymorphism within one species and give rise to inter-specific genetic diversity ›
Draft translation from: Evoluční biologie, 2. vydání (Evolutionary biology, 2nd edition), J. Flegr, Academia Prague 2009. The translation was not done by biologist, therefore any suggestion concerning proper scientific terminology and language usage are highly welcomed. You can send your comments to flegr