V.1 Changes in the frequency of alleles in the genetic pool can be produced by random processes, by genetic drift.

Genetic driftrefers to random shifts in the frequency of the individual alleles in the gene pool of a certain population (Fig. V.1).Simultaneously, these shifts are not caused by differences in the selection values of the relevant alleles.They exist because of discrepancy amongst the almost infinite number of different genotypes that can theoretically be formed through random combination of the individual alleles contained in the gene pool and the incomparably smaller number of actually formed genotypes, which is maximally equal to the number of individuals in a given generation.As, in each generation, of the total set of gametes, only a very limited sample of randomly selected zygotes develop, it must necessarily happen that the presence of the individual alleles in the gene pool changes randomly from one generation to the next.In addition, changes caused by genetic drift have a highly accumulative character.If a five-membered population of diploid organisms originally contained the same contents of allele A and allele a, then there is only 25% probability that this ratio will be retained in the first generation.The change in the content of alleles from one generation to the next depends on chance and on the contents of alleles in the previous, but not in the zero generation.As a consequence, in the second generation, the probability of the same contents of both alleles will be, not 25%, but only 18% and, in the tenth generation, this will decrease to only 5%. 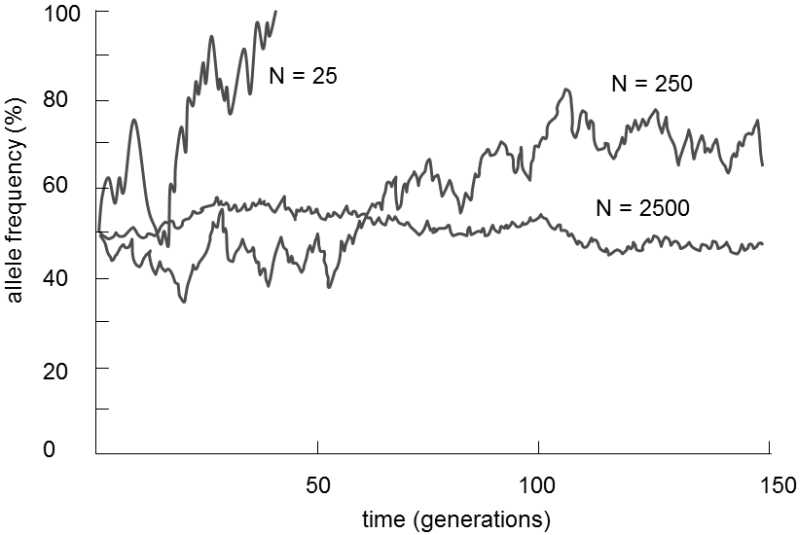 Fig. V.1. Decrease in the frequency of the alleles of a certain gene as a consequence of the action of genetic drift. At time t0, the population contains two alleles with the same frequency. Both alleles have the same selection coefficient. However, by chance, their frequencies in the gene pool gradually fluctuate so that, sooner or later, one of them reaches zero frequency and disappears irretrievably from the population. In a small population, the random fluctuation in the frequencies of alleles is much more marked and chance elimination of one of the alleles in the population will thus occur much sooner. (N is the number of individuals in the population.)

Was this information useful for you?
The classical Darwinian theory of evolution can explain the evolution of adaptive traits only in asexual organisms. The frozen plasticity theory is much more general: It can also explain the origin and evolution of adaptive traits in both asexual and sexual organisms Read more
‹ V GENETIC DRIFT up V.2 In populations of finite size, genetic drift leads to fixation of some alleles. ›
Draft translation from: Evoluční biologie, 2. vydání (Evolutionary biology, 2nd edition), J. Flegr, Academia Prague 2009. The translation was not done by biologist, therefore any suggestion concerning proper scientific terminology and language usage are highly welcomed. You can send your comments to flegr