V.2 In populations of finite size, genetic drift leads to fixation of some alleles.

There is the same probability that, through genetic drift, the frequency of certain alleles will increase or decrease from one generation to the next.In an infinitely large population, genetic drift would thus lead to regular reversible fluctuations in the frequency of the individual alleles.From the standpoint of evolutionary processes, these random fluctuations should be of relatively small importance.

However, the situation is different in real populations.The sizes of the populations of fauna and flora are always finite and are frequently greatly limited.Species living permanently in relatively isolated populations (domains) containing only several dozen individuals are not exceptional amongst mammals.Genetic driftmust necessarily lead to fixation of alleles in small populations.It is irrelevant how many various alleles were present in the population in the beginning.Following a sufficiently large number of generations, the bearers of only one of them will remain in the population (Fig. V.2). 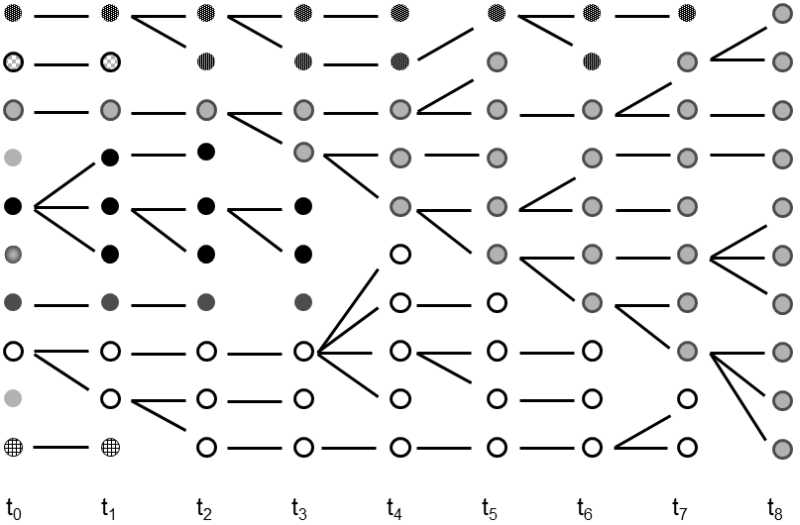 Fixation of alleles occurs when their frequency reaches 100 %, i.e. when the frequencies of the other alleles of the relevant gene decrease to zero for some reason.There can be various reasons for a similar decrease in frequency, such as natural selection acting against the bearers of certain alleles.However, it is most probable that the process leading to fixation of the greatest number of mutations will be genetic drift or a process whose biological consequences are very similar (i.e. fixation of neutral mutations) – genetic draft (see IX.5.2).

The mechanism of fixation of alleles through the action of genetic drift in individual populations can best be demonstrated on the example of a large number of small populations in which alleles A and a are present in the same frequencies at the beginning of the experiment (Fig. V.3). 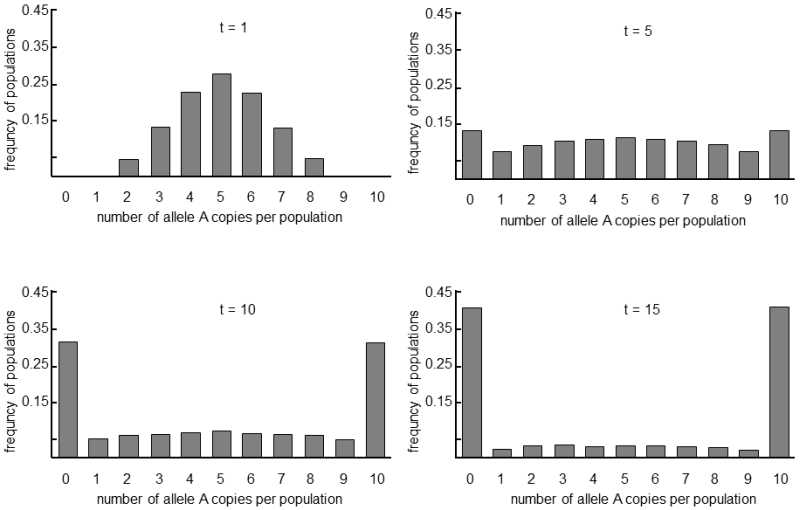 Was this information useful for you?
The classical Darwinian theory of evolution can explain the evolution of adaptive traits only in asexual organisms. The frozen plasticity theory is much more general: It can also explain the origin and evolution of adaptive traits in both asexual and sexual organisms Read more
‹ V.1 Changes in the frequency of alleles in the genetic pool can be produced by random processes, by genetic drift. up V.2.1 The number of homozygotes increases after a large population splits into a number of smaller ones. ›
Draft translation from: Evoluční biologie, 2. vydání (Evolutionary biology, 2nd edition), J. Flegr, Academia Prague 2009. The translation was not done by biologist, therefore any suggestion concerning proper scientific terminology and language usage are highly welcomed. You can send your comments to flegr