V.4 In small populations, the fate of any mutation is more likely to be decided by genetic drift than by selection.

So far, we have considered only the action of genetic drift on neutral traits.However, from the standpoint of evolution, the behavior of selectionally important traits is far more important, i.e. traits whose frequency in the population changes through the action of natural selection. 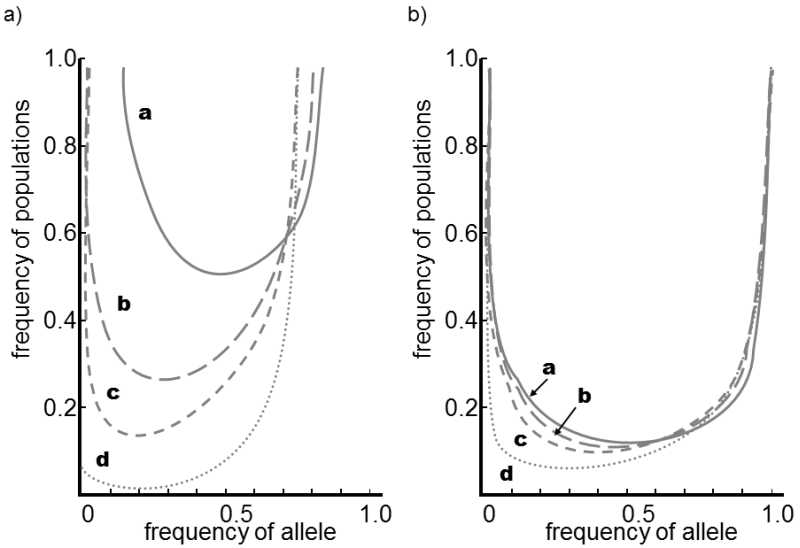 Fig. V.10. Mutual interplay of selection and genetic drift. In a population of heterozygotes divided at time t0 into a large number of separate populations with size N, over a sufficient number of generations the action of genetic drift creates a state where the numbers of individual small populations with certain frequencies of the studied alleles will have U-shaped distribution (see also Fig. V.3). If the bearers of one of the alleles are favored by selection compared to bearers of the second allele, the distribution will have highly asymmetrical shape as the population with a greater frequency of the more advantageous allele will predominate in the set. The greater the selection advantage of one of the alleles, the closer will be the shape of the distribution to curve d in graph (a). However, if a substantially smaller population (b) is involved, the effect of genetic drift will predominate over the effect of selection and the shapes of the distribution curves will depend very little on the selection coefficient. In the given case, the frequencies of the two alleles were identical at time t0; in case (a), the population size n was four times greater than in case (b) and the selection coefficients for the less advantageous allele were equal to 0, 1/2N, 1/N and 2/N for curves a, b, c and d, respectively.

If this is a new mutation in a population of diploid organisms (q = 1/2N), the equation assumes the form

The familiar equation p = 1/2N is obtained for neutral mutations.

If the absolute value of the selection coefficient is small, it will hold approximately that:

For small positive s and large N, this equation is reduced to

For diploid organisms with a generation period of 2 years and effective population size of Ne = 106,fixation of a neutral mutation takes approximately 8 million years but fixation of a mutation with a selection coefficient of 0.01 takes only 5800 years.It is interesting that fixation of a negative mutation with a selection coefficient of -0.01 also requires an average of 5800 years.It is obvious that a negative mutation will become fixed in the population with far lower probability and thus far less often; however, those that do become fixed are fixed very rapidly.

The frequency of fixation of mutations k is equal to the product of the frequency of the formation of the mutations u and the probability of their fixation p.For neutral mutations, we derived that k = 2Nu/2N = u.For selectionally advantageous mutations, the following equation is obtained in a similar manner

Was this information useful for you?
The classical Darwinian theory of evolution can explain the evolution of adaptive traits only in asexual organisms. The frozen plasticity theory is much more general: It can also explain the origin and evolution of adaptive traits in both asexual and sexual organisms Read more
‹ V.3.3 The frequency of fixation of neutral mutations in time does not depend on the size of the population. up V.5 Slightly negative (slightly harmful) mutations constitute an important category of mutations. ›
Draft translation from: Evoluční biologie, 2. vydání (Evolutionary biology, 2nd edition), J. Flegr, Academia Prague 2009. The translation was not done by biologist, therefore any suggestion concerning proper scientific terminology and language usage are highly welcomed. You can send your comments to flegr