Molecular driveentails a number of mechanisms connected primarily with replication, recombination and repairing of nucleic acids. These mechanisms favour the formation and proliferation of certain sequential motifs in the gene pool of the population regardless of the degree to which the existence of these motifs is manifested in the phenotype of the organism and the degree to which it affects its biological fitness. The best-known processes active in the functioning of molecular drive include gene conversion, transposition, and also processes directly dependent on replication, i.e.uneven crossing-over andslipped-strand mispairing (Tachida 1993). 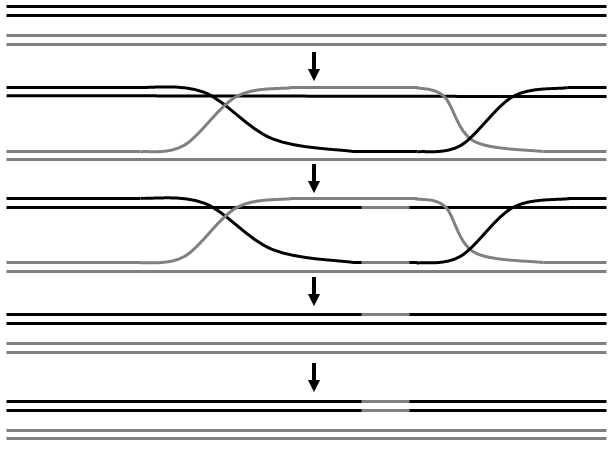 Was this information useful for you?
The classical Darwinian theory of evolution can explain the evolution of adaptive traits only in asexual organisms. The frozen plasticity theory is much more general: It can also explain the origin and evolution of adaptive traits in both asexual and sexual organisms Read more
‹ VI.2.1.1.1 The term selfish DNA must not be confused with the terms selfish gene or ultraselfish gene. up VI.2.2.1 In gene conversion, one allele is converted into another allele. ›
Draft translation from: Evoluční biologie, 2. vydání (Evolutionary biology, 2nd edition), J. Flegr, Academia Prague 2009. The translation was not done by biologist, therefore any suggestion concerning proper scientific terminology and language usage are highly welcomed. You can send your comments to flegr