VI.2.2.4 Multiplication can also be the product of the nucleotide slipped﷓strand mispairing mechanism.

Slipped‑strand mispairing leads first to local short-term denaturing of the double-helix DNA molecule and subsequently to renaturation of the segment of the strand, not with the original complementary part of the opposing strand, but with some other area containing the complementary base. If this event is followed by reparation and further replication of the given DNA segment, this is followed by either multiplication or, on the other hand, deletion of a certain sequential motif (Levinson & Gutman 1987)(Fig. VI.7). 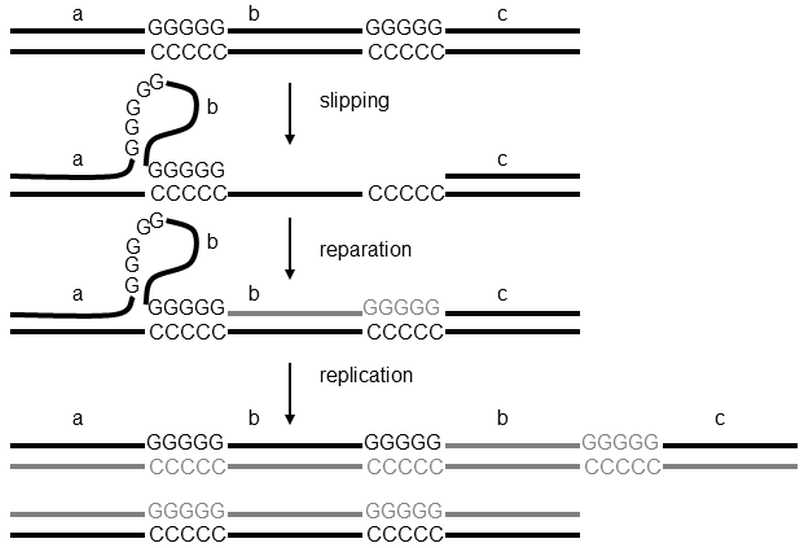 Fig. VI.7. Duplication of the DNA segment by nucleotide slipped-strand mispairing. If two segments with a high level of sequential homology are located at a suitable distance apart, it can readily occur that single slipped-strand breakage can lead in the given area to mutual shifting of the chains and subsequent mispairing between non-corresponding segments. Reparation enzymes can supplement the lacking segments of the DNA chains and subsequent replication can lead to duplication of the relevant critical segment in one of the daughter molecules.

Slippage can also occur during the replication itself by slippage of the template for the DNA-polymerase enzyme (Fig. VI.8). In the site where repetition occurs of a certain nucleotide or short oligonucleotide, the DNA-polymerase can “slip” backwards or forwards along the template at a certain moment and synthesize a new DNA strand twice in a row according to the same template section, or leave out a certain section of the template. The probability of this event is inversely proportional to the length of the oligonucleotide of which the given repetition consists and directly proportional to the number of oligonucleotides in the repetition. As a consequence, although slippage can be followed by insertion or deletion of the particular motif, there is clear asymmetry in the probability of the two events. Insertion of a new copy increases the probability of further slippage, while deletion reduces it. For example, it is known that the frequency of spontaneous insertion and deletion of A in pentanucleotide AAAAA is more than one order of magnitude greater than their frequency in tetranucleotide AAAA. This means that the familiar principle of positive feedback is important in multiplication of repetitive motifs and the entire process of multiplication of certain motifs has a marked accelerating, avalanche character. 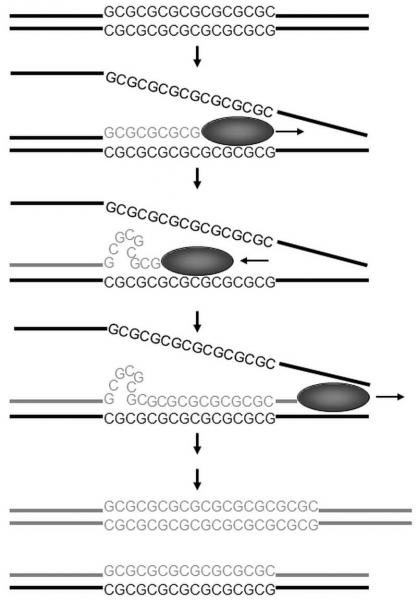 Fig. VI.8. Insertion of an oligonucleotide by template slippage. If a simple sequential motif is present at a certain site in the DNA, for example a longer repetition of a certain dinucleotide, the two chains are quite frequently also mutually shifted during DNA replication. In this case, this repetition is frequently lengthened to include one or more dinucleotides. The figure depicts slippage of DNA-polymerase backwards by several nucleotides in the area of the repetition and subsequent lengthening of the repetition by four nucleotides during the next replication cycle.

Multiplication and the general mutability of simple repetition segments form the basis for the microsatellite analysis technique (see XXIV.3.7).This technique, which is based on amplification and characterization of the individual loci containing simple repetitions, is broadly employed in various population studies. The mutability of these segments allows microsatellite analysis to monitor a large amount of genetic polymorphism even in mutually quite related individuals. This can be employed, for example, in determining paternity or in determining the internal structure of a population.

Was this information useful for you?
The classical Darwinian theory of evolution can explain the evolution of adaptive traits only in asexual organisms. The frozen plasticity theory is much more general: It can also explain the origin and evolution of adaptive traits in both asexual and sexual organisms Read more
‹ VI.2.2.3 Unequal crossing-over can often result in multiplication of particular DNA sequences. up VI.2.3 The effects of molecular drive are most obvious in the evolution of repetitive sequences in related species. ›
Draft translation from: Evoluční biologie, 2. vydání (Evolutionary biology, 2nd edition), J. Flegr, Academia Prague 2009. The translation was not done by biologist, therefore any suggestion concerning proper scientific terminology and language usage are highly welcomed. You can send your comments to flegr