X.3.3.2 The genetic code was almost certainly not the work of a rational being

Another hypothesis assumes that the genetic code was formed as a product of the conscious activity of rational beings that could, themselves, function on a completely different biochemical principle.This theory is attractive at first sight, as it eliminates what is probably the greatest conceptual problem in protobiology and evolutionary biology (i.e. the formation of the genetic code).On the other hand, however, it hardly meets the criteria of a scientific hypothesis, i.e. the possibility of being falsified experimentally or otherwise.The main reason why this hypothesis is taken at least partly seriously is the fact that, in a certain sense, the genetic code is more reminiscent of a product of a rational being than a product of blind opportunistic evolution.As was pointed out some years ago in this connection by the Czech molecular virologist Vojtěch Závada, “It is difficult to believe that God was originally a trained telegraphist”.While most structures formed in biological evolution are, at first glance, the product of a random process, either because of the presence of nonfunctional rudiments or because of obvious imperfections (see, e.g., the classical example of the disadvantageous manner of innervation of the retina in the eyes of vertebrates), the genetic code looks, at first glance, like the perfect product of a rational plan.It will be shown below that this impression does not correspond completely to facts; in the framework of the universal genetic code, there are also certain irregularities and special features that bear indications of biological evolution.However, it is of greater importance that two genetic codes are required for proteosynthesis (deDuve 1988):the universal genetic code, which determines the key according to which the sequence of triplets in mRNA will be translated into an aminoacid sequence in the protein, and the operational RNA-code, which determines which aminoacid will be “charged” by a particular tRNA.While the universal genetic code is so regular that it tends to recall the more perfect Morse code alphabet, the operational genetic code is apparently far less regular and also less “universal”, especially in the structure according to which the enzymes of the aminoacyl-tRNA-synthetase  differentiates the individual tRNA (Schimmel 1989; de Pouplana & Schimmel 2001)(Fig. X.7).From this point of view, this code recalls any other product 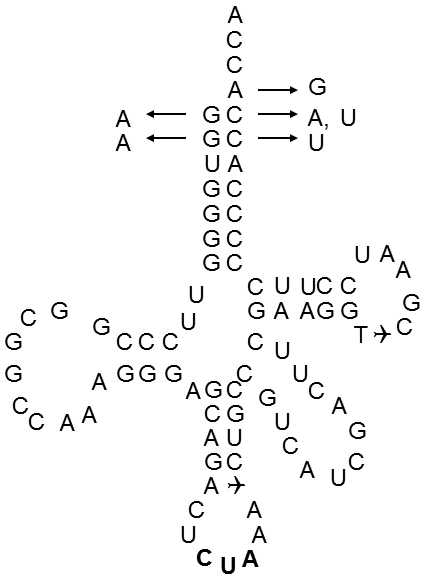 Fig. X.7. Elements of the operational RNA-code. Aminoacyl tRNA synthetase differentiates the individual transfer ribonucleic acids according to the various positions of the tRNA molecule. For most aminoacyl tRNA synthetases, the greatest importance lies in differentiation of the individual nucleotides of the anticodon sequence (denoted in bold); however, the various nucleotides of the acceptor branch usually also participate in the differentiation. The figure depicts the individual mutations, each of which leads to “charging” the given tRNA with glutamine instead of tyrosine. According to Schimmel (1989).

Was this information useful for you?
The classical Darwinian theory of evolution can explain the evolution of adaptive traits only in asexual organisms. The frozen plasticity theory is much more general: It can also explain the origin and evolution of adaptive traits in both asexual and sexual organisms Read more
‹ X.3.3.1 The present-day genetic code could have emerged as a consequence of a unique, highly improbable, random event. up X.3.3.3 There is evidence suggesting progressive development of the genetic code ›
Draft translation from: Evoluční biologie, 2. vydání (Evolutionary biology, 2nd edition), J. Flegr, Academia Prague 2009. The translation was not done by biologist, therefore any suggestion concerning proper scientific terminology and language usage are highly welcomed. You can send your comments to flegr