XIII. How Toxoplasma changes the appearance of its human host

As I mentioned, one way that we measured Suspiciousness with behavioral tests, was by asking the test subjects if we could take an anthropometric measurement. We then observed, how willing the person was to agree, and how cooperative they were during the measurement. A side-product of this test was that we were left with detailed anthropometric data for about 500 students. With each student we measured about 30 body parameters, including earlobe height and width, wrist width and head circumference. With this data available, we decided to see if Toxo positives and negatives differed in any of these measurements. We were primarily interested the so-called fluctuating asymmetry of Toxo positive humans. It’s commonly known that humans aren’t perfectly symmetrical; they may have a wider left or right wrist, or a longer left or right palm. The direction of the asymmetry differs among individuals, and even from organ to organ – sometimes the left side is larger, sometimes the right. This is why the asymmetry is termed as fluctuating. In addition, a number of organisms exhibit directional symmetry, which means that most of the members of a given species have one side of the body more developed. It is thought that the level of fluctuating asymmetry reflects the quality of an individual’s development – individuals that were exposed to more disruptive effects during their development, whether as the result of a mutation, an unfavorable gene combination from their parents or harmful environmental effects, turn out asymmetrical. Many scientists believe that females, including human females, choose the more symmetrical male during courtship, because his symmetry indicates a more likely favorable gene combination. Because many of our test subjects were infected as children, long before they finished development, we hypothesized that infected individuals would exhibit higher fluctuating asymmetry than those who were uninfected.

As always, our lovely Toxoplasma had a surprise in store. It turned out that Toxo positives and negatives exhibited minimal differences in fluctuating asymmetry, but significant differences in specific anthropometric measurements. If there was any asymmetry, then it was likely directional – in several anthropometric measurements, all the Toxo positives were asymmetrical to same side. Toxo positives had a wider forehead, a wider left ear, wider and longer palms, longer fingers on both hands and wider ankles. The most obvious difference that we noted in men had to do with body height – Toxo positive men were an average 3 cm taller than Toxo negatives (54).

Another difference that stood out was the length ratio of the pointer and ring fingers on the left hand. This was interesting, because scientists think that the ratio correlates negatively with the concentration of testosterone which the embryo is exposed to during intrauterine development. Men usually have a shorter pointer than ring finger, which means that the length ratio of the 2nd to 4th finger is less than one. In women, this difference isn’t as distinct – they often even have a longer pointer than ring finger, so the ratio is greater than one (Fig. 31). For each gender, the ratio correlates with a number of characteristics – in men, with sexual orientation, and mathematical and musical talent; in women, with things like fertility (Box 73 Do homosexuals have a longer pointer than ring finger?).

Whenever I mention this anatomical characteristic during a lecture, I might as well excuse myself from the podium, because the majority of the audience begins examining their fingers. Maybe they’re not sure about their gender identity or sexual orientation, and think that the ratio of finger length can serve as guidance. Another possibility is that they want to make sure that the speaker isn’t spouting nonsense (as is often our tendency). 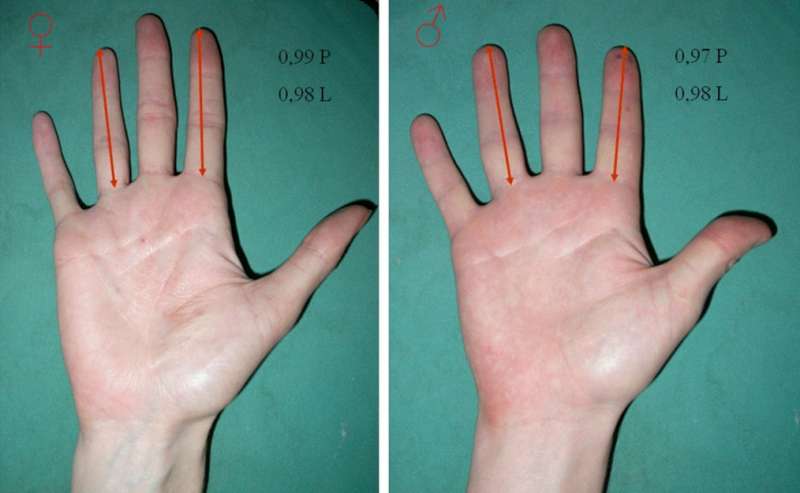 Fig. 31 The length ratio of the pointer and ring fingers. A typical woman hand (left) has a greater pointer to ring finger ratio than does the hand of a typical man (right). This means that her pointer finger is longer than a man’s is in comparison to the ring finger. The length ratio on the right and left hand for our female students was 0.986 and 0.981, respectively, and 0.972 and 0.979 for the male students. The difference between the genders is more apparent on the right hand, which corresponds with other reports. Interestingly, a similar difference between Toxoplasma-infected and uninfected people was more prominent on the left hand.

fingers on the right hand; there is a stronger correlation between Toxoplasma-infection and the length ratio of the fingers on the left hand. In women, the effect of toxoplasmosis on this ratio was also evident, but not statistically significant. Later, we verified that the concentration of testosterone in saliva correlates better with the ratio of the fingers on the left hand than the right. I’d say that the right hand seems to reflect the traits we were born with (the concentration of testosterone that were exposed to as a developing embryo), whereas the left reveals how we were affected in later life (by things such toxoplasmosis). But since something similar is already expressed by palm-readers, and we scientists put no stock in superstition, I wouldn’t say (or even write!) this under duress. In the conclusion of our published article, we simply stated that when studying the relation of psychological characteristics to the length ratio of the fingers on the left hand, it is important to statistically filter out the effects of Toxoplasma infection and testosterone concentration – these confounding factors could have a strong effect on the digit ratio for the left but not the right hand, and, if not controlled properly, might obscure any existing relationship of the digit ratio with the studied factors (55). Everyone must admit that such a statement is substantially different from supporting fortune-telling superstition; at least, written this way, it sounds more scientific. In any case, I suspect that most palm-readers don’t read the American Journal of Physical Anthropology too often.

Since we’ve already digressed to denying superstition: my colleague Lukáš Kratochvil and I also refuted one interesting belief regarding the length ratio of the pointer and ring fingers. This belief was the central postulate of people studying this field; it was the belief that an individual’s gender (as well as most of other characteristics) influences that length ratio. True, this ratio is lower in men than in women, but our results clearly showed that this is only because men usually have larger hands. As the size of the hand increases, the length of the ring finger increases at a greater rate than does that of the pointer. If we made pairs, each of a man and woman with hands of the same size, we’d see no difference in the length ratio of the 2nd and 4th fingers. So it is more correct to say that characteristics like musical talent, homosexuality and fertility, correlate with the length of the hand, rather than the length ratio of the 2nd and 4th fingers (56). The difference, of course, is substantial. It’s difficult to imagine how the concentration of testosterone would specifically affect the length of the 2nd versus the length of the 4th finger. It’s less surprising that the level of testosterone would affect general growth of the hand and fingers (Box 62 Troubles with ratios).

Testosterone affects anatomical growth in two ways, and its effect on body height and shape depends on the developmental phase in which the individual is exposed to greater levels of the hormone. On one hand, testosterone speeds up longitudinal bone growth; but on the other hand, it causes

experience increased body growth. It’s likely that in countries where infection occurs even earlier, or significantly later, the effect of toxoplasmosis on the body height of men is different, maybe even opposite.

Was this information useful for you?
The classical Darwinian theory of evolution can explain the evolution of adaptive traits only in asexual organisms. The frozen plasticity theory is much more general: It can also explain the origin and evolution of adaptive traits in both asexual and sexual organisms Read more
‹ XII. Why does Toxoplasma shift personality traits in opposite directions in men and women up XIV. Cherchez la testostérone! ›