When we discovered that Toxo positive and negative men differ in the length ratio of their fingers, as well as body height, we immediately considered the possibility that the relative differences in psyche and morphology could be caused by a change in testosterone levels. Testosterone levels are known to have a significant effect on a number of human characteristics, ranging from behavior to anatomical proportions. One of these characteristics is the masculinity of an individual’s appearance. Because we had many photographs of students as a by-product of our tests for Suspiciousness (Vigilance), we had material on which to test our hypothesis on that there were higher testosterone levels in Toxo positive men. We had the female students of another college, who didn’t know our students, evaluate the level of masculinity and dominance of the men on the photographs, based on an eight-point scale. From these evaluations, we calculated an average value of visually-determined masculinity and dominance for each student. True to our hypothesis, it turned out that Toxo positive men appear significantly more masculine and dominant to female evaluators than do Toxo negative men. But after conducting the same (reciprocal) test with the photographs of the female students, we found that male evaluators didn’t see any appreciable difference in femininity and dominance between Toxo positive and negative women (57).

We wanted to show the readers of our article the differences in appearance between Toxo positive and negative men, without making public the photographs of our students. To this end, we used composition photography, a technique invented by Darwin’s cousin, Francis Galton. To see what the typical criminal looked like (something that would be near-impossible today, for reasons of political correctness), he exposed a number of individual photographs of criminals on photographic plate, creating a single composite portrait. Today the techniques for composite photography are a bit more 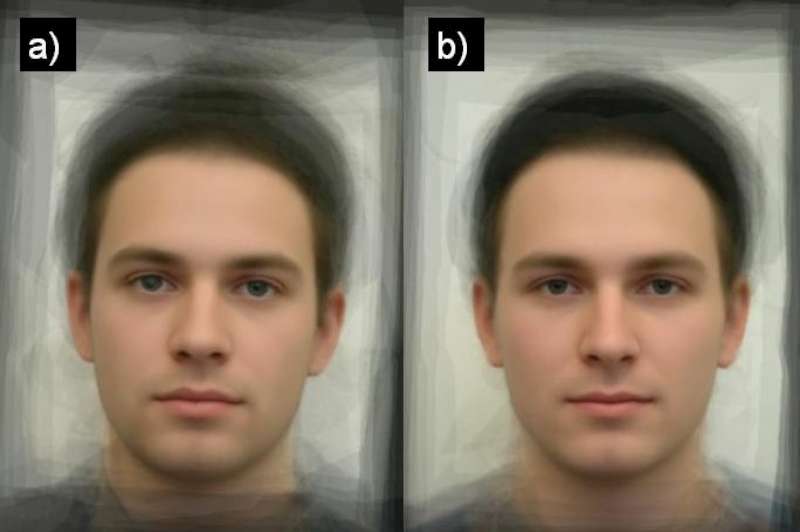 Just as an aside, since we already had a program set up for evaluating characteristics from photographs, along with the data from the Cattell’s questionnaire’s, we decided to see if our evaluators would be able to guess some of the characteristics of the students, based only on the photographs of these students. We had already determined the students’ characteristics using the psychological questionnaire. In her study, Anna Kotrčová-Rubešová discovered that women in particular are pretty spot-on in their guesses. Their guesses regarding the Cattell’s factors of Warmth (A), Liveliness (F) and Social Boldness (H) correlate strongly with the factors determined with Cattell’s questionnaire. Men were not as talented in this discipline, but nevertheless managed to guess some characteristics of the photographed people surprisingly well. We must also realize that the evaluators had only a single photograph of that person’s face (with the hair edited out) to work with; furthermore, the photographed people had been instructed to pose with a neutral expression. In normal, everyday life, a person gets much more information with which to evaluate others – and so it’s likely that they are also more successful in this endeavor. As Věra Pivoňková proved later on, women were even more successful in guessing psychological traits when they were given composite

photographs consisting of several people that achieved an extreme score for a given factor (a very high or low value).

Of course, it’s a question whether the physiognomy of the human gradually changes to match his personality, or whether the human learns to behave and think to match what his environment expects from him based on his appearance (Box 64 Are brown-eyed men more dominant than the blue-eyed, and is it because of their eyes?). When perusing the panopticon of our leading politicians, I sometimes wonder if a person who looks like a bastard at first glance, might be a bastard in real life. It’s probably not politically correct, but what if there was something to it? 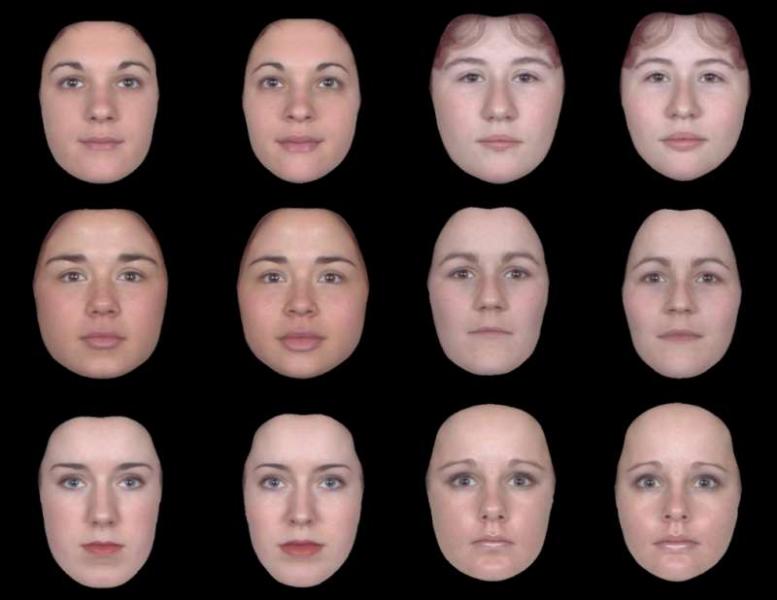 Fig. 34 Use of composite photography and a morphing technique to determine preferences for self-similar persons. Each pair of pictures was created through computer modification (morphing technique) from one original composite. In each pair of composite photographs, the picture on the right was made more similar to the features of the evaluator, and the picture on the left less similar – by adding or subtracting, respectively, the characteristics features of the evaluator from face on the composite photograph. The original composite pictures were formed from three (in each case different) photographs of students from England. The evaluator was to determine which of the two faces in his pair is more attractive. Among female evaluators, the preference for self-similar faces changed over their menstrual cycle. 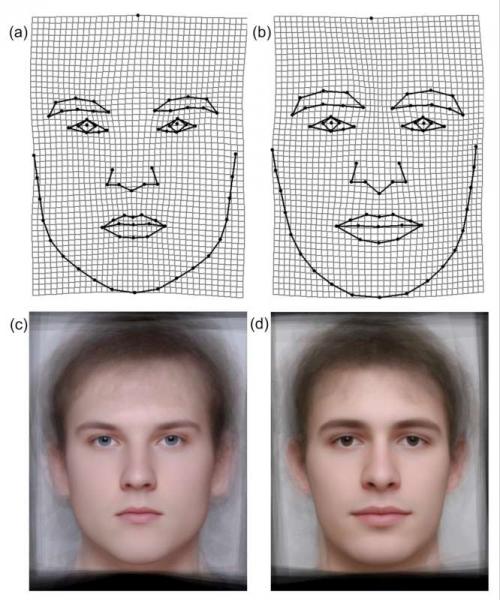 Fig. 35 Differences in the face shape of blue-eyed vs. brown-eyed male students. The bottom two pictures are composite photographs of the average blue-eyed (left) and average brown-eyed (right) student of the College of natural sciences. The top two pictures have the typical characteristics from the bottom composites (the differences between the left and right figure) enhanced by computer. Based on these morphological features, student evaluators ranked individual photographs of originally brown-eyed students as more dominant than those of originally blue eyed students, even after we used a computer program to change the eye-color from brown to blue or vice versa. Regardless of eye-color, female evaluators perceived originally brown-eyed students more dominant. These results are surprising since eye color depends more or less on one gene, so in each generation brown eyes should “move from” one face to another, and not be connected to a certain type of face.

We repeated the same study with a different group, a fairly large group of patients from an immunological clinic who were primarily treated for allergies and immunodeficiencies. With this group, we were unable to prove a relationship between toxoplasmosis and the level of testosterone (or estradiol or cortisol). What was interesting, however, was that the level of testosterone in men increased with time after infection (this time was estimated based on the decrease of specific Toxoplasma antibodies). It’s apparent that this group experienced the sieve effect, which could have impacted our results. In the Czech Republic, toxoplasmosis is about equally prevalent in men and women. But in our group of 312 women and 228 men, toxoplasmosis occurred in 24% of the women (which is close to the normal value) but only in 10.9% of the men (ridiculously below average). As I explain in a later chapter, Toxoplasma significantly influences the immune system of both men and women. Whereas Toxo positive women show signs of a more active immune system, Toxo positive men show signs of immunosuppression. It’s possible that Toxo positive men are protected against allergy, so we find very few of them among the patients of an immunological clinic. It’s even possible that the immunosuppression in Toxo positive men is caused by the increased testosterone levels. The 14 Toxo positive men that made it into our group may have had a deficiency in testosterone production, so even Toxoplasma couldn’t save them from allergies. That would explain why we were unable to find higher testosterone levels in the infected men of this group, even though their testosterone levels increased with time after infection. Of course this is only a hypothesis, which needs to be verified in the future (Box 65 How are hypotheses tested in science?).

To get back to something more specific: naturally, we didn’t cast aside our hypothesis at the first sign of conflicting results. We expected that Toxoplasma raises testosterone levels in men; and we discovered a group in which infected and uninfected patients had the same testosterone levels (the Toxo positives even had them a little lower). Instead we modified our hypothesis: “in the general population, Toxoplasma-infected men have higher testosterone levels; but in a population of patients with allergies and immunodeficiencies, they have the same and maybe even lower testosterone levels as a result of the sieve effect” (see the mechanism that includes the effect of immunosuppression, described in the main text). And so we salvaged our hypothesis. When it becomes too complicated, we’ll abandon it, so you won’t have to wait around for my retirement. I’m usually not too enamored with my hypotheses and theories – I prefer inventing new ones.

Originally we didn’t know what molecular mechanism Toxoplasma could be using to influence the behavior and psyche of its host. Currently, we sort have the opposite problem. We have several factors that could be responsible for the changes in behavior and psyche in infected people. First there is dopamine, which we think may affect the tendency towards “novelty seeking.” In this case, the psychological shift occurs in the same direction in men and women. Then there is testosterone, which could be responsible for the changes in other psychological factors. Furthermore, increased levels of testosterone in men and decreased levels in women could explain why a number of psychological and behavioral characteristics shift in opposite directions in infected men and women. Another question is whether these factors – testosterone and dopamine – are really independent of each other, or whether changes in testosterone might be caused by raised levels of dopamine.

Was this information useful for you?
The classical Darwinian theory of evolution can explain the evolution of adaptive traits only in asexual organisms. The frozen plasticity theory is much more general: It can also explain the origin and evolution of adaptive traits in both asexual and sexual organisms Read more
‹ XIII. How Toxoplasma changes the appearance of its human host up XV. Does Toxoplasma cause schizophrenia? ›