Gametes and their multicellular organism have a common gene pool for their evolution.However, because they are exposed to different selection pressures, situations must necessarily occur in which a certain gene is exposed to two opposing pressures.From the standpoint of the chance of a multicellular organism surviving to reproductive age, it could, for example, be advantageous if the Michaelis constant for a certain substrate is a reduced for a certain enzyme while, from the viewpoint of the chance of microgametes rapidly finding macrogametes, it could be, to the contrary, advantageous if this constant is increased.As the intensity of the selection pressure on the gamete can be greater than the intensity of the selection pressure on its multicellular organism, it could easily happen that the interests of the gamete would predominate over the interests of the organism and evolution would proceed towards an increase in the Michaelis constant and thus in an undesirable direction from the viewpoint of the multicellular organism.

The most effective mechanism capable of limiting inter-gamete competition and thus also the subsequent autonomous evolution of gametes consists in inactivation of genes in the mature gametes.For example, it is known that most of the genes in the sperm of vertebrates are completely inactive and that neither transcription nor subsequent translation occurs on them (Ward 1994).Highly condensed nuclear material, i.e. an indirect indication of gene inactivity, is found in the microgametes of most animals, plants and protozoa.Thus, most of the properties of sperm are not determined by the set of genes borne by the particular sperm, but by the set of genes of the multicellular organism controlling the processes of spermatogenesis and spermiogenesis in the sex organs.However, recent results have indicated that, in spite of the condensation of chromatin, expression of a great many genes occurs in microgametes.In plants, possibly up to 20 thousand genes are expressed in pollen grains and it has even been observed in vertebrates that some of the expressed genes affect such an important trait from the viewpoint of intergamete selection as flagella mobility (Olsson & Madsen 2001).

It is also known for a great many animals that the female does not leave the sperm to their fate in her reproductive organs following copulation (Pizzari & Birkhead 2000; Tschudirein & Benz 1990).Cases have been described in many species of animals, including human beings where the sperm in the reproductive organs are passively drawn in or rapidly moved by peristaltic motion to the sites where fertilization is to occur (Baker & Bellis 1993b).It cannot be excluded that the female thus prevents intergamete competition, here a race amongst the sperm for the fastest pathway to the egg.

In addition, the cryptic choice hypothesis assumes that the processes occurring in the female reproductive organs are a continuation of sexual selection (Birkhead 1995).Through manipulation with the ejaculate, the female is capable of subsequently determining which sperm of the males with whom she recently copulated will finally fertilize the egg cells.Some authors have even suggested that, in this “decision-making”, the females are capable of “taking into consideration” the genotype of the individual sperm and their own genotype so that, in the final analysis, they allow the egg to be fertilized, for example, only by those sperm that ensure heterozygosity of the progeny for genes important for resistance, for example genes for MHC-antigens (Wedekind 1994; Lopez-Leon, Cabrero, & Camacho 1996; Stockley 1999) (Fig. XIV.3).Similar phenomena have also been observed for plants.Here, selection apparently occurs through affecting the rate of growth of the individual pollen tubes (Matthys-Rochon, Gaude, & Dumas 1987; Charlesworth, Schemske, & Sork 1987; Wendel, Edwards, & Stuber 1987). 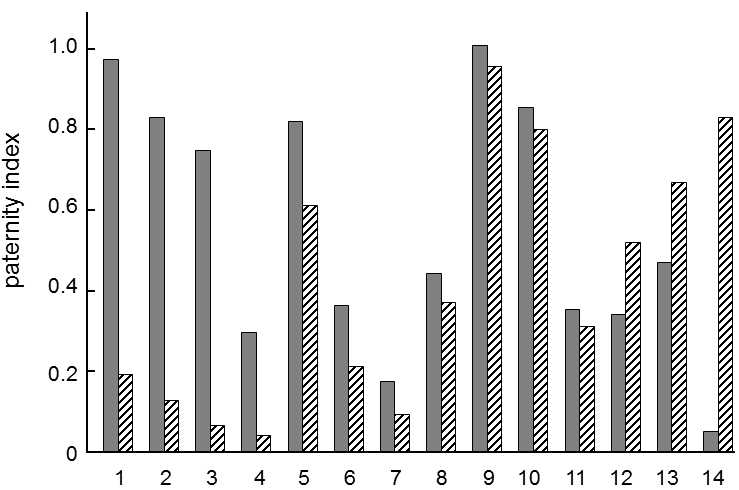 Unambiguous interpretation of the results of experiments studying cryptic choice is somewhat complicated by the ability of females to affect the viability of progeny through uneven investment into the individual embryos.It has, for example, been observed that the females of zebra finch (Taeniopygia guttata) that were able to copulate with more attractive males produce eggs with higher testosterone concentrations (Vogel 1999).In the traditional arrangement of experiments, i.e. without the use of artificial insemination, it is thus frequently not possible to decide whether the uneven success of the individual males is a result of cryptic choice occurring at the level of competition between sperm or classical sexual selection occurring at the level of the adult individuals.Results to date using artificial insemination indicate that it is possible that the cryptic choice mechanism also allows females to select males exhibiting quite specific phenotype traits, including the degree of expression of classical secondary sexual traits or body size (Evans et al. 2003)(Fig. XIV.4). 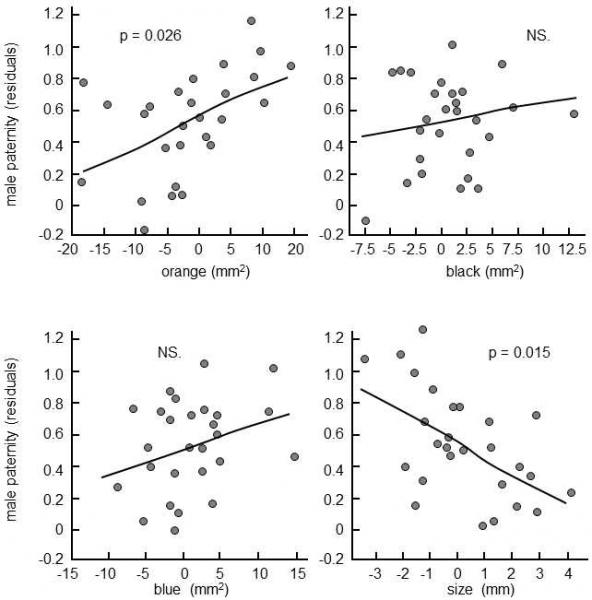 Fig. XIV.4 Competition of sperm in fish studied using artificial insemination. Guppy (Poecilia reticulata) females were artificially inseminated using an identical amount of sperm derived from two different males and the paternity of the offspring was determined using microsatellite markers. The results indicated that, even in this unnatural situation, the reproductive success of the male was positively correlated with the area of the orange spot, i.e. with a trait that females preferred during sexual selection. However, simultaneously, it was negatively correlated with the size of the male, i.e. with a trait that either has no effect on the result of sexual selection or tends to give the male an advantage. The abscissa corresponds to the difference in the particular trait between males A and B, while the ordinate corresponds to the paternity of male B after eliminating the effect of the other monitored traits, i.e. partial residuals from the relevant regression straight line. A total of 27 broods were monitored, each of which had an average of 11 young. According to Evans et al. (2003).

Was this information useful for you?
You voted 'not at all'.
The classical Darwinian theory of evolution can explain the evolution of adaptive traits only in asexual organisms. The frozen plasticity theory is much more general: It can also explain the origin and evolution of adaptive traits in both asexual and sexual organisms Read more
‹ XIV.3 Multicellular organisms exhibit a cycle of alternating gamete and multicellular organism stages; natural selection can operate both among gametes and among multicellular individuals up XIV.3.2 The selection arena hypothesis assumes that, on the contrary, females of some species create conditions for the most efficient operation of intergametic selection ›
Draft translation from: Evoluční biologie, 2. vydání (Evolutionary biology, 2nd edition), J. Flegr, Academia Prague 2009. The translation was not done by biologist, therefore any suggestion concerning proper scientific terminology and language usage are highly welcomed. You can send your comments to flegr