XIV.3.2 The selection arena hypothesis assumes that, on the contrary, females of some species create conditions for the most efficient operation of intergametic selection

Some authors are of the opinion that, under certain circumstances, the female can, to the contrary, create conditions for the most effective intergametic competition.It is known that the females of a great many animal species repeatedly copulate with a large number of different males.The arena hypothesis assumes that the purpose of this behavior consists in accumulation of sperm samples from a large number of males, thus creating conditions for effective competition between sperm derived from various individuals (Birkhead, Moller, & Sutherland 1993; Telford & Jennions 1998; Zeh & Zeh 1996).However, this hypothesis assumes that there is a positive correlation between the biological quality of sperm and the biological quality of the multicellular organism.

The assumption that the biological quality of an individual is highly correlated with the competition potential of his sperm is rather bold; however, there is no reason why this should be rejected a priori.While organisms have created some mechanisms that prevent the emergence of competition between the sperm derived from a single individual (see, e.g., the above-mentioned inactivity of their genes), on the other hand the properties of the sperm are quite certainly determined by the quality of the genome of the male.Consequently, it can be expected that the quality of the sperm produced and thus its chance of success in the arena could depend on the biological quality of the males.Even if this were not true, it is still possible that sperm derived from various males compete in the arena independent of their quality but in dependence on their number.The situation is much more favorable in this case, as it can be expected almost with certainty that there exists a correlation between the quality of the male and the number of sperm that he can afford to produce.

It has so far been verified only in a very few cases that promiscuity amongst females increases the fitness of the progeny.For example, it has been observed in the common yellow-toothed cavy (Galea musteloides) that females that were allowed to copulate with four males raised a larger number of healthy progeny that females that could copulate with only a single male; simultaneously, the size of the litter did not differ (Keil & Sachser 1998)(Fig. XIV.5). 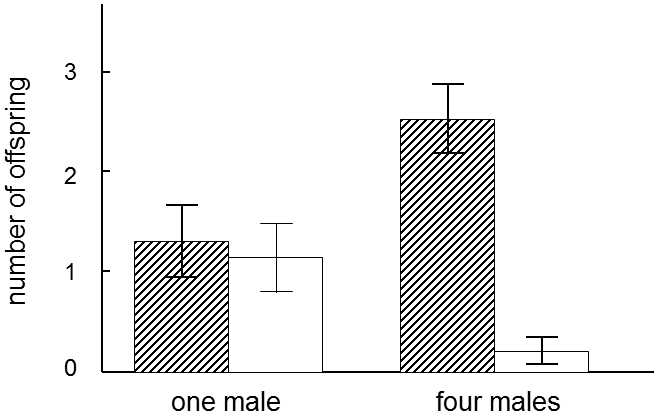 Was this information useful for you?
The classical Darwinian theory of evolution can explain the evolution of adaptive traits only in asexual organisms. The frozen plasticity theory is much more general: It can also explain the origin and evolution of adaptive traits in both asexual and sexual organisms Read more
‹ XIV.3.1 Multicellular organisms mostly seem to try to prevent intergametic selection up XIV.4 The possibility of separate microgamete and macrogamete production in multicellular organisms creates conditions for the evolution of gonochorism ›
Draft translation from: Evoluční biologie, 2. vydání (Evolutionary biology, 2nd edition), J. Flegr, Academia Prague 2009. The translation was not done by biologist, therefore any suggestion concerning proper scientific terminology and language usage are highly welcomed. You can send your comments to flegr