XIX.5.2 Potential superinfection substantially limits a parasite’s ability to optimize its reproduction rate and the degree of pathogenicity

The possibility of optimizing (and thus also of reducing) the rate of reproduction and the pathogenicity of a parasite is not limited only by the formation of genetic variability directly within the infrapopulation of parasites.It is limited even further by the possibility of multiple infection of a single host by genetically unrelated strains of parasites, i.e. the possibility of superinfection (Fig. XIX.8).In both cases, the genetic variability increases in the infrapopulation and systematic selection of “selfish” individuals multiplying at a greater rate than would be optimal from the viewpoint of the entire population (Bonhoeffer & Nowak 1994). 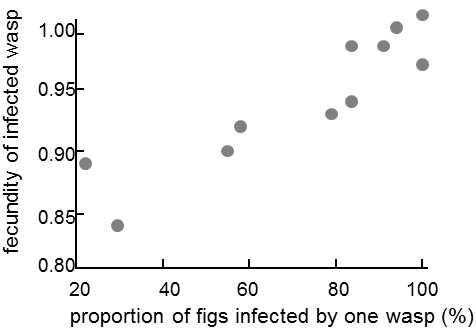 Fig. XIX.8 Increase in the virulence of parasitic nematodes in dependence on the host ecology. The graph shows that species of fig wasps, in which a greater percentage of the population places only one wasp in the fig and where the nematode of the Parasitodiplogaster genus is most frequently transmitted vertically, from parents to offspring, are influenced by the effects of parasitization less on an average than species in which the population of wasps usually have more than one progenitor in each fig. The greater number of progenitors increases not only the probability of horizontal transmission of the infection, but also the genetic variability of the local parasite population. Thus, it is not clear which of these factors is responsible for the decrease in virulence in the case of the Panama fig wasp, i.e. for the decrease in fecundity of wasps attacked by the parasite compared to wasps not attacked by the parasite. Data from Herre (1993), according to Poulin (1998).

An increase in the growth rate within an infrapopulation and the related increase in the pathogenicity of the relevant parasitosis as a consequence of superinfection is of great importance from the standpoint of epidemiology.If, for example, a suitable epidemiological intervention manages to reduce the incidence of infection, i.e. the number of individuals infected per time unit, not only is the prevalence of infection, i.e. the number (percent) of infected individuals in the population, reduced, but also, as a consequence of reducing the frequency of superinfection, there is usually also a reduction in the pathogenicity of the relevant parasite.The trends in intestinal bacterial infections in countries where good water purification has been introduced are a typical example.This step was taken in the U.S.A. in the first quarter of the 20thcentury; in the 1930’s the “virulent” (i.e. highly pathogenic) strains Shigella dysenteriae had already been replaced by less pathogenic strains S. flexneri; again, in the 1950’s these were replaced by even more benign strains of S. sonnei.Waste water treatment plants were introduced and the pathogenicity of dysentery decreased sooner in England, while both the introduction of waste water treatment and decrease in the pathogenicity of dysentery occurred later in Poland.Similar developments were also observed for Salmonella typhi and Vibrio cholerae.

An increase in the probability of superinfection connected with increased genetic diversity of the parasite population is apparently the main reason for the great danger presented by hospital infections (Ewald 1994).In the U.S.A., infections acquired in a hospital, i.e. nosocomial infections, are the fourth most common cause of death.For example, at the present time, salmonellosis acquired outside a hospital environment is practically never fatal.However, salmonellosis acquired in a hospital is a cause of death in approximately one of seven infected patients and this can increase to one in three in some epidemics.Similarly, Staphylococcus aureus bacteria normally infect about 40% of the population but are not particularly harmful to their carriers.However, the prevalence of these bacteria reaches approximately 70% in hospitals and infection is accompanied by highly pathogenic symptoms that are frequently fatal to patients.

There is a substantial increase in the virulence of parasitosis during military conflicts.Wars are frequently accompanied by the concentration and movement of large numbers of persons and a general decrease in hygiene standards.In some cases, there have been enormous concentrations of sick people at a single place and thus the creation of ideal conditions for selection of especially virulent strains of parasites.For example, during the IstWorld War, an evacuation hospital in France had 340 beds for patients with respiratory diseases; as many as 824 people passed through per day, and a total of 34,000 people passed through over a three month period.The influenza epidemic that broke out in 1918 three months before the end of the war and which lasted approximately half a year had approximately a 10-fold higher fatality rate than influenzas in times of peace.During this period, 20 – 40 million people died, i.e. far more than those that died directly as a result of the IstWorld War.After about three years, the death rate from influenza returned to normal, i.e. to a value of less than 0.1%.Similarly, during the American Civil War, 3% of those infected died from diseases with diarrhoea in the first year.Towards the end of the war, the fatality rate from diarrhoeal diseases increased to 20%.Simultaneously, this was apparently not a consequence of the reduced resistance of soldiers following from suffering during the war because, for example, the fatality rate from malaria was the same throughout this period.Basically, up to the IIndWorld War, far more people died from infectious diseases during military conflicts (in recent times, primarily typhus and epidemic typhus) than as a result of war wounds.For example, it has been estimated that 10-20 times more soldiers died from parasitic diseases than in battle during the American War of Independence (Ewald 1994).

Was this information useful for you?
The classical Darwinian theory of evolution can explain the evolution of adaptive traits only in asexual organisms. The frozen plasticity theory is much more general: It can also explain the origin and evolution of adaptive traits in both asexual and sexual organisms Read more
‹ XIX.5.1.1 The frequent incidence of clonal reproduction in parasitic organisms may be an adaptation to limit individual selection up XIX.5.3 Interpopulation, interspecific or species selection is sometimes considered to be a cause of reduced virulence in parasites ›
Draft translation from: Evoluční biologie, 2. vydání (Evolutionary biology, 2nd edition), J. Flegr, Academia Prague 2009. The translation was not done by biologist, therefore any suggestion concerning proper scientific terminology and language usage are highly welcomed. You can send your comments to flegr