XIX.5 Host-parasite coevolution often leads to changes in the pathogenic manifestations of parasitosis

The ability of a parasite to survive and reproduce in the host organism and the ability of the parasite population to survive consistently in the population of the host species are a consequence of gradual evolutionary adaptation of the parasite to the particular host species (Kaltz & Shykoff 1998).If the host species comes into contact with a new range of potential parasites, for example if it invades a new territory, it is generally resistant to parasitization by unspecialized parasites.Escaping from the reach of the original parasites is usually considered to be the most important cause of the ecological success of a great many invasive species (Mitchell & Power 2003; Torchin et al. 2003) (Fig. XIX.5).Only after a longer period of time are some parasites that occur in the given territory able to adapt to a new host sufficiently to survive consistently in the population of new hosts and are thus able to bring the spreading of the invasive species under control. 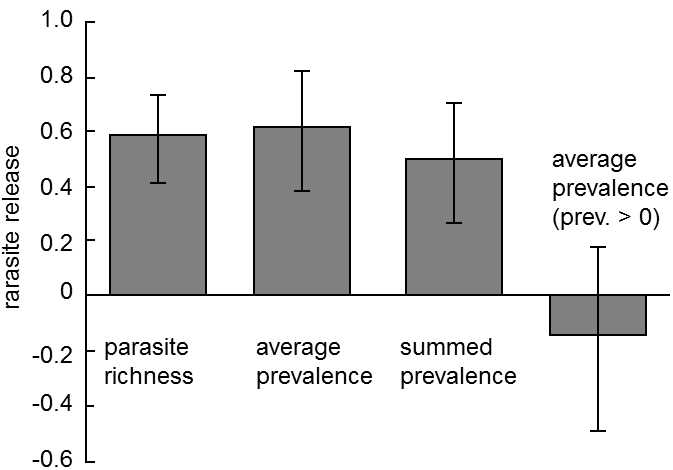 However, in some cases, the pathogenic manifestations of infection by an unadapted parasite are very drastic, so that in a great many cases it ends with the death of the host organism.These cases are apparently far rarer than cases where an unadapted parasite is not capable of reproducing at all and of substantially damaging the new host.However, from the viewpoint of humans, these cases are more obvious and thus they get far more publicity.If the population of hosts survives the meeting with the new parasite, changes gradually occur in the progress of the infection and, understandably, also in the dynamics of its spreading in the host population.Specifically, the pathogenic manifestations of parasitosis are reduced, so that the originally fatal infection is gradually reduced to a milder sickness and, in extreme cases, can even end up practically free of symptoms (asymptomatic) (Combes 1997).The well-documented history of the intentional introduction of the virus of rabbit myxomatosis into Australia (Fig. XIX.6) is a textbook case of reduction of the pathogenicity of infection that has been well documented. 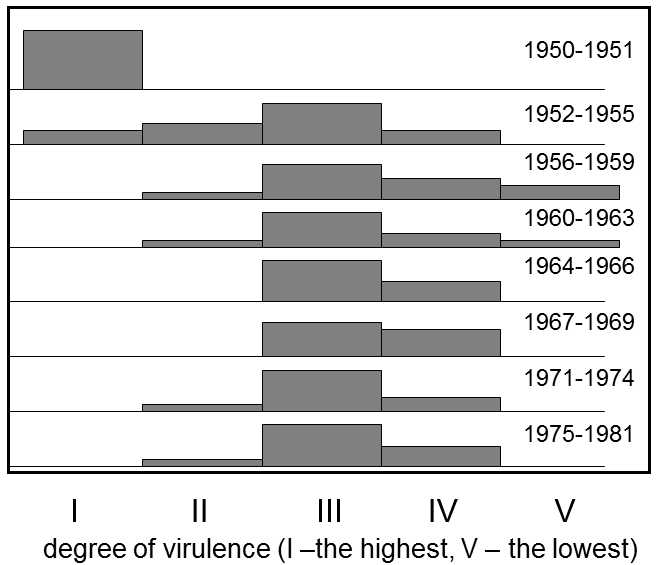 Fig. XIX.6 Changes in the virulence of myxomatosis viruses after introduction into Australia. It is apparent from the histograms that the greatest virulence (measured as the death rate of infected rabbits) was exhibited by myxomatosis immediately following introduction, i.e. in 1950, while the lowest was in 1956 – 1959. The virulence of the infection increased again at later dates. The dying out of the most virulent strains in the first years following introduction into Australia was probably a result of the fact that the viruses killed their hosts so fast that insect vectors were not capable of transferring the infection to another host. The dying out of the less virulent strains in the following years could have been caused by the fact that the prevalence of infection increased as the virulence decreased, leading to increased frequency of superinfections and, during them, the slowly multiplying viruses succumbed to competition from rapidly multiplying strains. According to Fenner (1994).

The phenomenon of gradual reduction in the pathogenicity of parasites, described commonly but rather inaccurately as the phenomenon of reduced virulence (see XIX.4.1), is, on the one hand, influenced by evolution of the host organism and selection of individuals that are more resistant to reproduction of the pathogen and to the pathological manifestations of its action in the organism and, on the other hand, selection within the parasitic species is important here, as parasites that do not excessively damage their hosts can produce more infectious stages and infect more hosts during their existence in a single host organism. 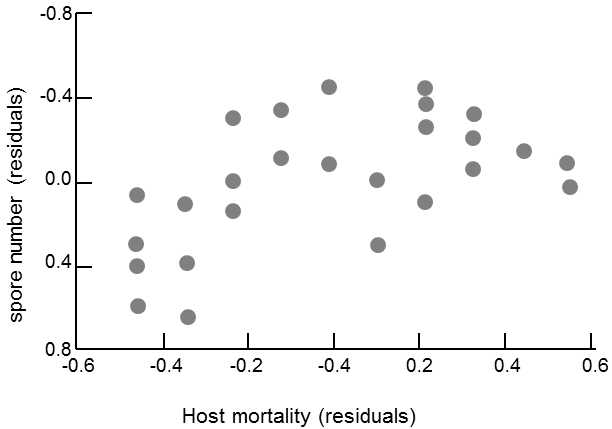 Fig. XIX.7 Correlation between the rate of reproduction of a parasite and mortality of the host. The number of spores of Pleistophora intestinalis (Microsporidae) formed on an average by the relevant strain of parasite in the digestive system of infected Daphnia magna is correlated with the mortality of the host. However, the dependence is not monotonous; this is a sharply positive dependence for strains forming a subaverage number of spores. However, the dependence tends to be negative for parasite strains forming a large number of spores in the host. The residuals were calculated by statistically eliminating the differences in sensitivity to infection in various host strains. Data from Eberta (1994), according to Eberta and Herrea (1996).

Was this information useful for you?
The classical Darwinian theory of evolution can explain the evolution of adaptive traits only in asexual organisms. The frozen plasticity theory is much more general: It can also explain the origin and evolution of adaptive traits in both asexual and sexual organisms Read more
‹ XIX.4.1.1 The infrapopulation growth rate can be zero under certain conditions up XIX.5.1 Genetic variability within the infrapopulation counters the development towards limited pathogenic manifestations of parasitosis ›
Draft translation from: Evoluční biologie, 2. vydání (Evolutionary biology, 2nd edition), J. Flegr, Academia Prague 2009. The translation was not done by biologist, therefore any suggestion concerning proper scientific terminology and language usage are highly welcomed. You can send your comments to flegr