The fact that some groups of parasites are closely adapted to a particular host species or small group of host species means that transmission from one host species to another is relatively rare in these parasites even on an evolutionary scale or occurs only within a group of related species.However, this means that, as the host species is subject to speciation, i.e. individual daughter species split off during evolution, the parasite must also undergo speciation.Cospeciationoccurs in the parasite and the host.Enforced speciation of the parasitemay be caused by genetic drift following separation of a subpopulation bound to both daughter species and thus after separation of their gene pools.In many cases, however, this is apparently also strengthened by natural selection, adaptation to two, now mutually different, host species.Of course, sometimes host speciation need not necessarily be followed by speciation of the parasite; a single species of parasite can attack a relatively broad group of mutually related species.However, such a situation generally occurs when the host species live in the same territory (sympatrically) or when the parasite is spread by intermediate host species, which have sufficient mobility and habitats encompassing the habitats of all the related host species.s 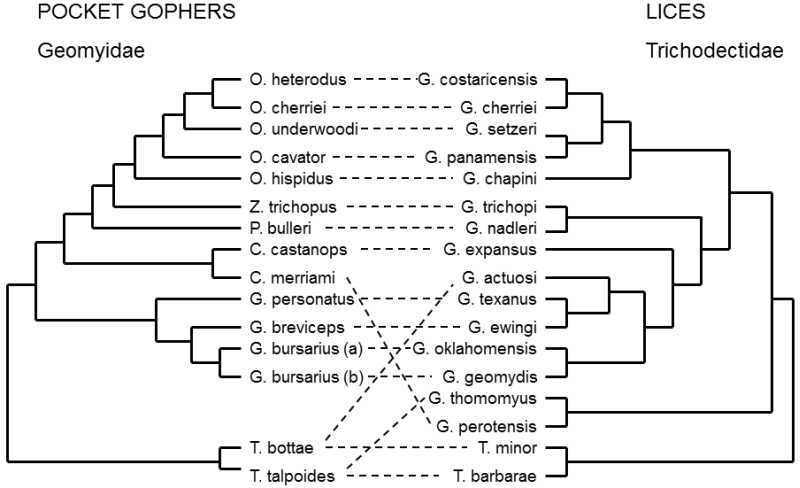 Fig. XIX.19 Parallel cladogenesis of hosts and their parasites. The cladogram of the host taxon, American pocket gophers (Geomyidae), is similar to the cladogram of its parasites, lice of the Trichodectidae family. The cladogenesis of the hosts and their parasites apparently runs in parallel to a substantial degree in this case; only in three cases is one species of pocket gopher host to two species of lice and, in one case, a pocket gopher is host to lice that it apparently acquired when it was laterally transferred from another species. It is understandably possible that, in the future, its “own” lice will be found for this species (Cratogeomys merriami). Phyolgenetic trees have been constructed by the method of maximum parsimony on the basis of sequences of genes for subunit I of the mitochondrial cytochrome C-oxidase. Genuses of pocket gophers: Orthogeomys, Zygogeomys, Pappogeomys, Cratogeomys, Geomys, Thomomys. Genuses of lice: Geomydeocus and Thomomydeocus. According to Hafner et al. (1994).

the phylogenetic tree of the host taxon, it is often possible to approximately estimate the phylogenetic trees of its parasites (and vice versa).  This Fahrenholz rule was first apparently published in 1896 by Kellogg (Brooks & McLennan 1993).It is, of course, possible that, in some cases, the parasite can transfer to some other host organism, especially if the parasite is not particularly specialized, i.e. has a broader host spectrum.A parasite can also “miss the boat”, i.e. may be absent at the critical moment in the host subpopulation that, in time, results in the formation of an independent species, or could become extinct over time in a host species.In this case, the phylogenetic trees of the parasite and host need not be identical or can contain individual anomalies that are externally manifested, for example by crossing of the relevant branches of the cladograms. Empirical data indicate that better similarity is exhibited between the cladograms of hosts and their parasites when the relationship of the two organisms tends to be mutualistic and that the similarity is less in cases of actual parasitism.For example, the cladograms of Wolbachia bacteria in insects are far less similar to the cladograms of their hosts than those of Wolbachia bacteria and Filaria (Moran & Baumann 1994; Casiraghi et al. 2001).This is apparently a result of the fact that a coevolutionary “arms race” occurs between the parasite and the host, in which the host occasionally manages to successfully shake off its parasite.However, this success is usually only temporary; the empty niche can be secondarily occupied by a different species of parasite that is often not related to the original species.

Was this information useful for you?
The classical Darwinian theory of evolution can explain the evolution of adaptive traits only in asexual organisms. The frozen plasticity theory is much more general: It can also explain the origin and evolution of adaptive traits in both asexual and sexual organisms Read more
‹ XIX.6.6 Some pathogenic manifestations of parasitoses can effectively facilitate transmission of the parasite up XIX.8 Anagenesis in parasites sometimes includes reducing the organism’s complexity ›
Draft translation from: Evoluční biologie, 2. vydání (Evolutionary biology, 2nd edition), J. Flegr, Academia Prague 2009. The translation was not done by biologist, therefore any suggestion concerning proper scientific terminology and language usage are highly welcomed. You can send your comments to flegr