Altruistic behavior has always been subject to heightened interest from evolutionary biologists.  The origin and prolonged endurance of altruistic behavioral patterns cannot be explained by the mechanism of individual (intraspecific) selection; consequently its relatively frequent incidence in nature long remained a mystery to biologists.

Another mechanism that may be responsible for the origin of altruistic behavior is kin selection (Hamilton 1964a; Hamilton 1964b).  As the theory of interallelic selection (the selfish gene theory) stresses, the decisive criterion for fixation or loss of a mutated allele is not how the allele contributes to the fitness of the individual in whose genome it is located, but how it contributes to spreading the copies of the allele in the particular locus inside the gene pool of the population (Dawkins 1976).  Some alleles may contribute to spreading their copies within the gene pool so that their bearer increases, through his altruistic behavior, the fitness of the other bearers of the same allele, usually his relatives, at his own expense (Fig. XVI.5). Once again, it seems that the existence of some patterns of altruistic behavior can be explained by this mechanism. 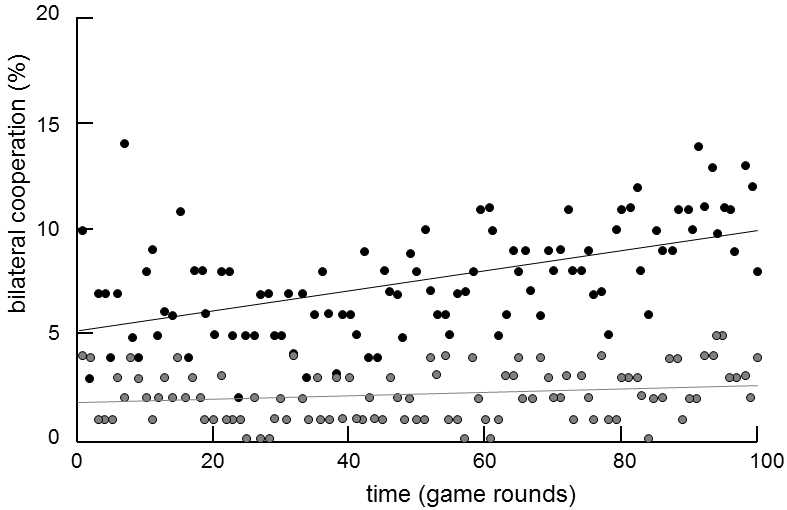 Fig. XVI.5 The impact of genetic relationship on the willingness to cooperate. Willingness to cooperate was tested in 59 monozygotic and 37 dizygotic same-sex twins using the prisoner’s dilemma game. During the experiment, siblings each sat in a different corner of the room and had to raise a red or a blue mark. If both raised blue marks (cooperation), each received 3 pence. If both raised red marks (betrayal), each received one penny. If one raised the blue mark and the other the red mark, the red-mark twin received 5 pence and the blue-mark twin did not receive anything. Each pair of twins played 100 games in total. The chart shows the evolution of average cooperation during 100 games for monozygotic twins (black points) and for dizygotic twins (grey points). Cooperation was expressed as the average of the number of bilateral cooperations (valued at +1) and bilateral betrayals (-1). Unilateral betrayal was calculated as 0 points. The chart demonstrates that the level of cooperation was, on an average, higher and grew continuously during the experiment in genetically more related individuals, i.e. monozygotic twins, while it remained low throughout the experiment in dizygotic twins. After Segal and Hershberger (1999).

In species with a sufficiently well-developed neural system and sufficiently well-developed social structure of populations, behavioral patterns have become fixed that lead to punishing less altruistic individuals or even to punishing individuals who do not participate in punishing less altruistic individuals (Gintis, Smith, & Bowles 1901; Okamoto & Matsumura 2000). These behavioral patterns, of course, greatly promote the existence of altruistic behavior. The subject of reciprocal altruism will be further treated in the section devoted to competition of strategies in the sphere of games with repeated interactions between players (XVI.5.3).

Was this information useful for you?
The classical Darwinian theory of evolution can explain the evolution of adaptive traits only in asexual organisms. The frozen plasticity theory is much more general: It can also explain the origin and evolution of adaptive traits in both asexual and sexual organisms Read more
‹ XVI.4 From an evolutionary point of view, individual behavioral patterns can be divided according to how they will influence the fitness of their bearer and the fitness of other individuals in the population up XVI.4.2 Spiteful behavior is not very widespread in nature ›
Draft translation from: Evoluční biologie, 2. vydání (Evolutionary biology, 2nd edition), J. Flegr, Academia Prague 2009. The translation was not done by biologist, therefore any suggestion concerning proper scientific terminology and language usage are highly welcomed. You can send your comments to flegr