XVII.1 Some adaptive characteristics evolve and change in the process of cultural evolution

The basic criterion that allows us to decide whether certain behavior is a product of biological evolution or of cultural evolution consists in the result of an isolation experiment.In an isolation experiment, a sufficiently hard-hearted experimenter isolates the young from adult individuals as soon as possible after their birth and monitors which patterns of behavior develop in them and which do not.Then he quietly hopes, in the worse case even expects, that only an unsubstantial part of the observed differences in the behavior of the animals is a result of their social deprivation or some other undesirable, although highly probable experimental artifact.If it is not possible to perform an isolation experiment, for example when studying the behavior of humans, a comparative study can be performed, for example with identical twins brought up by different parents (Fig. XVII.1).However, comparative studies will tend to over-evaluate the role of heredity.It is quite possible that the families that each adopts one of a pair of siblings will be similar in some way, so that the siblings will be exposed to relatively similar environments. 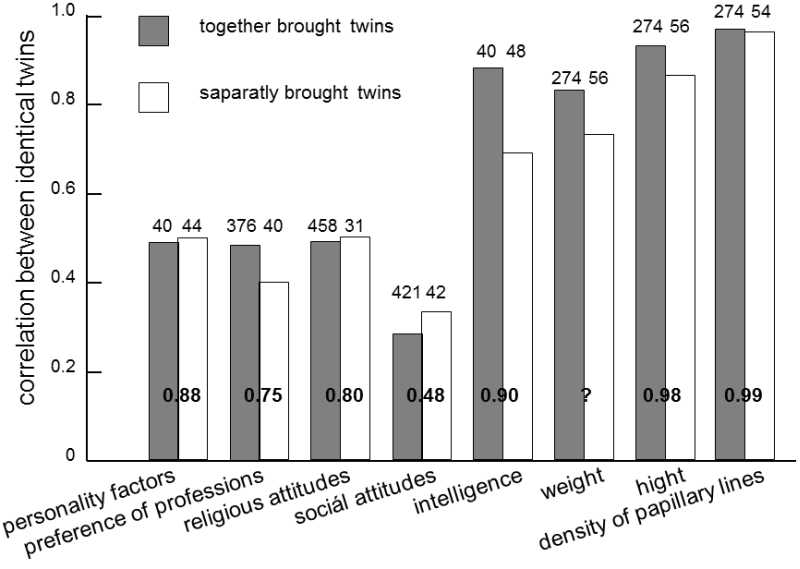 Fig. XVII.1 Comparative studies addressing the effects of heredity and the environment on the morphology, behavior and attitudes of humans.  In the study, the similarity (correlation) of their personal traits, interests and attitudes were compared for pairs of identical twins brought up together (grey columns) and separately (white columns). The multidimensional personality questionnaire (MPQ) was used to determine their personality traits, their preference of profession was determined using the Minnesota 17-item scale of interests in a profession, their religious attitudes were found using the average of the values measured on two scales of attitude related to religion, their social attitudes were determined using the average of 14 items not related to religion and their intelligence was measured using the Wechsler adult intelligence scale (WAIS). The heights of the columns correspond to the degree of variability in the particular set that can be explained by shared genes, the numbers above the columns correspond to the numbers of pairs of twins and the numbers inside the columns correspond to the reproducibility of the particular test, i.e. the correlation between the results obtained when repeating the relevant test for the same person. The authors point out that the reproducibility of tests measuring personality factors, attitudes and interests mostly lies only in the range 0.6 – 0.7, which also determines the maximum value of the correlation that can be measured for the given factors using the comparison studies. It is apparent from the existence of only small differences between sets of twins brought up together and separately that genetic factors are of decisive importance in determining psychology and behavior in humans. According to Bouchard et al. (1990).

Was this information useful for you?
The classical Darwinian theory of evolution can explain the evolution of adaptive traits only in asexual organisms. The frozen plasticity theory is much more general: It can also explain the origin and evolution of adaptive traits in both asexual and sexual organisms Read more
‹ XVII CULTURAL EVOLUTION up XVII.1.1 Some adaptive characteristics evolve and change in the process of cultural evolution ›
Draft translation from: Evoluční biologie, 2. vydání (Evolutionary biology, 2nd edition), J. Flegr, Academia Prague 2009. The translation was not done by biologist, therefore any suggestion concerning proper scientific terminology and language usage are highly welcomed. You can send your comments to flegr