Coevolutionof a predator and its prey, parasite and its host or two species competing for utilization of a certain resource or having a common predator, and even the coevolution of two mutualistic species very frequently has the character of a sort of “arms race”.A certain new evolutionary feature emerges in one of the species, increasing the fitness of its bearers at the expense of members of another species, and thus it gradually spreads in the population of this species (Fig. XVIII.1).Such a new evolutionary feature could, for example, consist in stronger jaw muscles, enabling a predator fish to crack the shell of a certain kind of snail and include it in its diet.This would create a selection pressure on the snail to create a stronger shell, or to synthesize a poisonous or terrible-tasting substance to defend itself against attacks by the fish.The emergence of such an adaptation in the snails would produce a selection pressure on the predatory fish which, sooner or later, would lead to the creation of a suitable counter-strategy, enabling it to somehow overcome the effect of the new evolutionary trait in the snail – for example, through the formation of even stronger jaw muscles or of sharper horny jaws, or the emergence of some suitable pattern of behavior that would enable it to break even stronger shells.A new round in the arms race can be started by either the “attacker” or the “defender” and the participants in this race need not be only a pair of species, but can even consist in large groups of mutually interacting species. 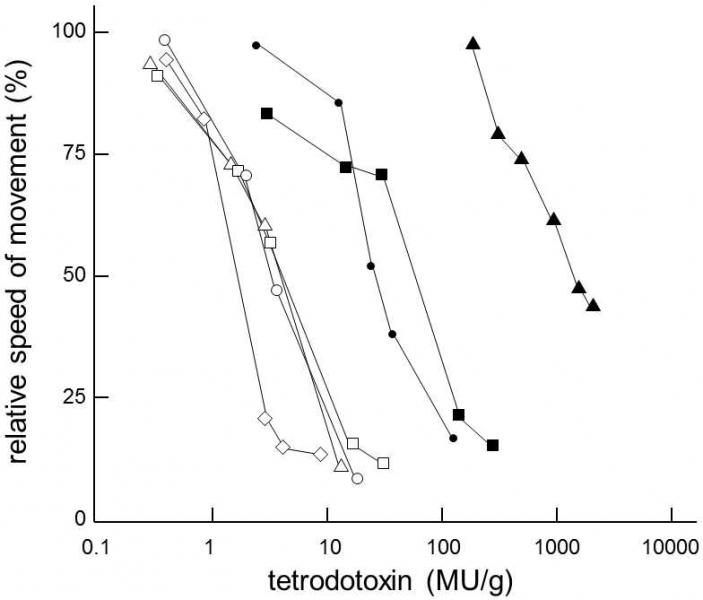 Fig. XVIII.1 Arms races between predators and prey. The graph depicts the resistance of Thamnophis sirtalis grass snakes to tetrodotoxin, a poison contained in the skin of rough-skinned newts, Taricha granulosa. These grass snakes are apparently the only predator capable of eating the poisonous newts. It has been found that the resistance of the grass snakes to the poison, measured as the percentage reduction in the speed of movement following intraperitoneal injection, differs by up to three orders of magnitude. A low level of resistance (white points) is exhibited by grass snakes in areas where the newts do not occur or in areas with populations of salamanders not containing tetrodotoxin. Even sensitive grass snakes are still relatively resistant to the action of the poison. Thirty units (U) of the poison correspond to the amount that is sufficient to kill a 30 gram mouse. According to Brodie and Brodie (1999).

A great many paleontologists assume that some rapid changes in fauna that occurred in certain short periods in the history of the Earth, with the simultaneous participation of an enormous number of species, emerged as a product of just such arms races.A certain new evolutionary feature emerged in one species, creating a selection pressure on a great many species in the environment; they had to somehow react adaptively to this pressure, other species had to react to their reactions, so that the wave of anagenetic changes could finally affect a great portion of the species in the particular ecosystem in a very short period of time (Morris 1995).

Was this information useful for you?
The classical Darwinian theory of evolution can explain the evolution of adaptive traits only in asexual organisms. The frozen plasticity theory is much more general: It can also explain the origin and evolution of adaptive traits in both asexual and sexual organisms Read more
‹ XVIII.3 Only species capable of permanent, sufficiently swift adaptation to changes in the biosphere can survive in the long-term up XVIII.4.1 Races can take place at both interspecific and intraspecific levels ›
Draft translation from: Evoluční biologie, 2. vydání (Evolutionary biology, 2nd edition), J. Flegr, Academia Prague 2009. The translation was not done by biologist, therefore any suggestion concerning proper scientific terminology and language usage are highly welcomed. You can send your comments to flegr